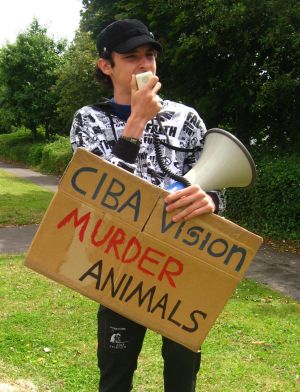 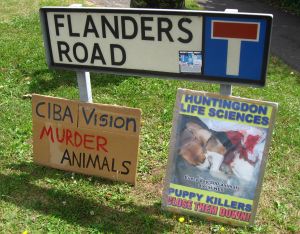 Our numbers were once again very strong and our chants were loud. Our megaphone time was greeted with even more support than usual too and one guy, who had his dog in the passenger seat, was so shocked and appalled at what he had seen that he stopped to talk about the campaign for a good few minutes.

People were, as ever, shocked to learn that Novartis (who own Ciba) not only pay HLS for tests, but they have a horrific human rights record and even had to pull a drug off the market because it causes birth defects and miscarriages.

Mr Grumpy was, as he often is now, grumpy and even tried to push the protesters around (so much for free speech). But his bully tactics to try and silence the truth simply because we are a bit loud and visual, only lead to us being more determined to have the best protest possible.

As the people in the court case, today's demo was dedicate to have proved, no one can bully SHAC into silencing what is the truth. And the truth is the
HLS are on their knees, these protests are working, public support is growing week in, week out and our campaign is winning.

Until Every Cage is empty. 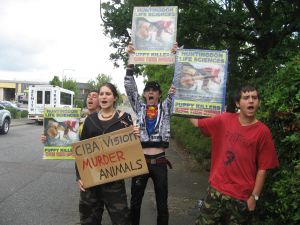