On 30 July, the staff of the Centre for Civil Society (CCS) at Durban's University of KwaZulu Natal, were told that as of 31 December 2008, CCS would be permanently closed. As the following article suggests, reasons for this are shoddy at best, and clearly point to this being a political decision on the part of the University to snuff out its left brain. 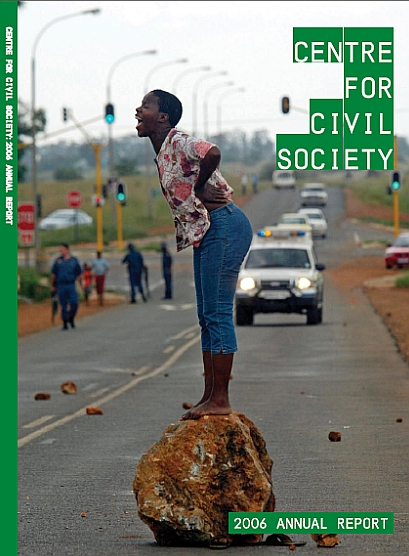 Since its inception the Centre for Civil Society has been a highly active and productive unit documenting and interrogating the social laboratories of Durban, South Africa, Africa and the world, where contradictions generated by globalisation and the flawed character of post-colonial politics create conflict.
The Centre is a powerful advocate of civic rights and it does not shy away critical scholarship. The Centre has been at the head of debate and action on issues of environmental justice, and global and African integration. It has also been at the helm of action groups like Abahlali baseMjondolo, an advocacy group for housing for the poor.
As for people, its current director, Patrick Bond, is known to many for his extensive work in South Africa, as well as further afield, for example through columns appearing on Z Communications among many others (

http://www.zcommunications.org/zspace/patrickbond).
One of its founders, and first Director, Adam Habib (now vice Chancellor at the University of Johannesburg), is a prolific scholar and tireless advocate. In 2006 he was branded a terrorist by United States Department of State for criticising the US war in Iraq, and has had his visa revoked (for more see:

http://www.nu.ac.za/ccs/files/DemocracyAndSocietyS08.pdf).
Honorary Professor, Denis Brutus, poet and anti-apartheid activist who was sentenced to eighteen months of hard labor on Robben Island during the apartheid era, is currently involved with many others in the pursuit through the US court system of reparations from corporations that profited from South African apartheid (for more see: www.ukzn.ac.za/ccs/default.asp?2,40,5,1607 or one of his many interviews with Amy Goodman of Democracy Now! www.democracynow.org/2008/7/8/landmark_case_returns_to_ny_seeking)
It is highly questionable as to why the Centre is being forced to close, while repeated requests for reasons have been ignored (

http://www.nu.ac.za/ccs/default.asp?2,68,3,1575). Reasons given have hinged on financial instability, however this is simply not an issue as the article at the above link suggests, where the accounts and future funding prospects for the CCS are deemed healthy. Moreover the decision overturnes the official recommendation of a five-month University Research Review finalised in February, which advocated strengthening the centre and giving it more autonomy: "Closing down or removing the centre from UKZN does not appear to be an option as it was rejected by all interviewees and panel members. Through its international recognition and standing, the centre has put UKZN on a world map in social science, a position the university dare not risk to lose."
Much confusion now seems to exist within the University as regards this decision (see article linked at the end of this).
But for the moment, the future of the CCS remains uncertain. However, staff members, associates and supporters have determined that it cannot be allowed to die.

If you have testimonials about the wisdom of closing CCS, for or against, please let contact

UKZN may snuff out its left brain
What's next for Durban's best-known institute of social and environmental justice?