Yesterday (wednesday 6th August) there were more examples of resistance to the blanket stop and search imposed by police around the Climate Camp.

Following the previous days mass 'walk-in', where a large group of people simply walked through the police search area after complaining that 2 hour waits to be searched were not acceptable, on wednesday a group of around 30 people left the camp as a protest and refused to be searched.

It's interesting to note that the Police later lied about this to the media in their latest press release saying:

"More than 30 people leaving the camp on Wednesday morning with their belongings approached police and told officers they do not want to be associated with any criminal activity. ACC Beautridge commented: 'It is unfortunate for all concerned that there appears to be a hardcore minority, intent on criminal activity or unlawful protest, who are diverting attention away from the issues that most people have come here to raise."
(see

This outright lie was refuted by the Climate Camp media team and on the CC website, but of course it hasn't stopped mainstream media publications from running with the story, with The Herald printing the headline "Coal-power protesters shun criminal activity".

The Climate Camp website hit back saying: "This press release is totally consistent with the police's ongoing campaign to disrupt, deligitimise and smear our campaign against building a new coal-fired power-station at Kingsnorth. Climate camper Terry Graves said, "Another day, another totally unsubstantiated claim from top cop Gary Beautridge. None of this is stopping us from having the conversations we need to have to tackle climate change. We won't be distracted."

There were also several other incidents throughout the day with police being heavy handed over the imposition of searches. The pictures below are video captures from Medway Messenger video filmed by Steve Bodycombe as police move against a group objecting to the searches and the long waits to get into the camp in what their reporters described as distressing scenes. Several arrests were made.

Despite the behaviour of the police, people are still arriving at the camp, although several people are complaining that the police action is designed to put off local people visiting the camp. 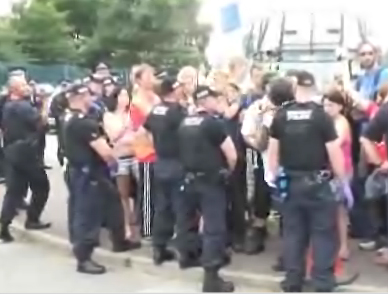 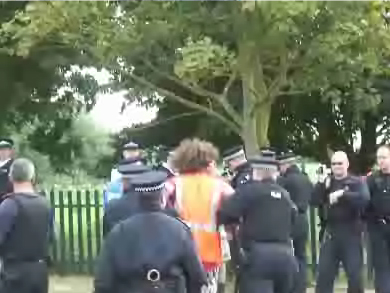 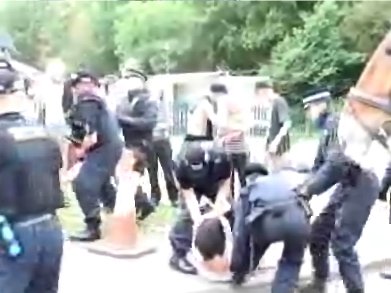 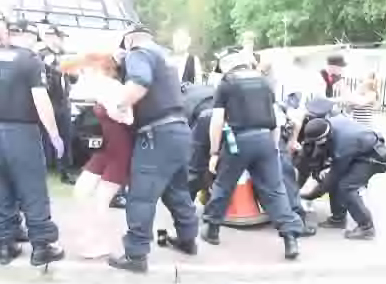 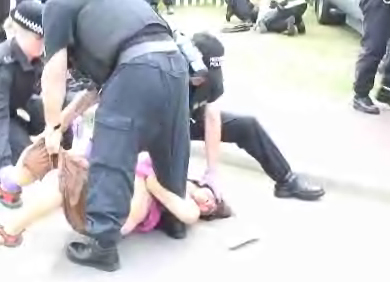 For the video see:

For more video of protests against the stop and search on wednesday 6th (from bbc se) see:

For more video about the absurd searches see this activist video:

For video of Mass Walk-In on Tuesday 5th August see:

Please repond with meaningful and well thought out reponse, they seem to get a lot of Daily Mail readers and Coppers replying.