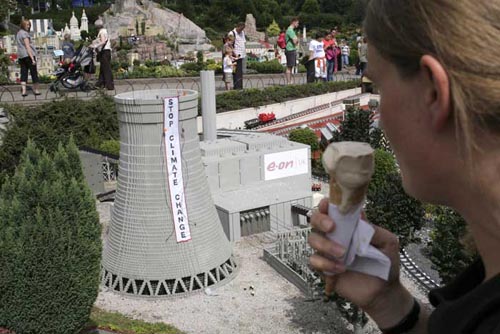 E.ON’s replica of the Kingsnorth coal-fired power station has been occupied by one inch tall climate change campaigners. The drama unfolded at the Legoland park in Windsor – sponsored by E.ON – where the Lego Kingsnorth is given pride of place next to Big Ben and Canary Wharf.

The Lego campaigners struck as hundreds of people gather at this year’s Climate Camp to protest the planned new coal plant at Kingsnorth in Kent.

The six campaigners appeared at the top of the construction at around 11am this morning, before unveiling a banner saying STOP CLIMATE CHANGE down the length of the tower. Lego police are in attendance at the foot of the tower, along with a Lego police helicopter.

E.ON proudly announced the construction of Britain’s newest coal-fired station at Legoland in 2006. The German utility giant is Britain's single biggest greenhouse gas polluter. The company is aiming to have Kingsnorth 2 built by 2012. Despite claims that the new plant will be more efficient, it is estimated that it will emit 8.4 million tonnes of climate changing pollutants every year, compared to the 8.7 million tonnes the existing plant releases annually, and nowhere near the 80% reductions needed to combat global warming.

Neither the campaigners nor the police would comment, because they’re made of Lego and therefore can’t talk.