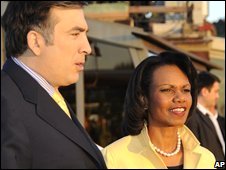 Georgia is a close ally of the US and major player in Zbigniew Brzezinskis wet dream "the grand chessboard". It is part of the US strategy to weaken Russia by provoking conflicts on its boarders.
What the US seem to forget: all good chess players are russian....

A few hours ago Russia was officially asked by South Ossetia and Abchasia for military protection, russian troops are already heading towards Georgia and Ossetia. No doubt: Georgia will loose this "game".

The question is: why did Georgia start this war? There´s no doubt Saakashvilli won´t do any step without the order and knowledge of Washington. Why going into war with Russia?

Is there perhaps a major US plan - may be a war against Iran? Forcing Russia to focus on "its" problems, instead of mixing in into the Iran thing? Attacking Iran while China ist the host of the Olympic Games? So that China will be kind of bound...?

Speculations... But, the questions remain...