Information Links & Sources for the (short) war in South Ossetia

On any one day there is war somewhere on this planet. Either with a big double U or a little one. But some will be interested in information sources and news resources on the current conflict in South Ossetia because it is the first time Russian troops have engaged since the collapse of the USSR.

First link really should be to the people who invited them to engage not those who provoked them. 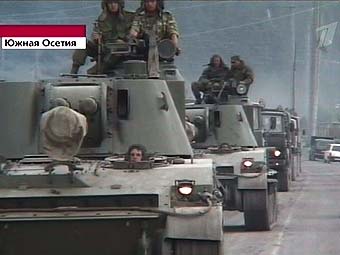 The State information & press commitee of the republic of South Georgia at 13h54 local time (GMT+4) :-

"The massive, intensive shelling of Tskhinval continues. The city is under the worst shelling. The peaceful population of the capital Tskhinval-RSO is in the shelters in their houses, some of them have no longer this opportunity, because their houses destroyed. There are still a lot of children, women and the elderly in the city at the moment. According to available information at this time, despite ongoing hostilities, the city is not taken by Georgian troops, and continues to resist. Georgian armed formations have pursued a course on the total destruction of Ossetian people. They do everything possible to erase from the face of the earth the Ossetian Human Settlements.
The people of South Ossetia, hoping again to Russia, request assistance in the face of fascism and destruction of Georgia. Guiltless citizens of South Ossetia, Russia citizens are dying in their houses. And the exact number of deaths can not be established."

that followed quickly on reports of a Georgian bombardment of southern villages and road links running north - south by SU-25 planes. "In these minutes Georgian SU-25 planes dropped bombs on the peaceful citizens of the Republic of South Ossetia. SU-25 also strikes at ossetian village Kvernet, and bypass road,Zar, the only road, which links South Ossetia with the North. Perfidious massive bombardment of Tskhinval by the morning became more intense. In the city and its environs are fighting with heavy weapons. The people of South Ossetia requests assistance from the President of the Russian Federation Dmitry Medvedev and the Government of Russian Federation to take urgent measures to protect the residents of South Ossetia, which are citizens of the Russian Federation and to do everything to stop the genocide of the Ossetian people. According to preliminary data, in the city killed more than 15 civilians. The Georgian convoy of tanks and infantry is moving towards Tshinval. Already devastated a large part of the town. Several buildings in the center of the city burn. Parliament House RYUO burned, the government buildings complex is damaged. High-rise housing and other residential buildings are burning."

The people they asked through the tunnels under the mountains to fight their corner and the cause of South Ossetian independence are called "the Russians".

You might have heard about their military might which they got through being lucky enough to inherit most of the former USSR's military arsenal and personel. They have not had an opportunity to use them since, least not on another former state of the USSR, this is thus very good for their morale especially as the Georgians are the only former state of the USSR to be named after not just one but three US presidents.

this is the official news agency of Russia

The Georgians think they are completely to rights to be old-fashioned Serbian if they want to. Their version is of seperatists who don't want to be Georgian and have said so consistently since the USSR ended, being really stroppy lsat night which meant they had to send in precision bombers with laser guided missiles a few hours later they talked to all the diplomatic core and then they talked to the Americans again around tea-time by which stage :-

"8 June 2008 it [had] became known to the government of Georgia that on 8 August 2008 large amount of heavy military equipment and personnel belonging to the Russian Federation illegally entered the territory of Georgia through the Roki Tunnel. The Russian side openly declares that the task of these military units is to support the criminal regime of Tskhinvali in the fight against the government of Georgia.
Russian military aircraft three times bombed the Marneuli airbase on the territory of Georgia. Dead and wounded were reported among the base personnel as a result of the bombings while several Georgian airplanes were destroyed"

They are also experiencing server difficulties. & it can be difficult to persuade them to give you a page of information complete with the little cookie. War does that to people, makes them suspicious and stingey and untrustworthy too.

Who wants to be piggy in the middle and get the credit for sorting it out : you might ask?

So far the best hope for an intermediary would appear to be the Ukraine, whose president Viktor Yushchenko has sent his special envoy to the capital of Georgia to urge restraint. This is very important for to the Ukranians for many reasons. Least of all it makes them look good in the eyes of Europe. You may remember how Mr Yushchenko became if not a household name quite probably the only president of a former USSR state whose name you recognise. You'll remember how Viktor had lunch with the chiefs of the Ukranian secret services (who had been trained in the old KGB & have odd fluctuating good/bad relations to the current FSB) & how then Viktor got really ill after that meal & then he went to Switzerland & then London to see the toxicologists. There was quite a bit of speculation as to what had done that to him. Remember he went from matinee good lucks to Chernobyl swarthy alcoholic ugly in a few weeks. Finally people learnt he had been got with "dioxines". Later analysis proved that the dioxines were exactly the same as those that come from Agent Orange the stuff the USA used to drop on Vietnam to kill its weeds and weedy wee children and stop them turning commie.

http://www.timesonline.co.uk/tol/news/world/article403513.ece Yushchenko of course led the Orange party so it was all quite witty.. & quite splendidly he had been given enough agent Orange to make him ugly but not to kill him - but get everyone curious & remember his name and then notice Yulia Tymochenko's plaited hair, which let's be honest got really fashionable for a while. Anyway, I'm sure the Ukranians don't nurse grudges & will be delighted to broker peace. Here's their statement on being up for mediation :-

http://www.mfa.gov.ua/mfa/ua/news/detail/14631.htm
and here's there latest update (which I don't understand only recognising the important words "south" and "ossetia")

http://www.mfa.gov.ua/mfa/en/news/detail/14633.htm
& so let's hope their relevant press office hurries along with English translations.

In addition the Wikipedia people have started a page on the South Ossetia war.

http://en.wikipedia.org/wiki/War_in_South_Ossetia_%282008%29
It's quite a popular thread with the type of people who like writing and re-writing these things as it's "wikirage" profile shows. (Wikirage is a page which shows you which entries are receiving the most edits per unique editor over various periods of time).

"almost every sport derives from battle or hunting or gathering skills"