New report shows RBS is Cashing in on Coal 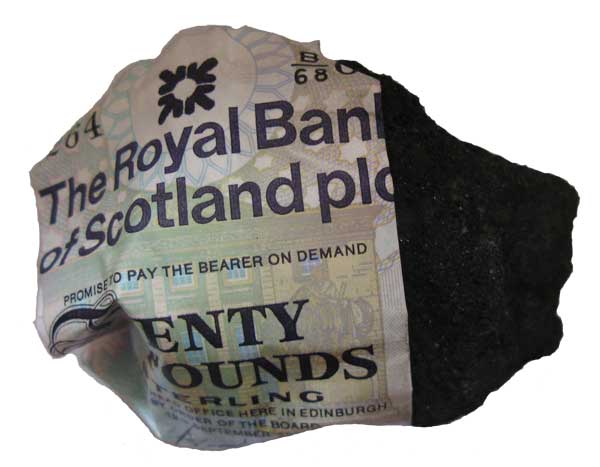 The Royal Bank of Scotland (RBS) has helped provide loans ofalmost $16 billion to coal-related companies over the last two years, according to detailed estimates in a report today by a coalition of environmental NGOs [1], including Friends of the Earth Scotland, People & Planet and Platform. The report compiles public evidence of coal industry financing by UK banks in the last two years, and reveals that RBS has helped lend more money to the coal industry, in more deals, than any other major UK bank.[2]

Many of the loans documented by the research have been made to companies that are the subject of sustained controversy and criticism from various quarters. Notably RBS, HSBC and Barclays were involved in loans worth over $70 billion to the energy company E.ON over the course of 2007. E.ON plans to build the first new coal-fired power station in the UK for 30 years at Kingsnorth in Kent, where thousands of climate change activists from all over the UK recently gathered for a week long camp opposing the development [3]. E.ON does not plan to install carbon capture technology to reduce the power station’s climate-changing emissions. [4]

Climate activists twice targeted RBS' premises in London over the course of the week in protest over the bank’s fossil fuel financing. On Thursday 7 August, a student group staged a ‘die-in’ in pools of oil outside the RBS headquarters [5]. On Friday 8 August, activists from the camp superglued themselves to the front entrance of the RBS Oil and Gas Division, with a banner that read ‘RBS: Cashing In On Coal.’ [6]

Amongst the 22 companies benefiting from RBS lending is Arch Coal [7], which uses the controversial coal mining practice called Mountain Top Removal. This destroys the tops of entire mountains and produces large quantities of toxic sludge. Arch Coal alone has been responsible for the disappearance of 300,800 acres of biologically diverse hardwood forest through this practice.

Duncan McLaren of Friends of the Earth Scotland:

“Coal is just about the dirtiest, most inefficient fossil fuel there is. RBS is providing the financial means for companies to build new coal-fired power stations which don't capture their carbon emissions, and dig new mines all over the world, yet still refuses to disclose full information on the fossil fuel projects it helps finance, or to take any responsibility for the emissions that result.

“Just last week people came from all over the country to protest against the proposed new coal fired power station at Kingsnorth. If RBS and the other banks don’t stop financing such climate-trashing projects they risk a similar public backlash.”

“This report is only a partial picture based on what information we can find. Banks have a duty to give the public a full disclosure about fossil fuel financing so that account holders can choose whether or not they want their money to be used to support new coal projects like Kingsnorth power station.”

“Students across the country are demanding that RBS pull out of fossil fuels and focus their investments and experience into supporting renewable energy development. If RBS continues to fund climate change, students are prepared to boycott.”

The report can be downloaded from


[1] The coalition of groups consists of Friends of the Earth Scotland, People & Planet, Platform, BankTrack, Stop Climate Chaos and Scottish Education and Action for Development.

[2] The report shows that between May 2006 and April 2008, HSBC was involved three times in coal loans, Barclays 17 times, while RBS participated in 27 different loans. The total value of the loans that the banks were involved in was $38.24 billion for Barclays, $71.09 billion for HSBC, and $95.83 billion for RBS.

Most loans involve a consortium of banks, so these figures do not represent the actual sums for which each bank is responsible. Given the lack of public data as to the exact breakdown of each banks’ involvement, an estimated calculation can be made by dividing each loan by the number of banks involved, and then attributing an equal slice of the pie to each participant.

Based on this process of estimation, Barclays was responsible for an estimated $5.79 billion, HSBC $10.10 billion and RBS $15.93 billion.

[4] E.ON’s submitted plans do not include carbon capture and storage (CCS). The company has entered a Government competition that might provide funding for a small scale CCS demonstration project on the site, but this would apply to only a small fraction of the planned capacity.

[7] In October 2006, RBS participated in an $800 million revolving credit facility for Arch coal.