proof that kingsnorth was infact shut down by protesters!

the water cooling inlet system of kingsnorth power station was shut down because of four protesters who conducted a peacefull sitdown protest above it. 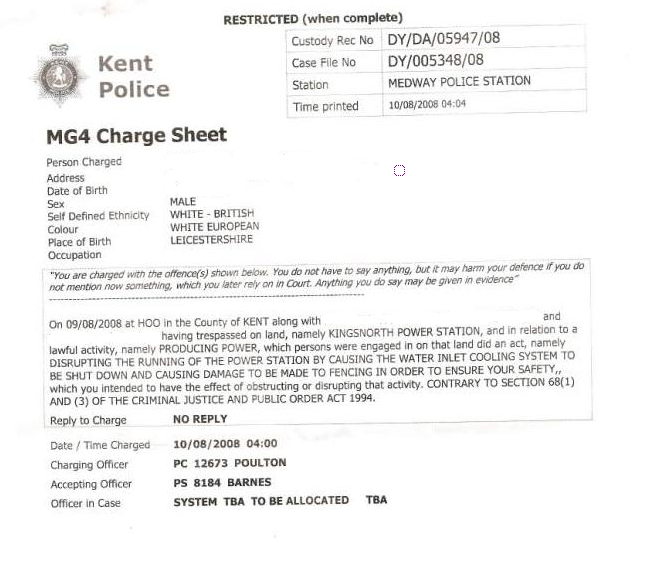 on saturday the 9th of august four activists using great skill and dexterity managed to gain access to the water inlet area of kingsnorth powerstation and sat on a ledge above the water.

while the protesters sat calmly getting to know one another and making phone calls to the local press the riot police behind the razor wired fence began to cut holes using bolt croppers to allow climbing specialists rigged with all their equipment to come from either side surrounding the protesters. the police removed a large sign from behind and another hole was cut in order to allow the police to pull the peaceful protesters through to the other side of the fence where barking dogs and riot police awaited. all four protesters remained calm and decided to link arms with one another. as the police struggled to pull them free they held on tightly and managed to remain there whilst more police joined in the task of removing the peaceful static protesters using all the force and tactics they could. eventually after much effort from the police one by one the protesters were removed, after being handcuffed and searched (again) they were put in to the back of a police van this was the first of many as they went through at least three different vehicle on the way to the station. three of the protesters were released later on that night and the forth was charged in the early hours of sunday morning where she then found out that unbeknown to her e'on had instructed "the water inlet cooling system to be shut down" (see charge sheet) thus causing major disruption to the entire running of the plant. the forth activist was remanded and after attending court on the monday morning she was granted bail.

well done to everyone that took part weather in the action itself (green, blue, silver and orange groups) or in climate camp in general (food, workshops, setting up and securing the camp) your input has been greatly appreciated and this success would have not been possible without you, thankyou.