A Personal Experience at Climate Camp with photos

A brief and subjective report of my time at Climate Camp with photos. 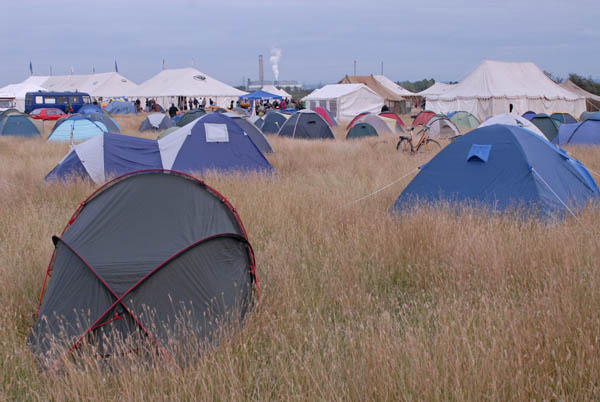 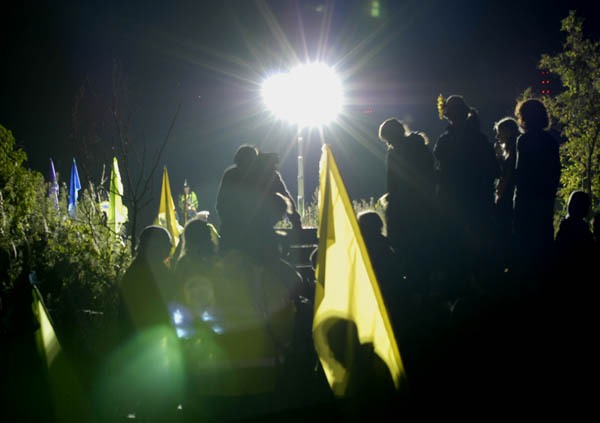 entrance to camp gaurded by campers 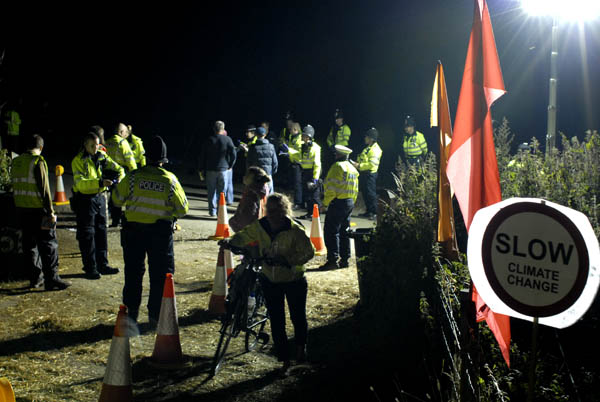 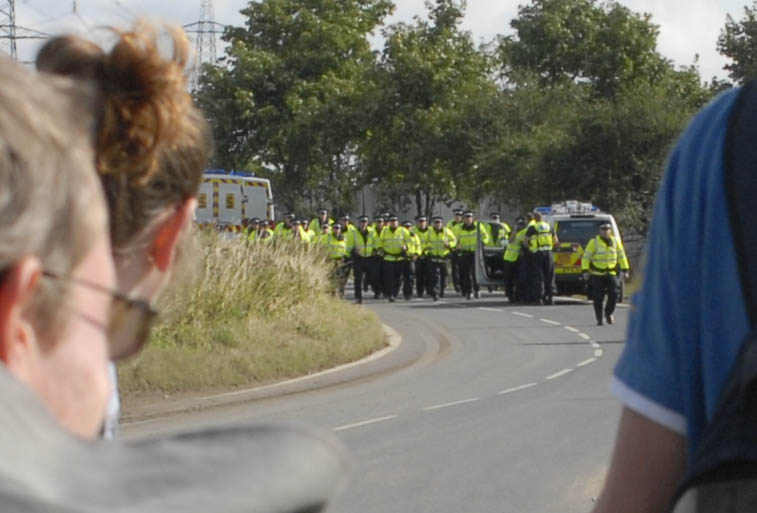 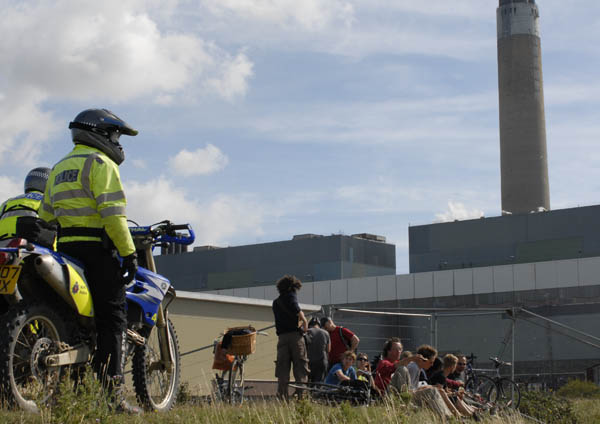 a picnic is legal isn't it? 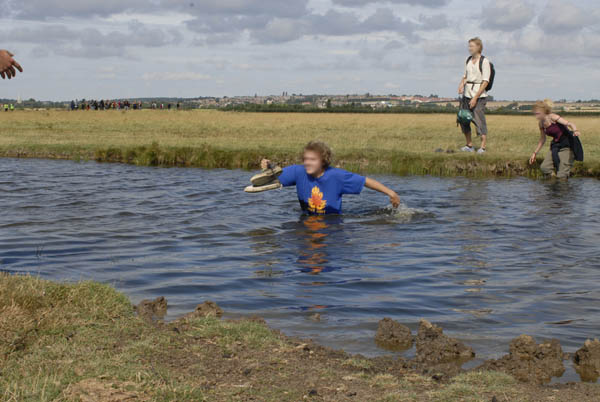 they came from all directions 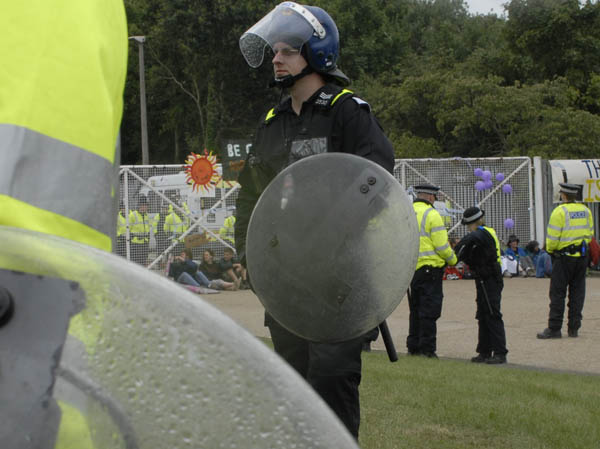 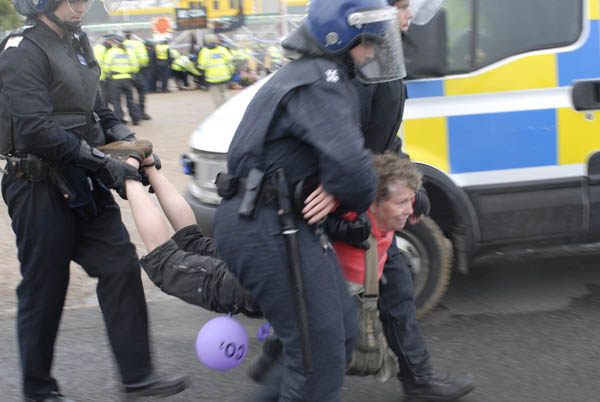 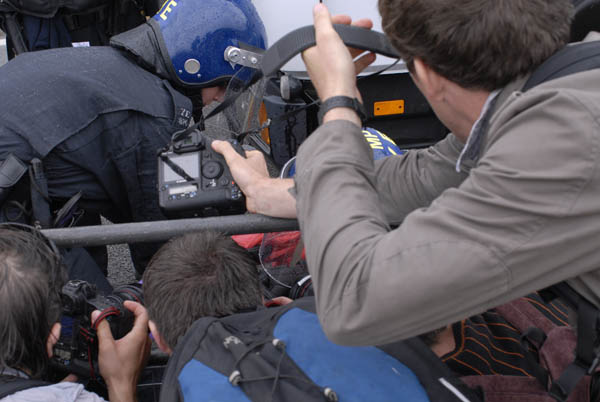 photographers jostle while handcuffs go on 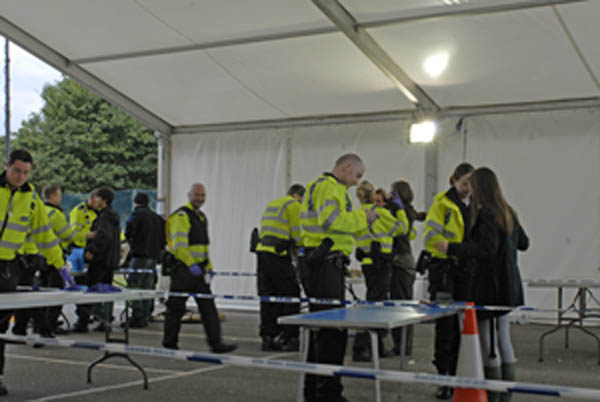 bonus photo of police search station where all campers were searched

after a bad night’s sleep with the police helicopter burning taxpayers money overhead for what seemed a large part of the night, I went off on a bike borrowed from the Climate Camp’s utopian “bike library”. There were around 12 of us, all on bikes. There were some vague plans but basically we were just going out to protest and see what happened. A rather optimistic statement had been made that the Kingsnorth Power Station was to be shut down by activists, and we were supposed to be activists. But I was not feeling at all positive, and was wondering what the hell it was all for, what the hell I was doing there, and would this really change anything when our political masters seem so removed from reality, etc.

Some very competent navigation by members of our group led us down little lanes and footpaths, across the Kent countryside. Stopping only to read the map and debate strategy and route, to nibble blackberries, and hold an interview with a Guardian journalist, who leaped out of taxi, eventually we came to an entrance of the Kingsnorth Power station where a rather surprised group of police started shouting in call and return a sort of Neolithic war chant consisting of deep grunting noises. Keep banging the rocks together guys. They frightened the hell out of me, I was in such a hurry to get back on my bike I managed to knee the frame and did a sort of limping cycle away with the others who seemed a lot less freaked out than me. We continued round the perimeter fence of the power station ignoring a farmer’s notice, which mentioned something about a bull in a field.

We came to a great spot where the perimeter fence of the power station met the coastline. A good spot for a picnic we thought, and surely picnicking here would not be illegal. Considering we were in the midst of what was probably the most policed area in the country it appeared that we had found a chink in the authorities defence of the power station, there was not a police officer in sight. I think most of us felt pretty good about that, but within a few minutes a couple of officers on scramble motorbikes sped along the sea wall. I guess we could have made an effort to climb the perimeter fence but first there was a temporary fence they had erected for the day then another fence with nasty pointy bits on top and then behind that was the electric fence. No one had brought their pole vault. So we just had our picnic by this time being watched by a couple of police women on horses

Hundreds of protesters seemed to be coming at the power station from all directions some were wading through water others on foot in the fields. From the shore we could see others in rubber boats who made landfall right opposite the power station but were soon taken away in police boats.

After picnicking we continued cycling round the power station when we met a couple of local lads who told us about a back way into the power station which we also tried. It appeared the police had eventually figured that out too so we legged it then biked it out of there.

Arriving at the scene of the rally late I found most people had left, but a bunch of around 24 protesters were left behind and had decided to do a sit down protest right up against the fence of the power station main entrance.

In defence of the environment they sat against the fence, and despite being told they were committing an offence by officers of the law they sat and refused to move. The officers repeatedly told them of their offence but believing they were acting in defence of a greater crime they continued their environmental defence fence offence. But in defence of the state, and because they are paid to do what they are told, some big strong policemen in body armour and helmets eventually had the humiliation of carrying a grandmother, and others to waiting vans. The grandmother said, to the photographers, who were jostling each other for the best shot of the granny being handcuffed and bundled into the van, “I am doing this for my grandchildren, I feel very strongly about this”. Grandmother I salute you, but Russia had been bombing the lovely country of Georgia and though the photographers jostled each other you were knocked off the front page and there instead was a photograph of another Grandmother in the midst of the flames and destruction of war.

At the end of the day my mood of helplessness and negativity had lifted. I had met some very high quality people, intelligent, considerate and trustworthy types. I had some interesting conversations on a variety of subjects. For example having an attention to detail deficit, which leaves huge holes in my knowledge on many subjects, I learnt from a Manchester teacher the details and extent to which the unions in Britain have been disempowered by various Acts of Parliament.

Despite being surrounded by though looking cops dressed in black and looking like something out of Blade Runner a community had been created inside the Camp, one in which an accepting and cosy atmosphere rained. I felt good about having contributed in a small way to something, something that felt right. I had helped do the washing up in a Climate Camp Kitchen and had played a tiny role in something that feels like a social movement. Something that is hopefully the beginning of something that might help re-democratise, and bring some consensus in decision making to our society.

On leaving the Camp and hitching back to the station a man with a middle eastern accent, wearing a stripy apron, and looking as though he may have just stopped work in his fast food shop, stopped to give us a lift. When we arrived at the station and a gang of around 10 of us scruffy field dwellers fell out of his van I was just about to offer him my profuse thanks when I realised he was thanking us. He told us we were an inspiration and he really meant it. My eyes moistened as I thanked him for the lift and walked away.

Request for witnesses and photo/video evidence

You'll see this comment elsewhere on indymedia. It is a request that people who witnessed or took photos or videos of arrests, assaults or searches etc. please contact