The Hoo Peninsular becomes a fully functioning police state but police fail miserably!
Where can we start. Having just come back from climate camp tired but VERY happy and so impressed by our fellow activists whose dignity, good humour and super human restraint meant that NETCU and those who they “advise” (ie the 27 different police forces present, the home office and probably Eon too) failed to invade the camp and even failed to stop Eon’s fences being breached! Please log on to Indymedia with their excellent reports of the week.

First of all a riot cop left behind the NETCU handbook which as regular visitors to this site will know has been sought for many years now. Some have said that because it is just “legal advice” that this is hardly a revelation, we respond by saying that we now have NETCUs fax number, phone number and email address. Beforehand we only had their PO box in Huntingdon Cambridgeshire. Now we have a Huntingdon telephone code we can very strongly assume that Superintendent Pearl and his minions are holed up in Hinchingbrooke Park at Cambridgeshire police HQ which might be a good place to demonstrate against unprovoked police violence against activists. The threat to charge children and batter them with batons issued from a low flying helicopter on the orange march springs to mind as does riot police charging lines of us whilst we simply held our ground not retaliating at all to the pepper gas or batons.

The handbook has also been thought to be very important since it featured heavily in arrests at Sequani in 2006. Four arrests were found to be unlawful by West Mercia professional standards, £25,000 in compensation was awarded to activists and we quote their findings after their investigation:

“The force legal department advised that the elements of section 42 and 50 are not made out, as there is no antisocial behaviour displayed by the protesters when the police arrived. Ms S’s actions in requesting officer details and taking pictures on her mobile phone of the officers are not deemed to be anti social. In addition there is no evidence to support any residents suffering from harassment alarm or distress on that date and so section 42 does not apply. The arrest is therefore unlawful and any actions taken thereafter are also deemed to be unlawful.

All aspects of the complaint are substantiated.

It is clear from the investigation that officers have been provided with a briefing note, which interprets the use of legislation in an ambiguous way. This has led to officers becoming confused when faced with protesters about how to enforce their powers”.

Despite asking the police in West Mercia professional standards, on bended knee in fact, for the “briefing note” we were politely refused.

Briefing note, handbook, whatever NETCU have encouraged their fellow officers to use powers they do not have. For those who still do not understand this handbook in our hands now enables our lawyers to go through it with a fine tooth comb to find any ambiguities which can then be used against the police in both criminal and civil courts. The Chief Constable of Kent police may find his financial problems are just beginning when the complaints start and claims for financial compensation from hundreds of activists pour in. Julie Spence Chief Constable of Cambridgeshire Police and Steve Pearl’s boss may also find that she is requesting more funds. NETCU may well prove to be more trouble than they are worth, they may also rewrite the document, change contact details and redistribute which will disrupt their activities and cost them some more money. There is also the embarrassment factor to account for.

We urge any activist(no matter what demonstration/action they were arrested for) facing court to make sure that their lawyer has a copy of this booklet as the information therein may have been used as a basis for arrest, that information might be incorrect. Activists who have had cases dropped may find that an arrest made using the handbook was unlawful, they might find it helpful in suing the police.

Complaints can be made about NETCU if made against Superintendent Pearl who leads the unit. Bear in mind NETCU have sought to imprison every last animal rights activist who does more than write a polite letter to the paper/ MP. They specifically want to disrupt every demonstration, stall, the handing out of leaflets and tend to gloat every time they succeed. Animal rights people have also been to the Royal Courts of Justice to find Steve Pearl(head of NETCU) sitting behind Timothy Lawson-Cruttenden (employed by HLS and a whole host of others) actually advising various corporations about activists seeking to seize assets and curb all protest. He has given many statements which exclude vital information for example in 2000 he gave evidence that the A1 was blocked by anti vivisection activists on tripods and that a car was scratched he omitted the fact that a serving police officer nearly killed a protester by pulling a tripod over (causing severe facial injuries, blood loss and fractures to the left leg) and even said that he was not aware that anyone was injured when he was questioned by Cambridgeshire professional Standards. He had sat in the same room as that activist at the Girton planning enquiry when the same activist gave evidence about her injuries and police violence a few years prior to him writing this statement.

In all NETCU are at the front-line in making ALL activists into long term prisoners with all assets taken by the state or corporations with whom they work closely. They must be challenged and do not think for a second that if you only do “legal” things they are not interested, if you are effective they want you and badly. Yes we know that Steve Pearl and some of the FIT teams may appear very endearing but we stress that their job is to destroy any criticism of vivisection for now and it would appear climate change in the near future. Eternal vigilance, play nicely with the police, be polite, share a joke, swap badges (one of us got a very nice Sussex police sticker by the way) and never be violent towards them (unless you really do have defend yourself/others against serious injury/death) but also never forget that they are our enemy and want information about every one of us right down to the last babe in arms to be fed back to NETCU who will then use that information in any way possible to fuck up people’s lives work, family, friends every single aspect.

NETCU have also lied they said that Eon was not disrupted during the protest and so why oh why have Kent police charged 4 people with aggravated trespass accusing them of causing the river flow in to the plant to be stopped by Eon because of their position on the ledge above the water inlet? Maybe the more technically minded can help us here but how does a power station run without a cooling system? Are Kent police lying or misled by Eon? We suppose time will tell.

As for the local people, many had to endure being harassed, assaulted and bullied by police when they walked their dogs, went jogging or to the shops. Many of us are used to being pushed around by police and we expect it as activists although we tend to know our rights, stick together and fight back through the courts. What is truly frightening is how everyone in a certain area had to justify their normal activities to the state it was although martial law had been declared and an army of occupation had marched in. As was the case at the animal rights gathering some locals were targeted possibly to turn them against activists. The tax payer even had to pay for visiting police officers from as far afield as Wales and Scotland to enjoy themselves at a local Holiday Inn complete with swimming pool and gym as well as lots of police toys for example big lights, night vision, loud speakers (great for playing pranks with) and lots and lots or Metropolitan police stickers which adorned everything. Of course police sirens were a constant source of amusement as was donning riot gear and standing in the woods. Some officers even found that unripe pears made good missiles against a small group of teenagers, needless to say if the police had been pelted with fruit they might just have arrested their assailant.

Climate Camp was an astonishing success in the face of sometimes quite brutal suppression but nothing daunted the spirits of activists. One of the funniest things heard by us was when after a night of police sirens, low flying helicopters and police in riot gear making various appearances an activist loudly asked riot cops where their snooze button was. It appears they don’t have one still neither do we.

Pictures from the weekend 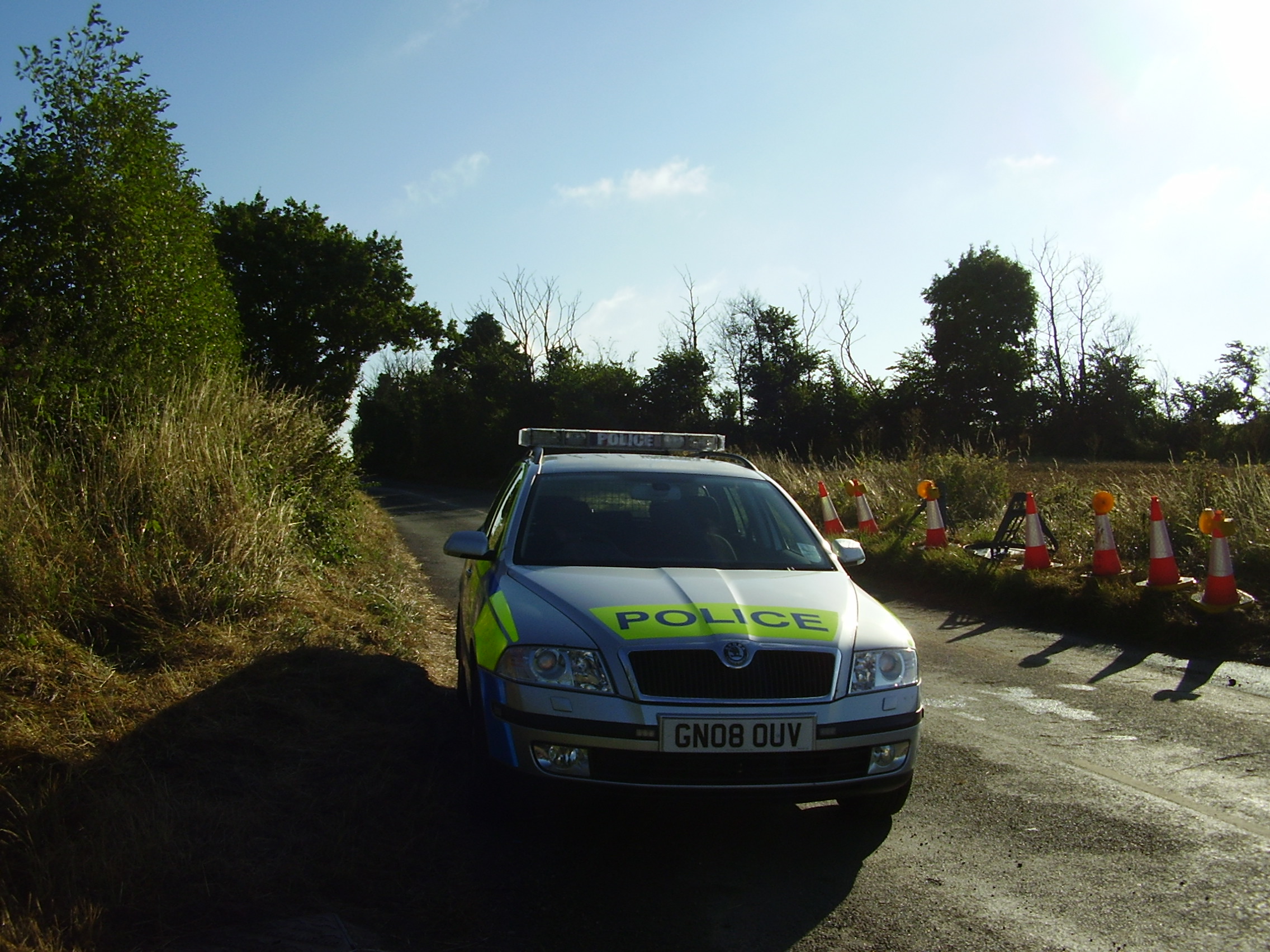 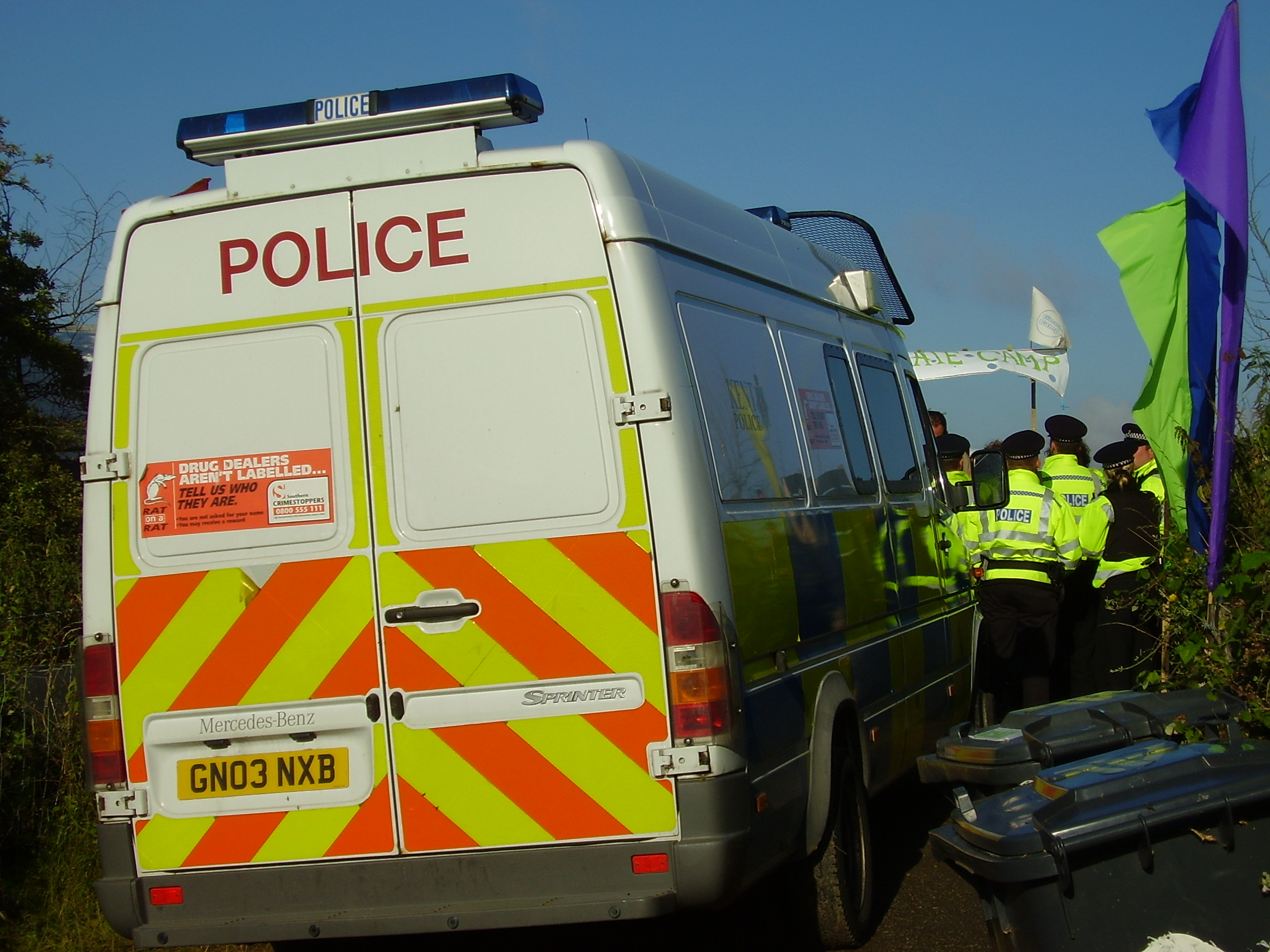 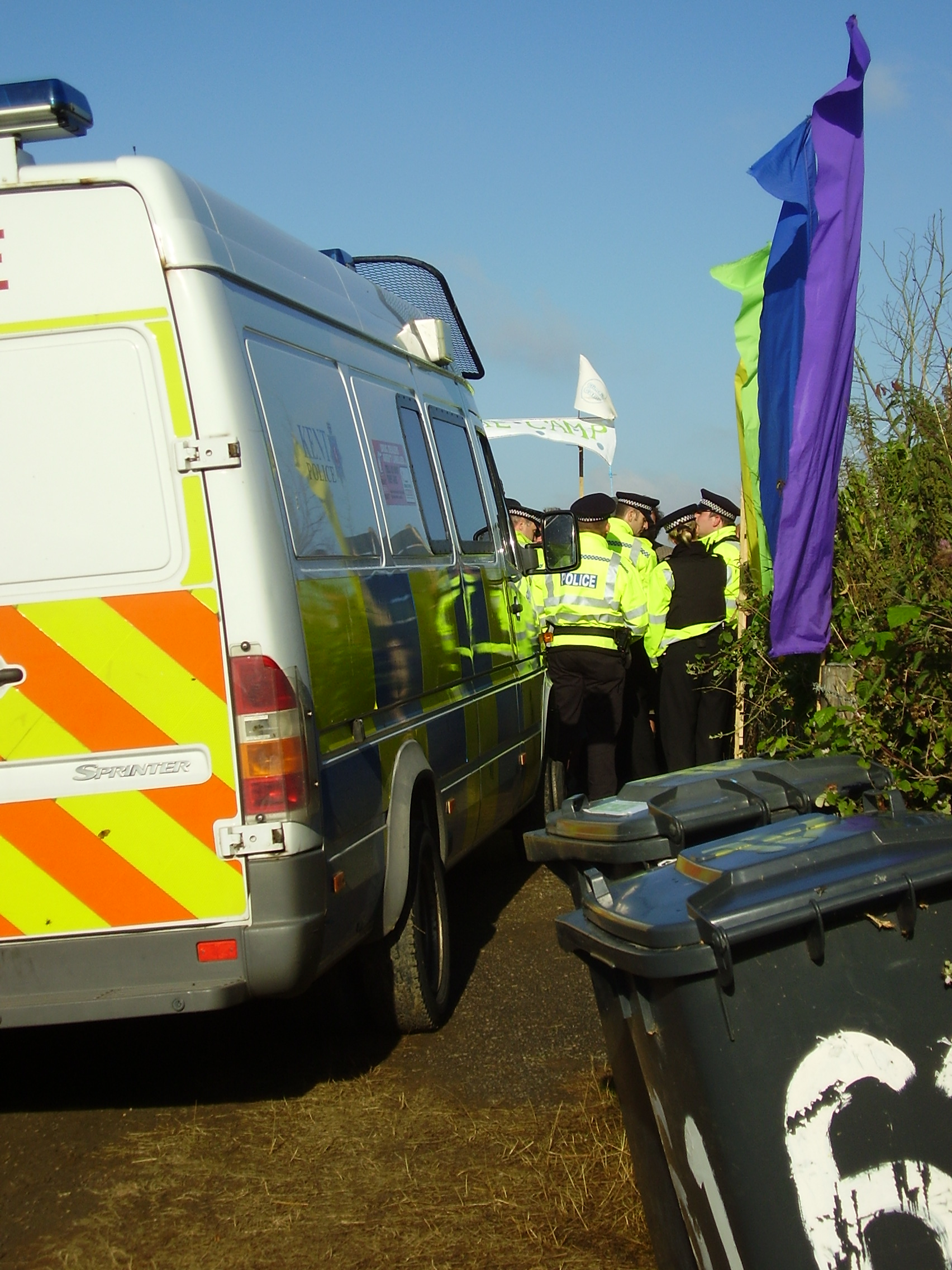 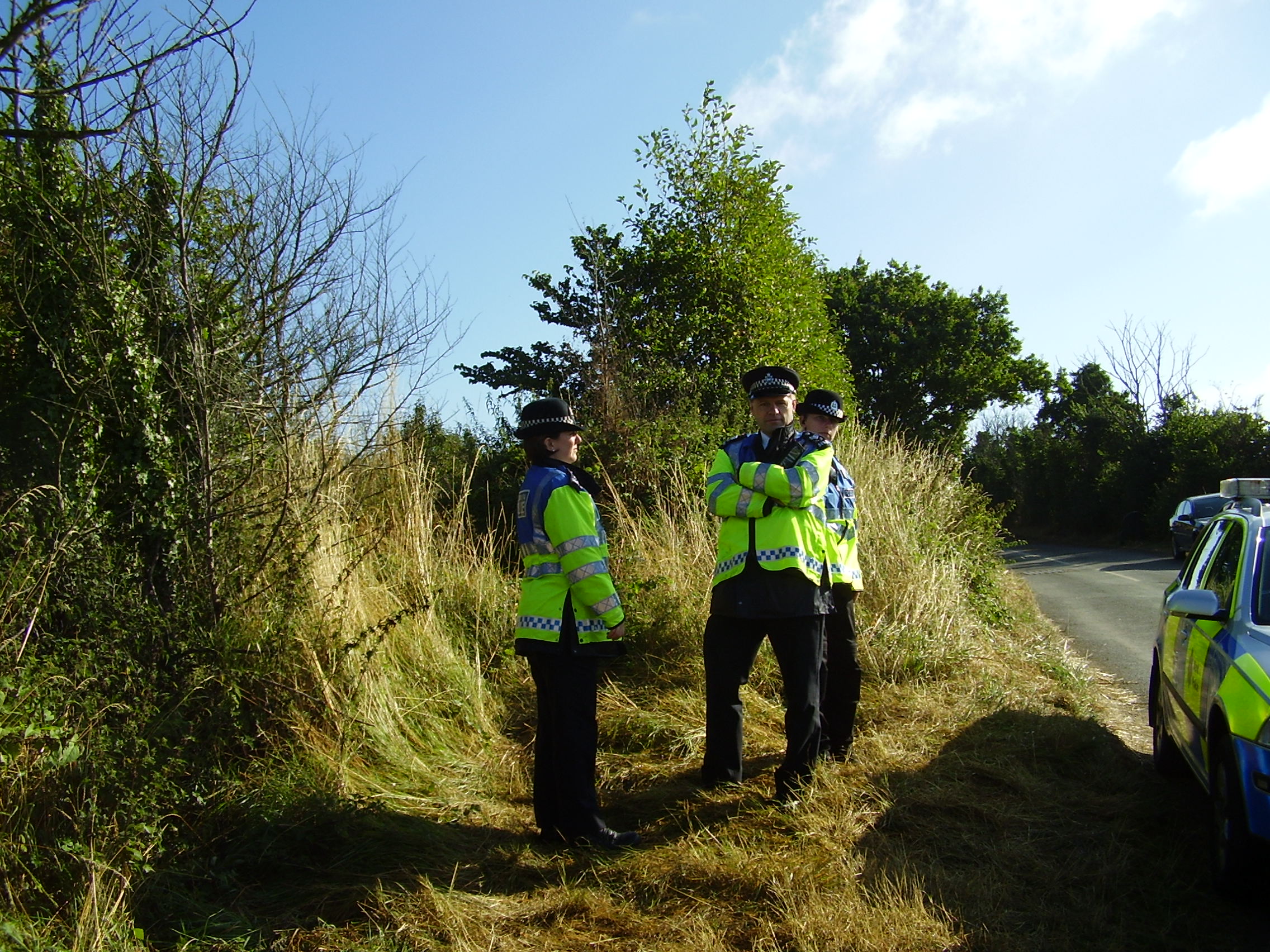 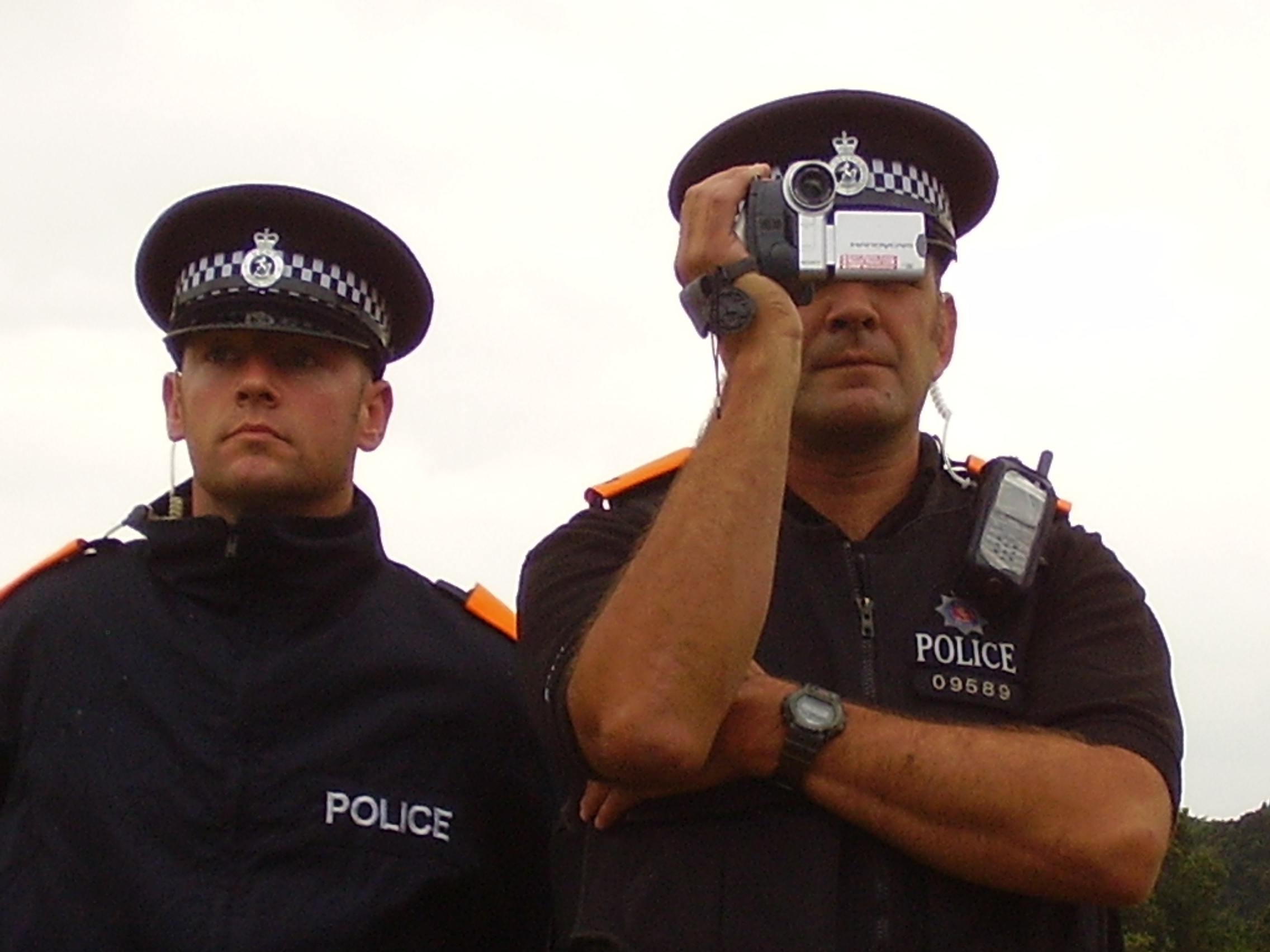 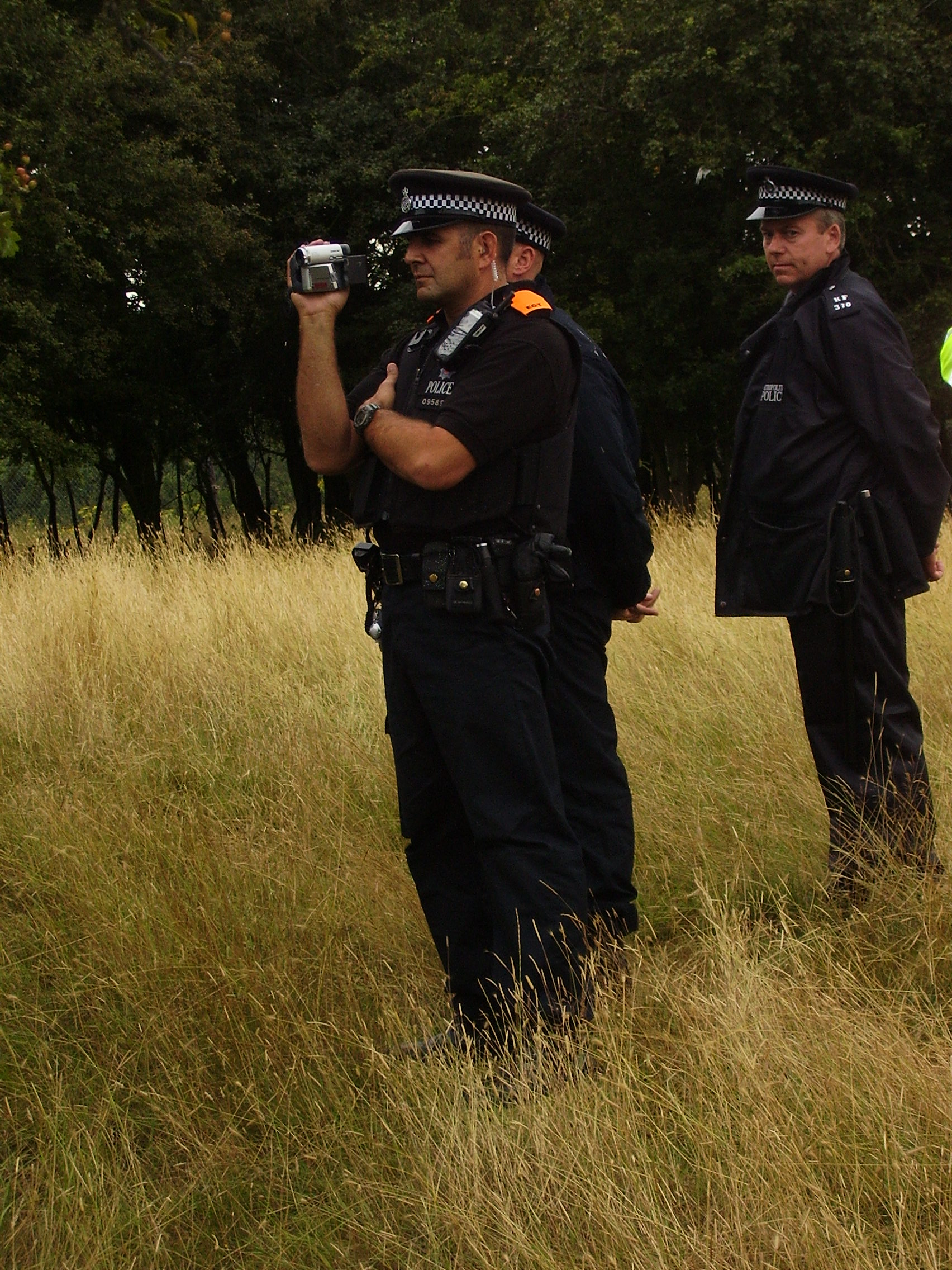