Two fitwatchers were kept in custody for five days after taking photographs of the police at the front gate of the camp.
Three fitwatchers arrived at Climate Camp late morning on Friday. After going through the inital stop and searches with gritted teeth, they pitched their tents, had a cup of tea, and decided to take some photographs of the repressive policing operation at the front gate.

Within five minutes, they were wrestled to the ground and arrested on charges of obstruct police and assault police. At court the following morning, one activist was released on the condition he went straight home without picking up his tent. Two women were remanded in custody until Tuesday, "as the police were very anxious they would go back to camp", believing they would "breach any bail conditions", and "create a situation" whereby people would be "placed in fear of physical and mental injury". This was despite one woman having only been accused of the very minor charge of obstruct police.

Later that morning, in a non protesting related incident, a man who had breached his bail conditions from the previous week by getting nicked for fighting, was granted bail. Even the SERCO guards couldn't work out what was happening, and were very sympathetic.

Eventually, the women were released from HMP Brozefield late Tuesday afternoon, after having been granted unconditonal bail.

However, Fitwatch is not about a few people. It is about an attitude, a tactic - a tactic which has been very much in evidence throughout Climate Camp week. People photographed and documeted the FIT, tried to block their cameras, and gave a robust response when they tried to enter the camp. The two Fitwatchers they remanded were at home, hundreds of miles away, when these things happened.

Imprisoning two people will not alter this shift in attitude towards the FIT. It is becoming part of activist culture to challenge rather than ignore. And there is no doubting their job is getting harder (and out of interest did anyone spot PC Pritchard MD862 at Climate Camp? Or is it bye bye Wes!?)

It is amazing and inspiring to see the number of people who were still able and willing to take direct action following a week of unprecedented repression. Even people used to repressive policing found it intimidating, and it is great that people stood their ground and went out to stop the power plant.

However, we have to tackle this repression. We have to build effective strategies so we do not allow ourselves to queue up to be searched, where we don't allow the police the opportunity to build databases of every person who attends a protest.

Locking up a couple of fitwatchers for a few days only strengthens their ability and resolve to fight back. Systematically and violenting repressing hundreds of people will have a similar result. There will be a backlash. We will all fight back.

Before the cops left Steve Discombe from the FAT, sorry, FIT was about. I seen him being followed by a group of people calling out his name (or variations on DaScum or DieScum) and making remarks about his large shinny truncheon. He looked pretty troubled and left quickly. He tried to say that Steve wasn't his name, but thats just not true is it?

All power to the FitWatchers! 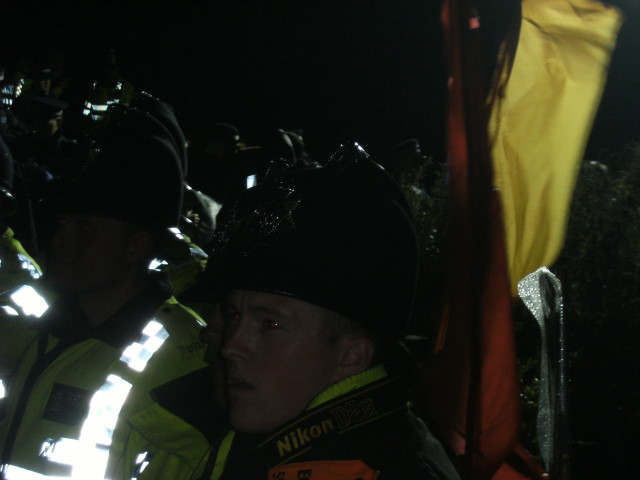 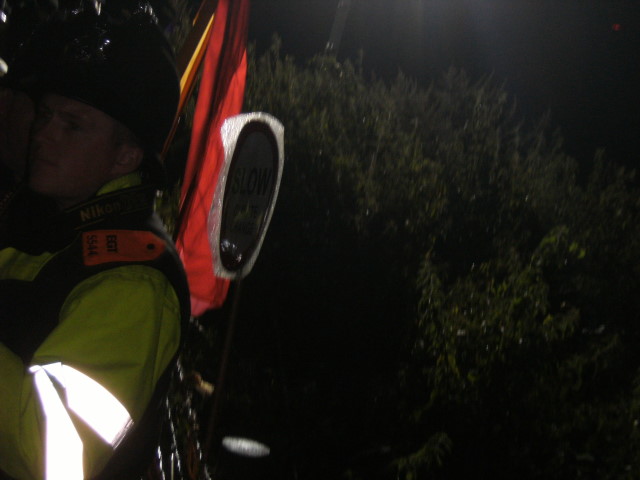 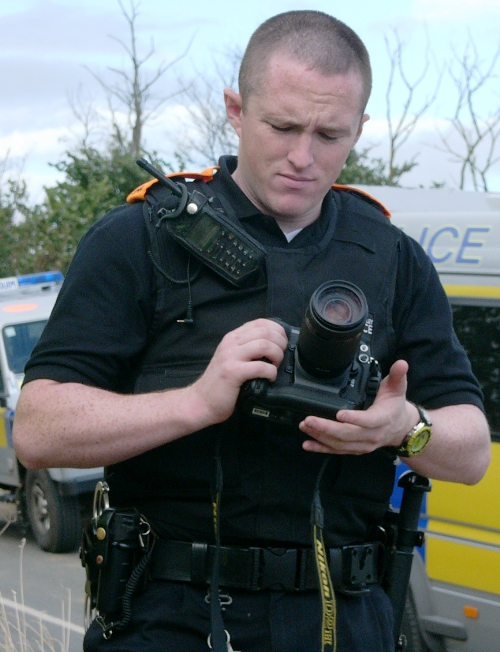 Here's one of him in daylight.