Here we are again, on the run-up to another Red, White and Blue disaster, with the BNP in disarray and Nick Griffin's leadership looking at its rockiest since the heady days of December 2007, when Sadie Graham and co were booted unceremoniously out of the party amid allegations of email-tampering and back-stabbing that led (eventually) to Manchester Civil Court, though not to any kind of resolution. 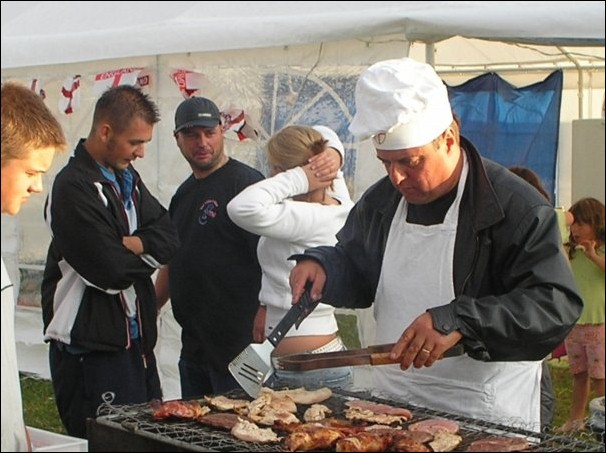 Following the December rebellion, when dozens of party activists stood down in support of the Graham clique, there were plans to get rid of Griffin flying about all over the place - talks of a new party, leadership challenges, legal challenges etc - all of which came to naught as the rebels failed to provide the leadership that the rebels and their supporters so desperately needed. Instead, Colin Auty, little known inside the party except for his 'music', pushed incessantly by the failing Great White Records, was persuaded to stand in a pointless leadership campaign, doomed to failure even if it had managed to get off the ground - which it didn't.

This utterly pointless challenge by Auty has inevitably brought Griffin's paranoia to a head and has led directly to his much-publicised attempt to twist the rules of the party to stop leadership challenges being annual and make them quadrennial or at the very least, biennial, thus cutting down on his chances of losing his lucrative post with its almost endless potential for money-making scams at the expense of a gullible membership. The RWB will see an Extraordinary General Meeting take place which will change the face of the BNP and consolidate Griffin's position until he can (as he fully expects to) join the gravy-train of the European Parliament next year without having to worry about distractions like Colin Auty popping up out of nowhere.

This EGM is a direct result of the failure of the Challenge for Leadership rebel team to provide proper leadership when it was most needed, whether inside the party or out. Sadie Graham was extremely well-placed to form a new party immediately following her sacking, to stand against the corruption and financial mismanagement that is endemic in Griffin's BNP but she and her team chose, for some incomprehensible reason that eluded most of her supporters, to continue to give her direct support to the existing BNP - though a BNP without the likes of Griffin, the notoriously-arrogant Mark Collett and bumbling idiot Dave Hannam, both of the latter being much-loathed even within the party itself.

Graham's partner Matt Single, former member of the BNP's security team and an unwitting stooge in another of Griffin's scams (this time to teach people evasive and defensive driving just in case someone attempts to kidnap them - for a fee, naturally), who writes as 'Integrity' on the rebel's Challenge for Leadership blog, has taken centre-stage in the fight against Griffin, banging on incessantly and impotently about how bad he is at running the BNP and how corrupt he is - but this appears to be anger that's still simmering away at the treatment he and Graham received from his former comrades in the security team, who raided the Single/Graham home with the willing help, it has emerged, of Nina Brown - a former friend who had been angling to step into Graham's job, or something similar, for some time. With friends like that, who the hell needs enemies.

Yes, folks, there is NO loyalty to one's friends in the BNP. All this rubbish about the party being one big happy family or like a community is, as you suspected, bullshit pumped out by the ton via the speeches and publications with which the BNP relentlessly showers its membership.

You may recall that the story that did the rounds following the raid was that Griffin's henchmen (Martin Reynolds, who we hear is for the chop next, and his fellow Kray brothers, sorry, security team members) were outside the Graham home, having gone there to reclaim items that were actually owned by the BNP (or so they claimed). Much to their surprise, ho-ho, neither Graham nor Single were at home. While pondering what to do, who should appear but Nina Brown, a then friend of the couple and handy keyholder for when they were away and the cat needed to be fed, who let the security gorillas in to take the goodies.

The truth has now begun to emerge and it turns out to be quite different. In fact, the whole event was stage-managed by Nick Griffin with the collusion of Nina Brown and Reynolds' security team. It was known that Graham and Single were off to attend the South East Christmas social (along with Griffin himself) that weekend - they all knew that - so Reynolds and a team made up of heavies from Leeds and Birmingham met up on the motorway, travelled to Brinsley and arranged to meet with Nina Brown who opened the front door for them and watched as they took the PC (which didn't belong to the BNP), the laptop, a mass of paperwork, printers and so on, piled it into the vehicle and shoved off. And why the need to do all this surreptitiously? Because Single is a thug and if he'd been on the premises, particularly with a pregnant Sadie Graham getting all hot and bothered over what was happening, he'd have caused something of a ruckus which might have done the party even more damage in the long run.

Nick Griffin has no sense of loyalty, even to those who devote themselves to him and/or the party. For years, Graham and Single helped Griffin to hold his position at the top of the BNP and did nothing except remain loyal to him while others were purged, expelled or forced to resign. Then it was their turn and they went the same way. Martin Reynolds has followed Griffin around for years, waddling beside him like an overweight but faithful dog, ready to plod into action should one of his many enemies take a baseball bat to Griffin. And now we hear that Reynolds is on his way out. Nina Brown, who has already earned herself a reputation as an utterly useless parish councillor, is also rumoured to be out of favour and on her way out of the party. And thus is loyalty rewarded in Nick Griffin's BNP.

Even worse is to come. We hear from reliable sources that the EGM is rigged to produce the result that Griffin wants (no great surprise there), postal voting is now allowed, despite (or perhaps because of) the BNP's repeated claim that postal vote fraud is both easy and common, and that those who vote against Griffin's proposals will soon find themselves out on their communal ear.

So no change there then.