Arab Media Watch condemns the Israeli military's decision to take no action against a tank crew that killed Reuters cameraman Fadel Shana and wounded soundman Wafa Abu Mizyed in Gaza in April 2008. AMW joins the International Federation of Journalists, the Committee to Protect Journalists and other media watchdogs in calling for a full, independent inquiry.

AMW expresses concern that the investigation's decision has been almost completely ignored by the mainstream British press, the sole exception being Guardian correspondent Rory McCarthy. This is surprising given its life-threatening implications for all journalists reporting from the occupied Palestinian territories. 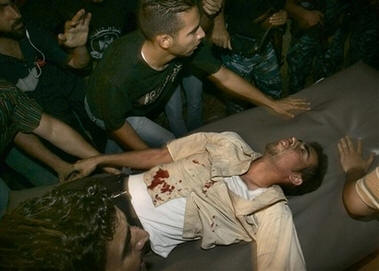 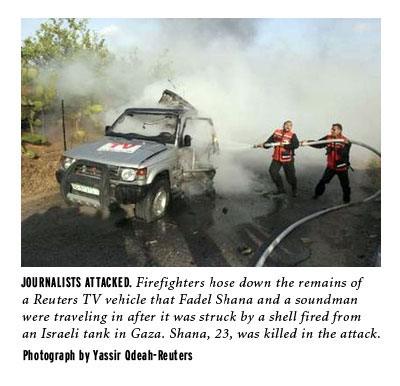 AMW rejects outright the Israeli military claim that the tank crew was justified in its actions because the blue flack jackets worn by Shana and Abu Mizyed are "common to Palestinian terrorists." The jackets were clearly marked 'PRESS,' and are identical to those worn by journalists covering conflicts worldwide. Their car was also marked with the words 'PRESS' and 'TV' in large coloured letters. This discredits the claim that the tank crew was unable to ascertain clear identification.

Furthermore, there was no fighting taking place in the immediate area at the time, according to eyewitnesses interviewed by Human Rights Watch, which conducted a detailed investigation in April and found evidence suggesting that the tank crew "actually targeted the journalists."

"The Israeli investigation is a dangerous whitewash, effectively giving the military a green light to target any journalists who are clearly marked and simply doing their job in already difficult conditions," said AMW chairman Sharif Hikmat Nashashibi.

"This is deplorable and indefensible. Worse still, it is not an isolated case," added Nashashibi. "The investigation's findings give credence to the notion that a culture of impunity is increasingly ingrained in the Israeli Defence Forces, not just regarding its treatment of Palestinian civilians, but also journalists. As such, the British media's almost total silence on this grave injustice is a saddening mystery."

UN Security Council resolution 1738 (2006) condemns attacks against journalists in conflict situations, and calls for proper investigations. It states that those working in areas of armed conflict are civilians, and directly targeting them constitutes a war crime. The text of the resolution is at:

AMW extends its condolences and support to Reuters and Shana's family, and urges the British media to make its voice heard.

In their own words:

"I'm extremely disappointed that this report condones a disproportionate use of deadly force in a situation the army itself admitted had not been analysed clearly. They would appear to take the view that any raising of a camera into position could garner a deadly response." - David Schlesinger, editor-in-chief of Reuters

"The IDF's decision to close its probe without taking any disciplinary action is the latest in a long line of cases clearing its soldiers of deadly negligence. The FPA believes the army is obligated to clearly identify its targets before firing, especially in areas where civilians and journalists are present." - Foreign Press Association

"We are deeply dismayed by these findings. We are calling for an independent government investigation to review the death of Fadel Shana. The exoneration of the Israeli soldiers involved in this incident sends a message to journalists in the Gaza Strip that they can come under fire any time they raise a camera. The IDF has a responsibility to work with journalists and media groups to develop systems that would allow journalists in the Gaza Strip to operate with relative safety and security." - Joel Campagna, Middle East senior programme coordinator for the Committee to Protect Journalists

"This inquiry, which has been farcical in its nature, is likely to make life even more dangerous for journalists working in the field. We have no confidence in an inquiry that has been used by the Israeli Army to avoid facing up to the consequences of its irresponsible actions. We share Reuters' concern that there has been a terrible injustice here and that the Israeli authorities have failed to take action. This report is untenable because it does not meet any test of what is necessary for a legitimate independent inquiry into these tragic killings. As usual we have an army investigating itself without proper independent review." - Aidan White, general secretary of the International Federation of Journalists