Cameron visited the Wirral yesterdayfor a Q&A session and "faced a dozen protesters opposing (hunting) reintroduction on the way in, and one fierce questioner on the issue within the hall." - Liverpool Daily Post 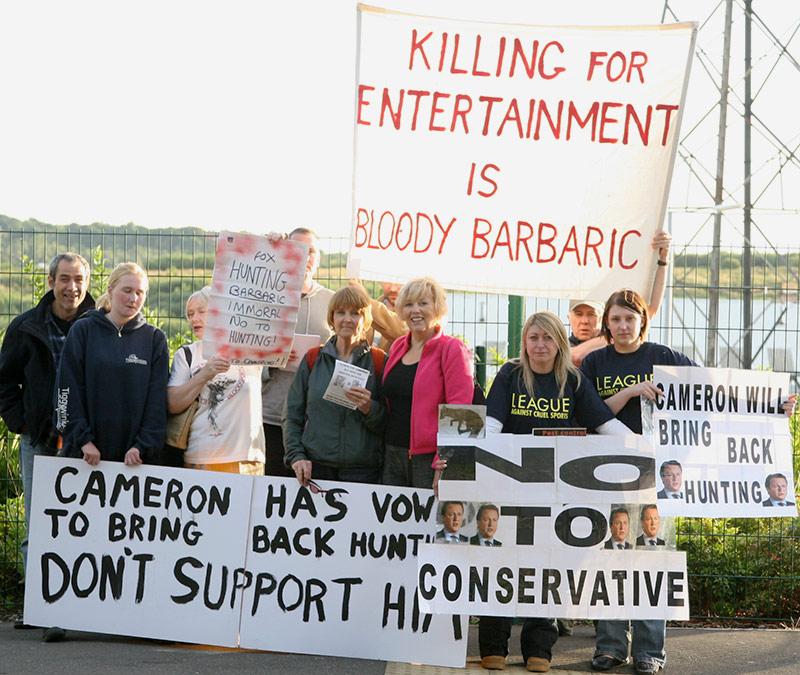 Animal Right's protesters were very direct when David Cameron came to Wirral yesterday.on his 'Cameron Direct' tour, He is touring the North of England in his plight for the northern vote A number of protesters, both local and from the wider area showed up to show their displeasure at Cameron's unethical pastime. Cameron has stated that 'there is nothing in his life so exciting to him than chasing wild animals and killing them' and has pledged to his hunting pals that he will repeal the hunting act should he gain power. 76% of the British public are against fox hunting because of the immense suffering caused to the animals in the name of sport. David Cameron plans to go against public opinion and allow these violent thugs to go back to their brutal pastimes. One of the protesters was inside the venue and actually was able to pose a question to Cameron about this unethical fun of his, much to his embarrassment, at the end she then walked throughout the hall with an anti hunt banner and wearing an anti blood sports T shirt. The protesters are urging people not to vote for Cameron as a vote for him is a vote for animal abuse.

only we can stop hunting

Hunting is still going on as usual despite the ban - woefully enforced by the cops, who are still more interested in nicking and hassling sabs than dealing with illegal hunting. What this ban has shown us is that we can't rely on the political class for favours, or expect them to do our dirty work. The ONLY way to stop hunting is to get out in the fields and sab! The politicians and the rich are hand in hand and work for one another, so politicians will never seriously move to ban hunting. I would go so far as to say that lifting the ban might do us some favours, as it would put an end to the misaprehension that hunting doesn't go on anymore, and get a few more sabs back out in the fields! Discuss!

As the person who organised this protest I cannot agree that it would be better for the ban to be lifted. It is flawed in many ways and the police, as we know, do very little to enforce it, but when did they ever do anything that involves preventing animal abuse? They are always much more enthusiastic to prevent lawful protest than enforce the law and prosecute the abusers.
It is important we keep the ban but it should be strengthened and much more rigorously enforced. To lose it would give this sadistic pastime some credibility, It would play into the hands of the likes of Cameron and his cronies at the CA if this ban was repealed.

As one of the organisers of the event in Wirral, I was keen that anyone could attend, regardless of their political views, and ask David Cameron a question. That's the whole point. I am very pleased that one of the 'protestors' was able to ask a question. Again, that's the point.

He was very clear what his view is his and that others will disagree but the final decision will rest with MPs. Most people, when choosing their MP, do not do so on a single issue, no matter how important that issue is to others. I believe hunting is wrong and, as you say, most people agree BUT when it comes to voting, there will be other issues that take precedence for many people such as schools, cost of living and crime.

I have to say, I regret the Government didn't just introduce an outright ban on hunting animals back in 1997. Had they done so, I doubt if this would still be an issue.

Your protest was peaceful and reasonable - your members in the audience likewise and because of that, did not alienate many people who, no doubt, agree with you.

representation is not democracy

I think Cllr Lewis's comment demonstrates perfectly why representation, ie voting for someone every 4 or 5 years whose policies you only partially agree with and who might well break their election promises or deliver them half-heartedly once they get in, is not really democracy.....
that's why I'm an anarchist.


'Your protest was peaceful and reasonable - your members in the audience likewise and because of that, did not alienate many people who, no doubt, agree with you.
Cllr. Ian Lewis '


Yes Cllr Lewis, most people who protest are all of the above, despite being harrassed, moved on by the facist police who do not know the law themselves, sometimes put into jail for nothing more than organising a protest (Shuan Kettley)etc etc so do not be surprsied that these protestors were peaceful and behaved well, we are intelligent and educated people that is why we do what we do. It is the thugs like your hunt scum leader who do not know how to behave in a civilised manner