Energy cartels and the rise of the car - History of oil companies working together to control the energy market, how public transport has been dismantled and the energy and transport markets have been rigged in the UK and USA to force the population to be car dependent – Monday 3rd August 2008. 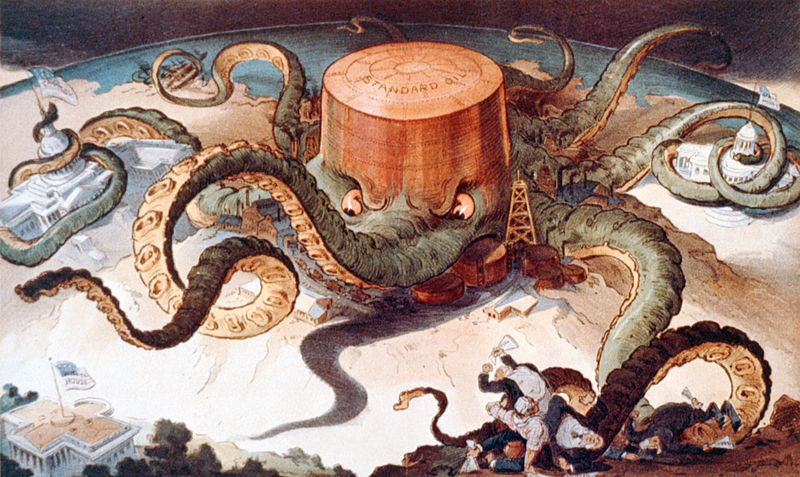 John D Rockefeller – ‘philanthropist’ and Standard Oil
The History of the Standard Oil Company - Ida M. Tarbell – 1904
“An oil producer was discovered stealing oil from the National Transit Company. He had tapped the main line and for at least two years had run a small but steady stream of Standard oil into his private tank. Finally the thieving pipe was discovered, and the owner of it, after acknowledging his guilt, was brought to trial. The jury gave a verdict of Not Guilty!”
Underhand tactics used to gain control of nearly 90% of all oil products in US by WW I, including bribery and secretly buying up railroads & transporting Standard oil almost for free and buying up competitors, using them to spy on real competitors
Broken up in into 34 companies (Exxon, Mobil, Chevron, Esso, ConocoPhillips and parts of BP & Shell) 1911 by Supreme Court – Sherman Antitrust Act. But J.D. Rockefeller retained shareholding and companies ‘worked together’.

1930 - Tram Closures in the UK
In the early 1930's the Royal Commission on Transport was investigating a number of major issues of transport policy.
Its third report, 'The Co-ordination and Development of Transport', (Chairman: Sir Arthur Griffith-Boscawen - Members: Marquess of Northampton, Earl of Clarendon etc.– over 50 witnesses) published in 1931 (HMSO, 1931), whilst acknowledging 'the great part played by tramways in the past' (para 365) and even some inherent advantages (less noise on well maintained track, absence of fumes, smoothness of acceleration and mechanical reliability: para 366), the Commissioners were generally unfavourably disposed towards trams. Concluded there must be no more.
Last line built in 1932 Eltham SE London – all gone by 1952 (Except Blackpool)

1936 - US Tram Closures - National City Lines
Between 1936 and 1950, National City Lines, a holding company sponsored and funded by GM, Firestone Tyre & Rubber company, Mack Truck, and Standard Oil of California, bought out more than 100 electric surface-traction systems in 45 cities (including New York, Philadelphia, St. Louis, Salt Lake City, Tulsa, and Los Angeles) to be dismantled and replaced with GM buses... In 1949 GM and its partners were convicted in U.S. district court in Chicago of criminal conspiracy in this matter and fined $5,000.