5th Sept: Global Day of Solidarity with the Austrian Ten

Please join the International Day of Solidarity and organize Demos in your City! Let's spread the word for the freedom of the 10 activists in Austria and demand an end to repression of social activism." 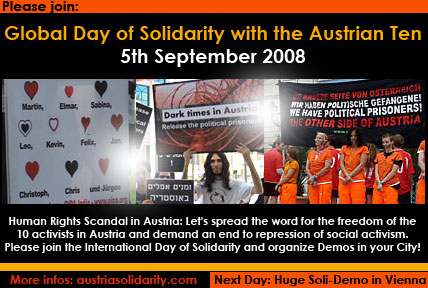 - First Detainee Set FREE, but Judge Manifests Again Coercive Detention ("Beugehaft") in Austria -
The case of DDr. Martin Balluch, who had repeatedly stated already that if released he would continue to be an animal rights advocate, was smashed in just under 10 minuted by the presiding judge, while Mr. Christian Moser - a married artist with 3 children, was set FREE!
"Christian Moser, the Judge believes, has suffered so much under the psychological stress of the detention and the separation from his family, that he will in future abstain to participate in animal rights activities", reported an observer. And this is what these ten cases apparently are all about: To break the detainees in their consciousness and to break their free will.

Since these two rulings now collude, the public prosecutor has immediately appealed against the release order of today and it is therefore feared that Mr. Moser could be brought back into prison in about two weeks time, if the Austrian government does not step in to put an end to these unbelievable atrocities.

Eminent persons of public life, politicians and scientists from around the globe and even celebrities like Mme. Brigitte Bardot have sent already urgent appeals to Justice Minister Berger and the Austrian government, which all so far have not been responded to with the only appropriate action, which is to set all detainees free and grant them a fair and public trial.
more here: http://www. wikileaks. org/wiki/Category:Whistleblowers/Austria

tell her what do you think about that!

Join an event - all infos will be posted here:

All infos about the case, resources (leaflets, banners, photos) and past demos: