32 people including workers & some of the most notoriously sanitised & perfidiously evil warped stereotypes to have been implanted in the 20th century child's imagination were arrested in California on Friday "on a misdemeanor count of failure to obey a police officer and two traffic infractions." As we know Aladdin is a thief & it is no surprise LAPD finally cuffed him. But the others?

Ostensibly they had been taking part in continuing trade union action against Disneyland for contracted work, health benefits and so on - so forth. 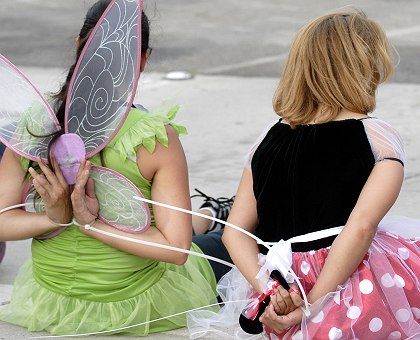 thankfully Disney has no Black heroes so the LAPD were merciful 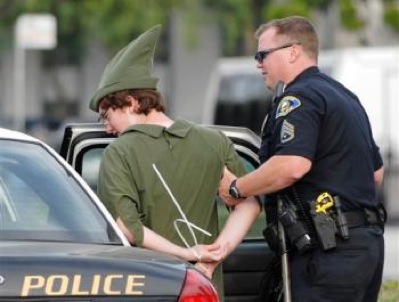 grow up and get a job.

There is no such thing as the average family, but if we believe that 2 hetrosexual adults with perfect teeth can spawn prepubescent replicas of themselves "one little son" and "one little daughter" than they pay $256 (= £137.29 or €174.21) for one day's admission.

You would think one wish one a star which might come true is the hope that such a corporation could grant a contract. But the 2,300 approximate workers who are engaged in this struggle have worked since the end of January without contract. Disney also proposes permenantly denying health benefits to employees who work fewer than 30 hours or 5 days per week. The Trade Union representing the housekeepers, bellmen, bartenders, dishwashers, and cooks employed at the Disneyland, Grand Californian, and Paradise Pier hotels, says that free health insurance is really the only sweet thing about an otherwise bitter contract. Without a raise in the average hourly wage of $11.30 the Union says the workers of Disney will priced out of health potions & clean white teeth. They mightn't even afford diapers as the Americans call nappies for their spawn.

But beneath the dungeons of Disneyland California there is a lower level of acknowledged poverty. The minimum stage wage is set at $8.00 which allows a Disney worker to buy one healthy BigMac more per hour and pray the government of Schwarzenegger thinks to copy the UK and confiscate their fattened youth soon.

& below that is the real level of undreamt and unsong poverty.