PRESS RELEASE: Police want to lock up the organisers

For Immediate Release
Date: August 18th 2008
By: "The Promoters" 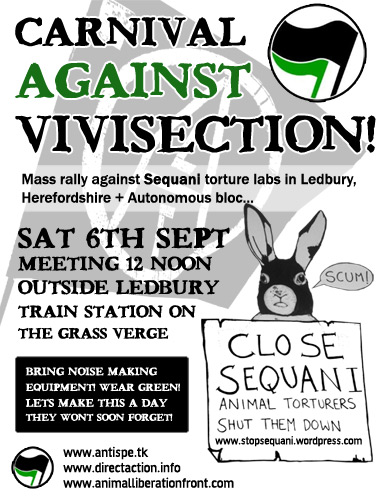 One of the posters advertising the event

PRESS RELEASE: Police want to lock up the organisers

The police state are requesting organisers of an anti-vivisection march and rally in Ledbury to contact them in the interests of locking up the responsible activists, similar to how the previous Sequani organiser was imprisoned for four and a half years under dubious conspiracy laws, SOCPA.

Hereford Police have recently become aware of the Carnival Against Vivisection, which is being promoted to take place in Ledbury on Saturday, September 6, meeting at the grass verge near the train station 12noon. The event is in solidarity with political prisoner Sean Kirtley, who was previously jailed for legally organising.

Despite making a number of enquiries, they have been unable to identify the organisers behind the day of action. Promoters doubt the authorities will ever find an activist responsible. Others believe that Hereford Police should be held accountable for their actions as part of the Carnival Media Team.

In support of the event, a militant anti-speciesist said in response to the article:

"The reason there isn't any organisers is because the last person who put their name on the piece of paper (Sean Kirtley) got 4.5 years in prison for it."

In repy to: 'Police want to hear from animal protestors', Ledbury Reporter