ISS offices visited by RMT and No Borders.

On Thursday the RMT called a demo outside the offices of ISS, a contractor that employs London Underground cleaners. Not only had there been a lot of bullying and intimidation of union reps and members by management. But to hit a new low, ISS had been exploiting new immigration rules to arrange ‘appointments’ for their employees, many of whom are immigrants and refugees. In some case that could mean people being deported to torture and death.

The RMT were also joined by No Borders and other supporters who briefly occupied the lobby of the firm. Police were called and those inside where removed. They continued the demonstration outside where they made a hell of a racket for quite some time. One person was arrested for reasons unknown. 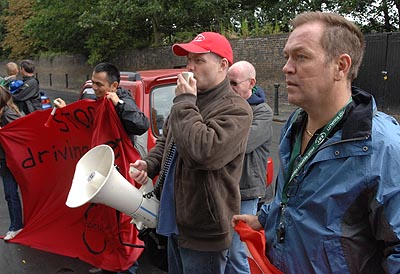 The RMT arrive outside the ISS offices... 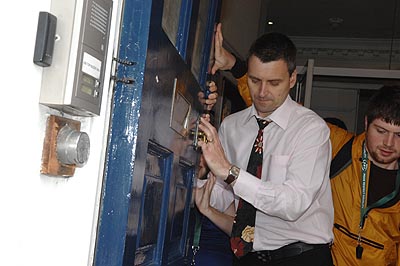 ...to find a debate raging within as to whether the door should be closed... 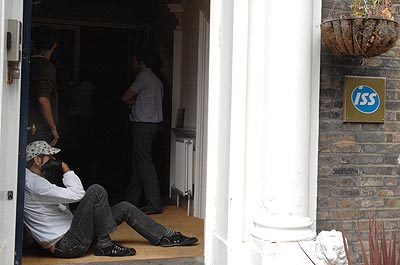 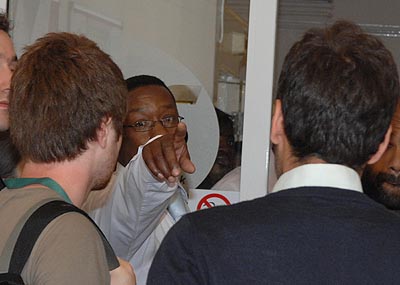 The security guard gets the hump. 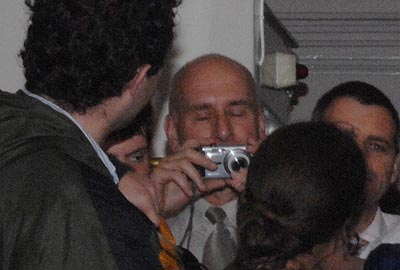 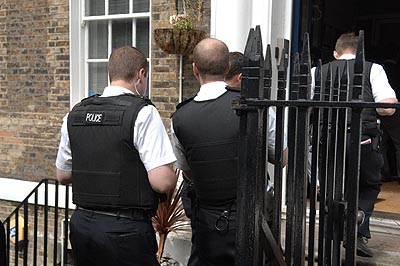 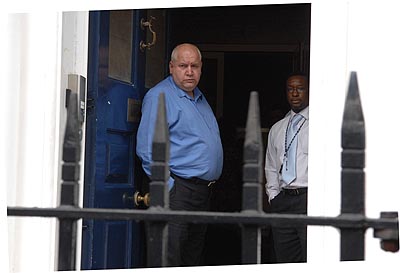 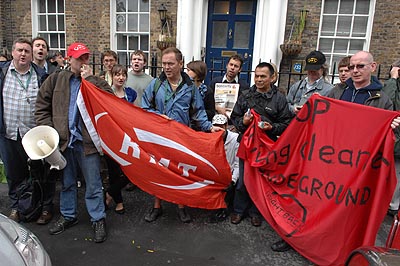 ...as the demo continues outside.

From ISS to OCS
All is not well for the cleaners on the Eurostar either. This press release announcing strike action today:

Publication Date: August 18 2008
MORE THAN 120 RMT cleaners working for OCS on its Eurostar contract will strike for 24 hours from 06:00 on Bank Holiday Monday, August 25, in their campaign to end poverty pay and win decent working conditions.

The cleaners, whose hourly pay is more than £1 an hour below the London Living Wage, returned a 100 per cent vote for action and will not book on for shifts that commence between 06:00 on Monday August 25 and 05:59 on Tuesday August 26.

“Eurostar trades on its ethical reputation and claims to tread lightly on the planet, yet it seems happy for OCS to stamp all over the people who keep their trains and stations clean,” RMT general secretary Bob Crow said today.

“OCS are already paying poverty wages and the paltry 25p an hour they have offered our members is well below inflation and would drag their living standards down even further.

“Neither OCS nor Eurostar can be in any doubt about how angry our members are, because not one vote was cast against taking strike action, and dozens more cleaners signed up to the union since the ballot began.

“No-one living in or around London can live on £6.37 an hour, but that is what OCS pays, and there is not a penny extra for overtime or bank holidays.

“That alone is a disgrace, but on top of that there is no pension, no sick pay and only the bare minimum legal holiday entitlement

“It would be great if people using Eurostar’s services over the bank holiday could let the company know that it has a moral duty to stop this shameful exploitation.

“OCS is raking it in on the backs of our members’ work and Eurostar has never had it so good, so there is no excuse for either of them,” Bob Crow said.