After many weeks of bitter sectarian backbiting the demo against the BNPs Red White and Blue festival (RWB) finally went ahead. Upon reaching the event I was greeted by local IMCer Tash who informed me that there was a clear two way split in the assembled anti fascists. “Only two?” came my reply. There has never been a single campaign so effective at dividing the left as anti fascism. I suppose if nothing else our modern day Peoples Judean Fronts should be congratulated on their consistency. In the end they did manage to stage an official march on the hate-fest while elsewhere more militant anti fascists took the cross country route… 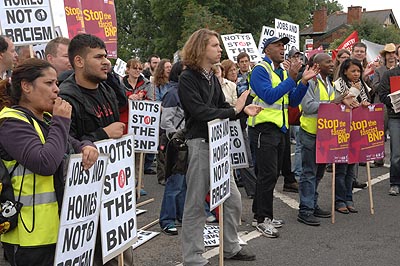 The rally in Codnor. 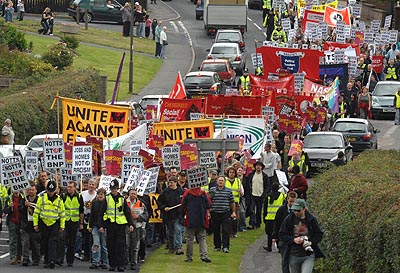 The march to the offending farm land. 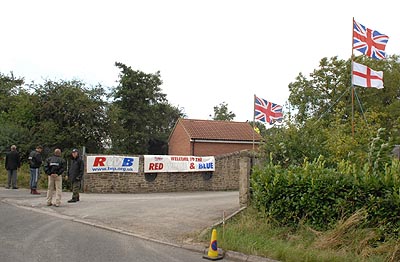 Meanwhile at the vibrant RWB... 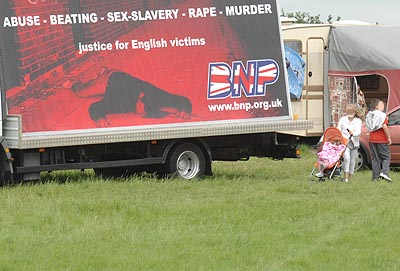 ...there is something for all the family. 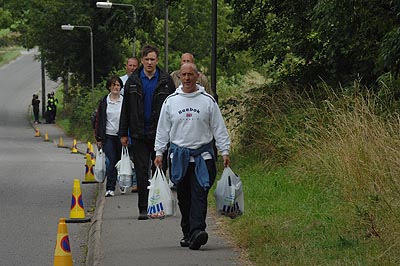 The Tesco to campsite booze carrying event was particularly popular. 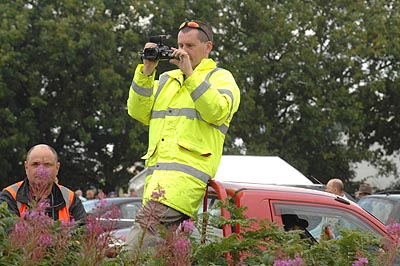 Though some festival punters... 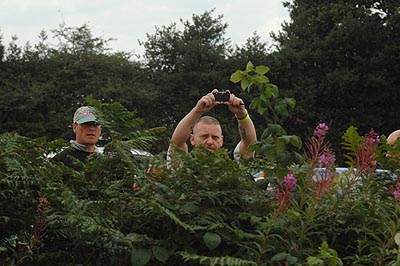 ...seemed to find the road outside more interesting. 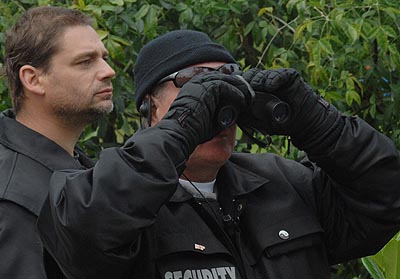 The binocular bootboys spot something out of place... 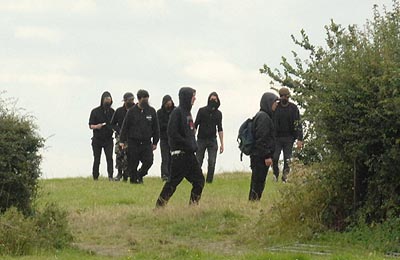 ...hostile visitors in the field opposite... 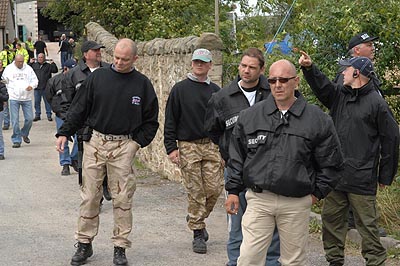 ...so they let the knuckle draggers out of their cage. 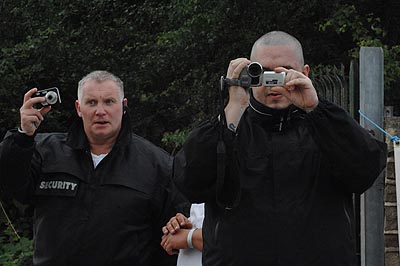 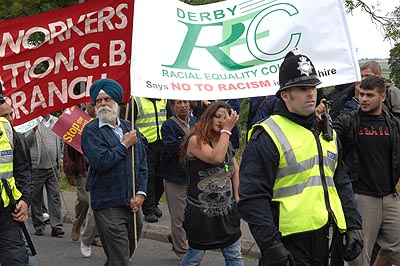 ...as a delegation of the opposition come past. 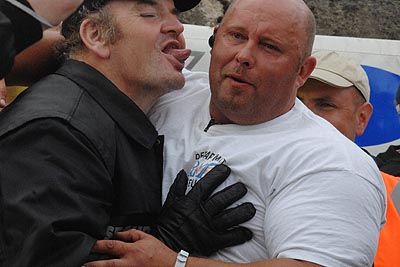 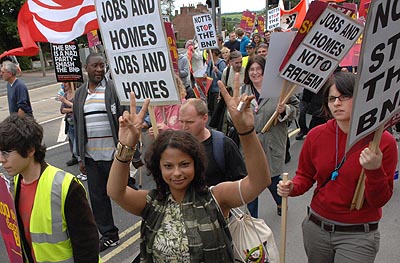 The demo heads back to the rally.

The march itself numbered around 1,000 and proceeded up the hill towards the site of the RWB site. At the entrance to the lane leading to the village the Police stopped the majority only allowing a small delegation through to march passed the entrance of the offending farm. There was a bit of pushing and shoving by the detained marchers but there were no arrests or breaches of the Police line.

Meanwhile at the gates of the hate fest an eerie silence was broken only by the sound of the media and BNP security team photographing each other. Its unclear what goes on at the RWB but there were no sounds of laughter or music coming from within. The occasional moaning of festival goers trudging into the gates with heavy bags of booze could be heard. The locals Tescos seems to have been the main beneficiary of the council denying the alcohol license. Griffin conceived the RWB a few years ago after he attended the French FN festival, which takes place in a breathtaking valley and has become the alleged benchmark of Nationalist festivals. By comparison the RWB is a poorly equipped campsite in a field of manure near Heanor, with no bar and some unspeakably crap folk music. Not many people were coming in or out. Those that were, looked more like they were attending a funeral than a festival. A friendly billboard greeted those arriving with the words: “ABUSE BEATING SEX-SLAVERY RAPE MURDER justice for English victims.” Such cheerful rhetoric for a family event? And what about the Welsh and Scottish ‘victims’? Is the BNP about to become the ENP and advocate the rebuilding of Hadrian’s Wall?

The Anti Fash were stopped from discussing the merits of nationalism with the BNP by riot police. The delegation from the main demo arrived not long after and marched passed the entrance twice, trading insults and chants with the fascists, before heading back to the village for another rally. Reynolds was warned by the cops not to swear again or face arrest.

Returning to the smoke by coach, news reached us of 33 arrests over the course of the day. Over £110.00 was collected for them and given to an Antifa representative. The three hour journey was also livened up by a little competition to determine what RWB might stand for?
Some of the winning entries included:

Feel free to add your entry below….