Invitation to Roma solidarity demo on 19 September 2008, in Manchester 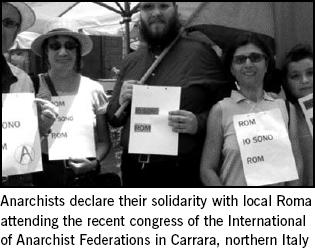 The Anarchist Federation is having a demo on Friday 19th September at the Italian Consulate in Manchester (the day before the big demo at the Labour conference, also Manchester). It's at 11.30am, at 111 Piccadilly Manchester, M1 2HY.

The demo follows serious attacks on Roma people in Italy including physical attacks on camps, threats of fingerprinting of the Roma population (including children) and right-wing/fascist manipulations by Italian politicians & press that are linking Roma people to 'crime' and 'illegal immigration' which is increasing popularist calls for their expulsion from Italy and destruction of Roma camps.

Manchester No Borders & Roma groups in the north-west have already confirmed they will participate.

PS details of an anarchist/no borders bloc on the Saturday demo are here:

http://nobordersmanchester.blogspot.com/2008/08/no-borders-meets-labour-party.html
All welcome to this as well.

Page 2 of the AF's Resistance bulletin 'Festival special 2008' has an article about solidarity by anarchists in Italy including mention of support for "Roma [who are] are self-organised and defend themselves with the support of sympathetic groups including anarchists. Roma occupied an empty building in Milan for four years and later a country house in the region along with anarchists. There they were able to defend themselves better from attack. Other anarchists are living with Roma in their camps to help keep out neo-fascists. Anarchists have also demonstrated against the Red Cross because of its involvement in this early phase of ‘ethnic registration’ and in migrant detention centres more widely."

http://www.indymedia.org.uk/en/2008/08/407678.html
---
"Italy's campaign against the Roma has ominous echoes of its fascist past, and the silence of our leaders is deafening" Seumas Milne, The Guardian

500 years of shameful repression in Europe of the various Roma groups
Thomas Hammarberg, Commissioner for Human Rights, Council of Europe

Roma people in Italy are under attack. The Italian government has passed a series of laws restricting the movement and freedoms of Roma people. All Roma people are being targeted as potential criminals and harsh laws condemning illegal immigrants to many years imprisonment are being used against Roma communities.

Silvio Berlusconi, the Italian President under investigation for corruption, has put troops on the streets and used the newspapers and TV stations that he owns to stoke hatred and fear.

Already, Roma people have been attacked and burned out of their homes as a result of this campaign of hate from the very top of the Italian government.

See also:
Roma communities feel threatened more than ever before in Italy

An information leaflet for the demo is now now available for download:

Brief demo report and many photos 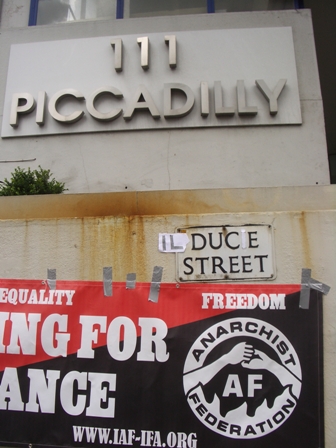