Innovative Minds and the Islamic Human Rights Commission are calling on campaigners to create awareness in their communities about the boycott of Israeli goods, and in particular Israeli dates, this Ramadan. 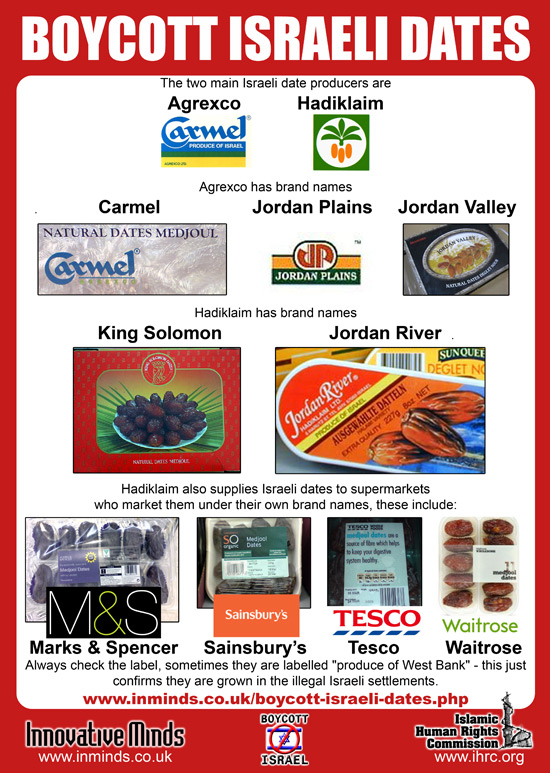 In 2004 the International Court of Justice ruled that the Israeli settlements are illegal – they are built on stolen Palestinian land. Growing dates is one of the major agricultural activities carried out by nearly half of the illegal Israeli settlements located in the Jordan Valley – it’s their most profitable crop , and contributes significantly to their economic viability.

Picking of the dates is hard work, so the Israeli settlers bring in Palestinian labourers to do this back breaking work. During the pruning season the workers are dropped on the date palm trees by a hoisting crane at 5 o’clock in the morning, left perched on palms that soar to a height of 10 or even 12 meters – the height of a three- or four-story building, left there swaying in the wind for up to 8 hours without a break and with no means to come down until the crane returns at the end of the day, the workers cling to the tree with one arm and work with the other to meet their quota. They can’t even take a break to go to the toilet. If they complain or fall behind their quota they will lose their jobs and their families will starve.

But the Israelis prefer to employ children – even issuing them official work permits, as they are quick and light, can climb trees faster, work for less and it’s easier to cheat and humiliate them. Out of desperate poverty Palestinian families are forced to take their children out of school and hand them over to the settlers to work for a pittance.

Most of the Israeli date crop – up to 80%, is exported, mainly to Europe where it has around 10% market share. In 2005, dates were Israel’s leading fruit export.

The two major Israeli companies involved are Agrexco and Hadi-klaim.

Agrexco, half owned by the Israeli government, handles 60-70% of all goods produced in the illegal Settlements. Its dates have brand names Carmel, Jordan Plains and Jordan Valley. Last September, a week before the start of Ramadan, Carmel boasted in their press release that they had managed an early crop of dates in order to meet the Ramadan demand for dates from Europe’s Muslims!

Hadiklaim sells 65 percent of the all dates produced in Israel. Its dates have brand names King Solomon and Jordan River. They also supply Israeli dates to supermarkets and retail chains who market them under their own brand names. These include Marks & Spencer's, Sainsbury's, Tesco's, and Waitrose.

Sometimes they are labelled “produced in the West Bank” – this just confirms they are grown in the illegal Israeli settlements.

Peace activists who visited the Palestinian village of Fasayl in the Jordan Valley last year discovered that villagers are slowly being forced off their land by the Israeli army. The only livelihood left open to them is to work for Carmel Agrexco. The activists even spoke to two Palestinian workers whose land had been stolen and were forced to work for Carmel in order to feed their families – they had a message for the peace activists, a plea for anyone who would listen – they urged them to take action against Carmel Agrexco and such companies that support Israeli apartheid. What excuse is left for us not to boycott Israel? If you oppose the illegal settlements target their dates. Boycotting can make a real difference.

For full details of the campaign, leaflets, videos, sample letters for shops, etc. please see the campaign page at: