Baluch [also spelled Baloch] who got politically divided under Biritsh Imperial rule are today stateless in southwest Asia. Their homeland was used for testing Pakistan's so-called Islamic Bomb in May 1998. Their persecution remains unmitigated both in Iran and Pakistan. A new body has been formed to unite the Baluch, a fiercely individualistic people.
Picture shows the Khan of Kalat Beglar Begi [Prince among the Princes] Suleman Daud Ahmedzai with international human rights activist Peter Tachell protesting Pakistan's forced annexation of Baluchistan. 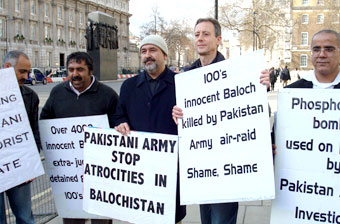 According to a Press release, the new body will attempt to address the aggregated gross human rights violations in Baluchistan by both Iran and Pakistan. Baluch activists complain of an unseen Berlin Wall that was erected in Baluchistan when Iran occupied a huge part of Baluchistan the size of Nevada in 1928 , but the British who then controlled their homeland looked the other way. The area in Pakistan is slightly bigger than New Mexico, while the territory inside Afghanistan is the size of West Virginia. The artificial divison has left Baluch all over the world run in different directions, politically.

Through a resolution the Baluch from different parts of the world said they have decided to form Baloch Human Rights Council with an objective of securing human rights, land rights of indigenous Baluch populace, release of political detainees, stopping forceful disappearance of Baluch political and human rights activists, promoting Baluchi language as medium of instruction, stopping summary executions of Baluch youth, ensuring Baluch control over natural resources of Baluchistan, recognition of Baluch culture and heritage, ensuring freedom of thought and religion and stopping testing of nuclear weapons in Baluchistan and stopping growth of religious extremism and terrorism

A woman activist , Bibi Mahnaz Baloch, has been brought to the forefront of the new body as its cultural secretary.

The London-based international effort replicates the Baluch experience in Canada where the Baluch Diaspora, in spite of the diverse political backgrounds, undertake joint action on issue to issue basis on human rights violations in both Pakistan and Iran.

The new body was announced after two days of brain-storming sessions. In addition to the interim committee a general council and a constitution committee were also formed.

Both the Khan of Kalat and Nawabzada Hairbiyar Marri are in self-exile in the U.K.

North America was represented at the moot by Dr. Zafar Baloch.

“This was a truly historic event. It succeeded well beyond my imagination,” Dr. Zafar Baloch said. He said delegates from Turkmenistan and Africa will also partake in the BHRC deliberations.

Meanwhile, Baluch notable from Mekran and board member of the American Friends of Baluchistan, Mohammed Ali Baloch welcomed the formation of the new group and hoped that it will give a fresh impetus to the Baloch struggle to get justice at the various international fora, especially the International Court of Justice at the Hague.

Dr. Zafar Baloch said the BHRC will crusade for victory at the ICJ.

Mohammed Ali Baloch, speaking to this correspondent from Philadelphia, said the AFB looks upon all organizations, big or small, both inside and outside Pakistani and Iranian Balochistan working for Baloch emancipation with equal respect. He said the new organization is a valuable addition.

“Some of the faces in the new body and their past politics need no introduction,” said Muhammad Ali Baloch, adding that what delights him the most is the point on ending nuclear tests in Balochistan.