In the moment, the participants of the 20th Ecotopia international environmentalist gathering at Sarikum nature reserve, Sinop, on the Turkish Black Sea coast, are awaiting and preparing for forceful eviction of their camp site by the Jandarma (Turkish Police), which are already present with undercover agents and several cars. The 70 participants from over 30 countries will peacefully resist this unjustified raid. The offical reason for the announced eviction was the announcement of the intention to take part in the weekly permitted press conference of the local anti-nuclear initiative SÝNYAD (Sinop Nükleersiz Kent ve Yaþam Derneði). 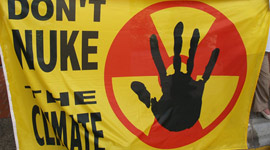 Approximately 10 armed officers, ordered by the governor of Sinop, had already raided the camp on Friday to threaten forceful eviction if the site was not emptied within 3 hours. Later, this deadline was postponed to the next morning. Two days before, six participants of the camp together with local activists were arrested during an action in front of the office of the Turkish Nuclear Energy Agency (TAEK) in Sinop. After only ten minutes of spreading flyers and holding a banner, they were physically aggressed by undercover police without any prior warning. They were held in a police station for several hours and fined for not obeying police orders. Police have also shown supression towards locals of Gerze town who approached the Ecotopia gathering to request solidarity against the Thermal Coal Plant planned for construction in their town.

“We are shocked by the behaviour of the police and local authorities who did not allow any peaceful protest to happen. They have also been constantly threatening participants of the camp and denying them, as well as locals, the right to publically express their opinion. Now they have cancelled the camp just because we announced that we would like to take part in an officially permitted anti-nuclear protest. This is not what we consider to be freedom of speech! ”, says Lenka Kukurova, representative of European Youth for Action (EYFA), the network that supports the Ecotopia gatherings.

The protests are directed against the plans to build a Nuclear Technology Centre in the Sinop region. The 20th international Ecotopia gathering is taking place in Turkey this year, to support local movements to keep Turkey free of nuclear power. Participants of the camp are members of environmentalist movements worldwide. They want to draw attention to the fact that nuclear energy is dangerous, polluting and expensive. Instead of investing in nuclear technology, Turkey should use its great potential for solar and wind power, as well as increasing energy efficiency.