Passengers hurrying into the main check-in at Edinburgh international airport on 22 August were greeted by an unusual sight. A massive banner proclaimed: “ MEXICO ...Sun…Fun…bloomin’ nice beaches…”, alongside a painting of a palm tree. A somewhat eccentric Mexican tourist board initiative perhaps?
Not exactly. “Torture….Death Squads…Human Rights Breaches…” continued the lower half of the banner, with a carefully painted AK47 illustrating the point. 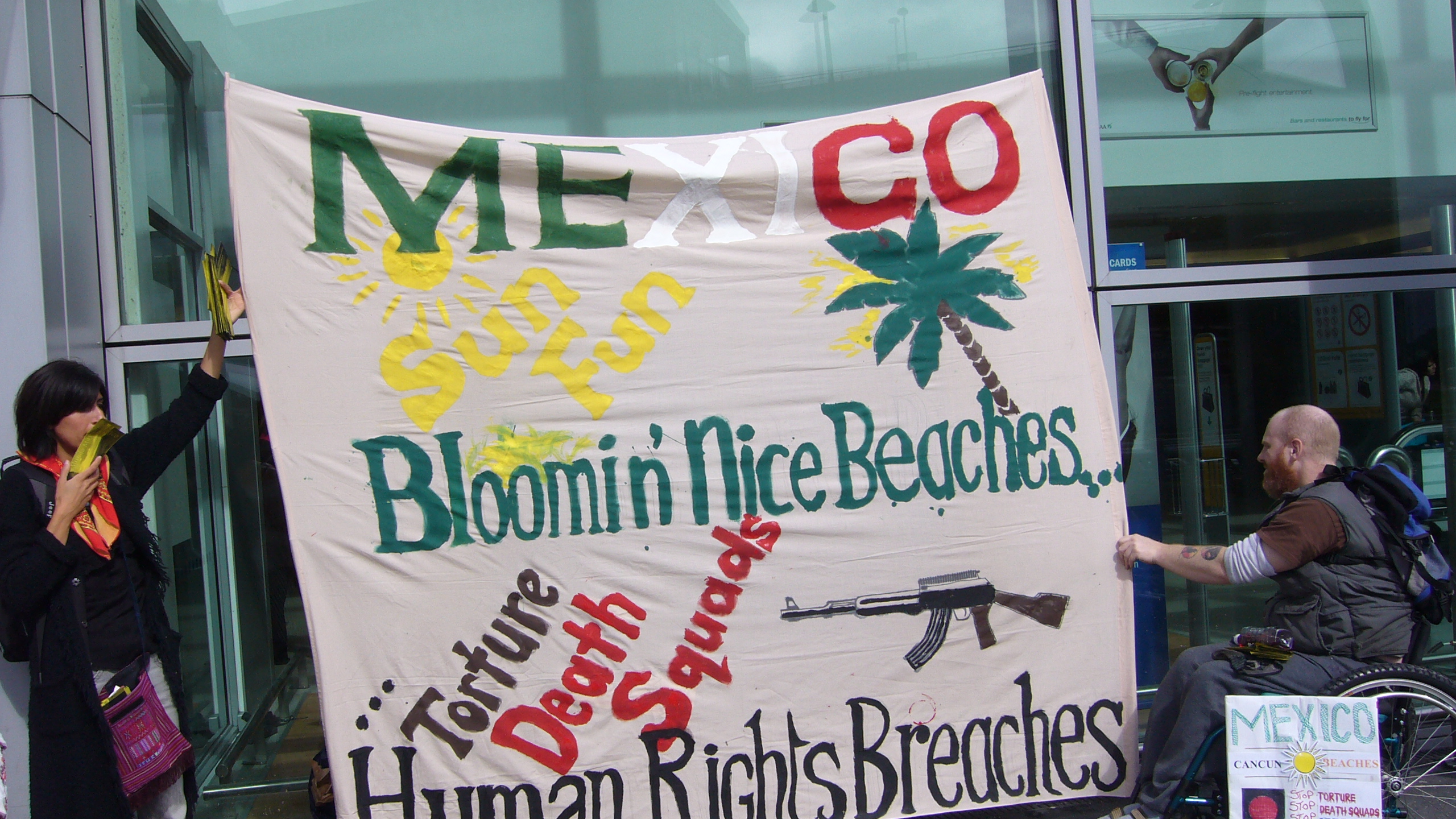 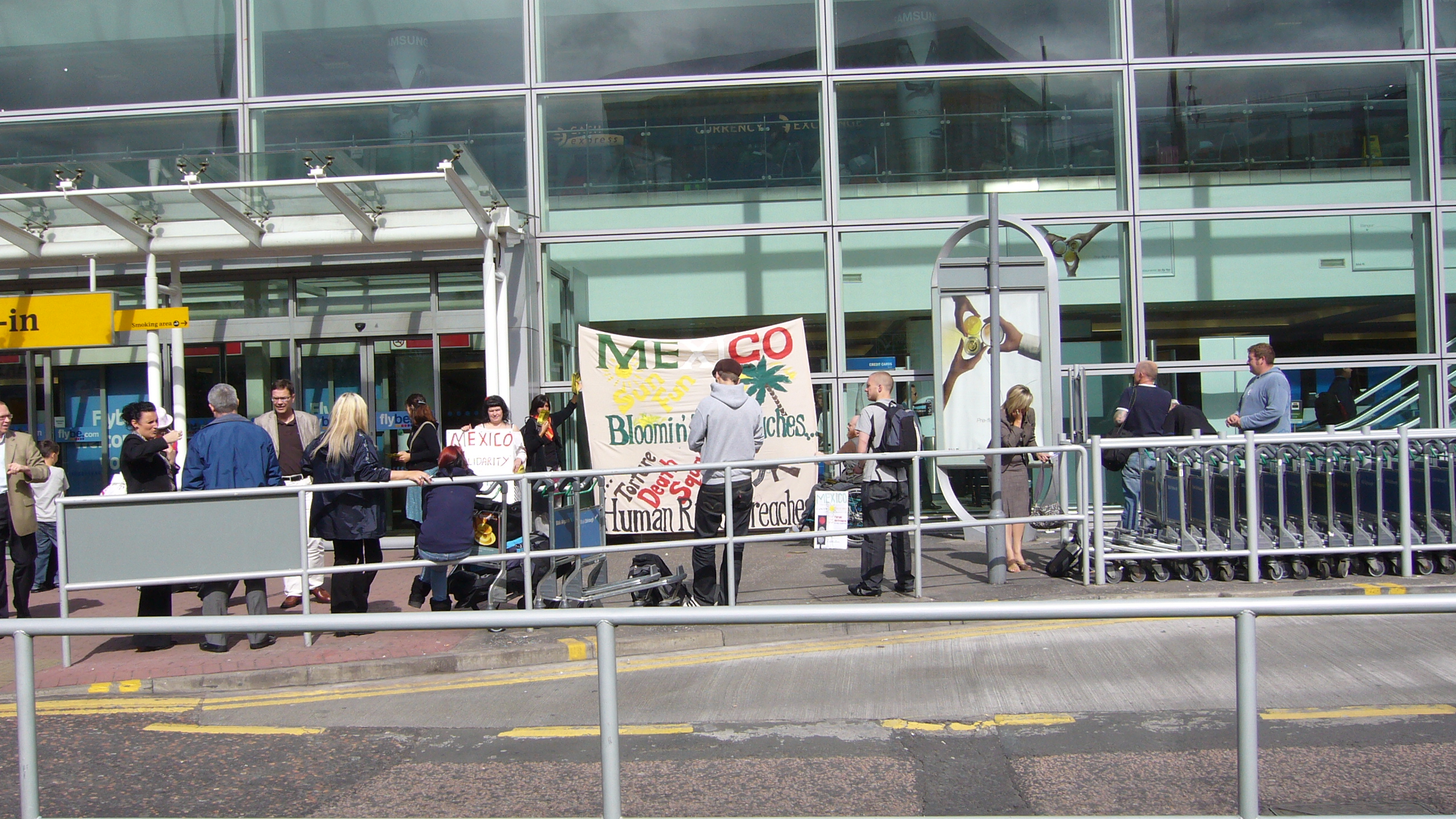 Demonstrators from Edinburgh Chiapas Solidarity Group were denouncing Mexican government repression, particularly in the southern state of Chiapas, where the zapatista indigenous movement has created over a thousand autonomous “communities in resistance.” Displaying a placard SOLIDARITY WITH THE ZAPATISTA COMMUNITIES AGAINST EVICTIONS the protestors distributed hundreds of leaflets to travellers at the busy airport.

At first sight the leaflets appeared to be a tourist brochure. Closer examination revealed photos of armed soldiers and victims of torture alongside the golden beaches and verdant rainforest. After explaining the reality of Oaxaca and Chiapas, and highlighting the attempts to evict the zapatistas of Bolon Ajaw to build a tourist development at the Agua Azul waterfalls, the leaflet concluded : “Practise solidarity with the indigenous people, who are asserting their dignity by resisting.”

WAR AGAINST THE PEOPLE

Esther McDonald of the Solidarity Group said : “The Mexican government are stepping up the long-running "war of low intensity" against the zapatistas. The army have invaded zapatista villages, zapatistas have been arrested and tortured, political prisoners in Chiapas have been on hunger strike, and paramilitary groups are active, with the active support of the army “Special Forces”.

The protest, held right outside the main check-in section of the airport, soon attracted the attention of Security Staff. Despite its unauthorised nature, the demo was able to continue for over half an hour until threats of police action prompted the demonstrators to relocate to the centre of Edinburgh. (The whole of the airport is designated “private property”, thus removing the legal right to protest there.)

The protest then continued for around two hours more in Edinburgh's principal street, Princes Street, attracting sympathetic responses from some passers-by, including a woman who used to live in Oaxaca.

The demo coincided with leafleting actions at airports in Madrid, Hamburg, Frankfurt, and in Bournemouth, where a demonstrator reported: “There was more interest than anticipated and some confusion, before being escorted out of the premises.”

The protestors at Barajas-Madrid airport reported that the day’s activities were going very well, and that with the increasing number of flights to Mexico “the airport and the departure lounges are now full of people who now know a bit more about their destination.”

A spokesperson for Edinburgh Chiapas Solidarity Group said: “'The zapatistas' autonomous communities in resistance are an inspiring example of how people can control their own lives and share resources in an egalitarian way. They show people the world over that we don't need the bad governments and the profit-hungry corporations."

“It is vital that we organise internationally to give solidarity to the zapatistas against the Mexican Government's attempts to evict them from their lands. These attacks are linked with plans for multinationals and international governments to intensify capitalist exploitation of the whole of central America, through the Plan Puebla Panama.”

The Zapatistas hit world headlines on 1st January 1994 when they staged an armed insurrection and captured seven towns in Chiapas. Recently they have declared that they will create autonomous communities “without the permission of the bad government” and have encouraged all oppressed groups to join together, both nationally and internationally through “The Other Campaign”.

Edinburgh Chiapas Solidarity Group is twinned with zapatista autonomous municipality “16th February”in the Highlands of Chiapas, and raises funds and awareness for their autonomous health clinic and primary schools. Members of the group have visited the indigenous villages in the area, and made a short film about the construction of the clinic, built with the aid of over £15,000 from Scotland.