Two small boats carrying 42 human rights activists broke the siege of Gaza. They sailed from Cyprus in defiance of Israeli threats to intercept the boats to enforce its blockade of Gaza. The arriving boats were greeted by thousands of jubilant Gazans and former Palestinian Prime Minister Ismail Haniyeh. Intense international support was crucial in persuading Israel to allow the boats through. 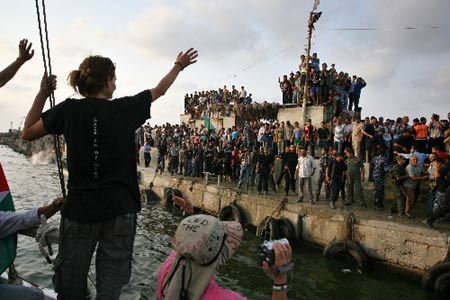 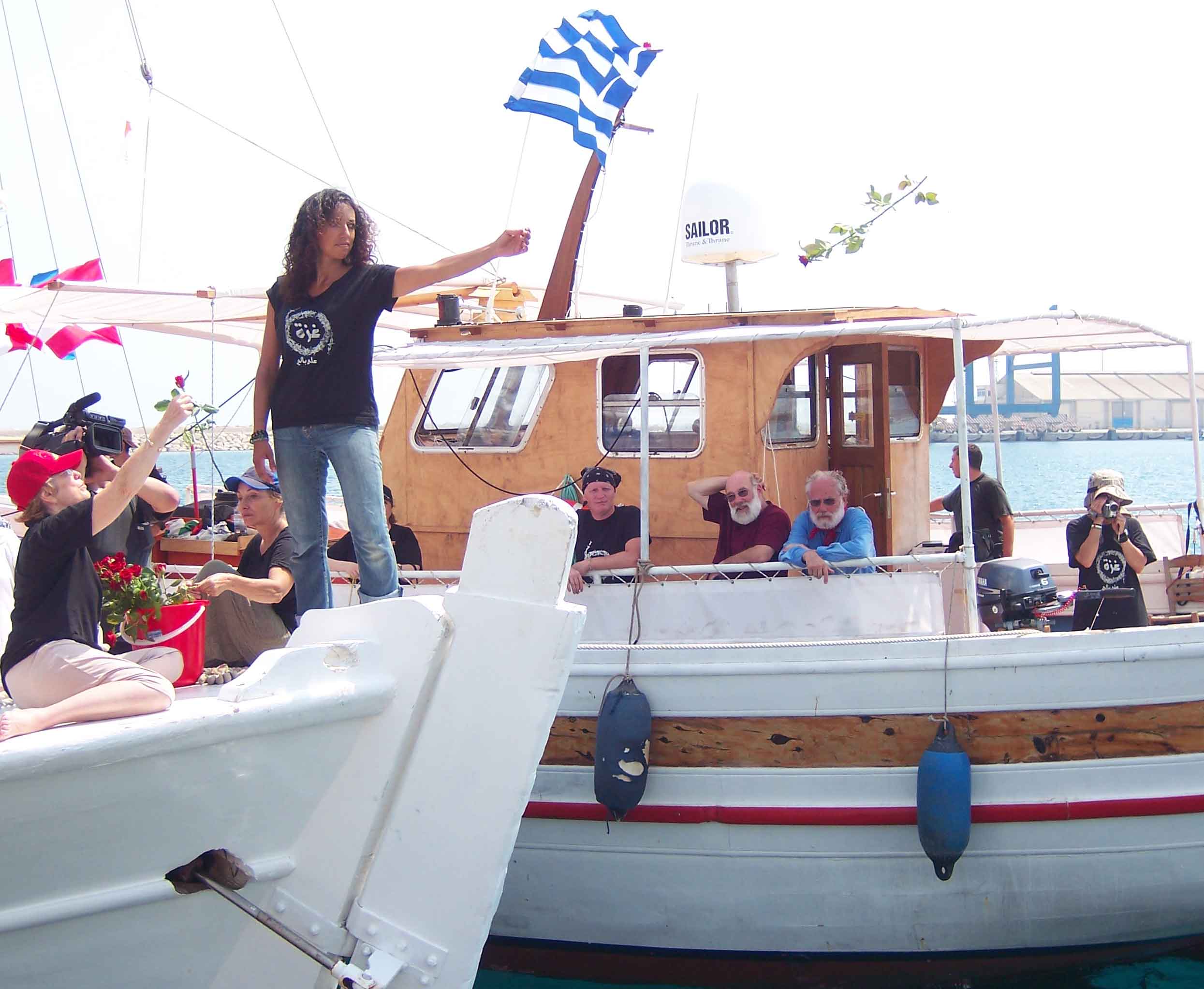 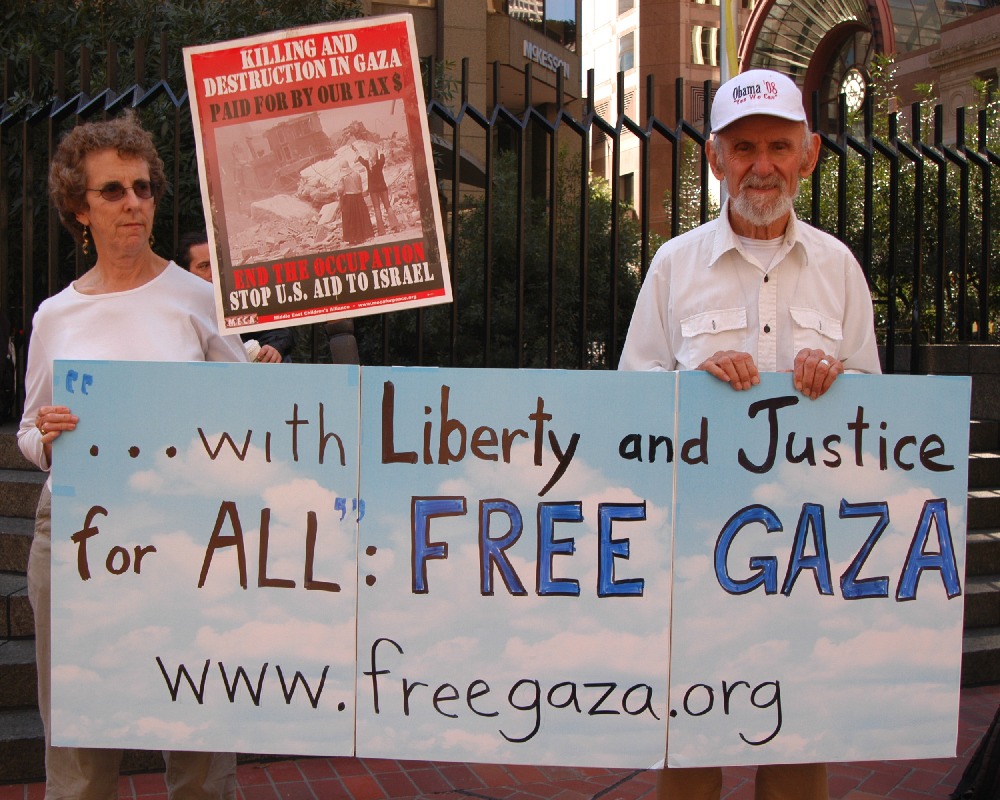 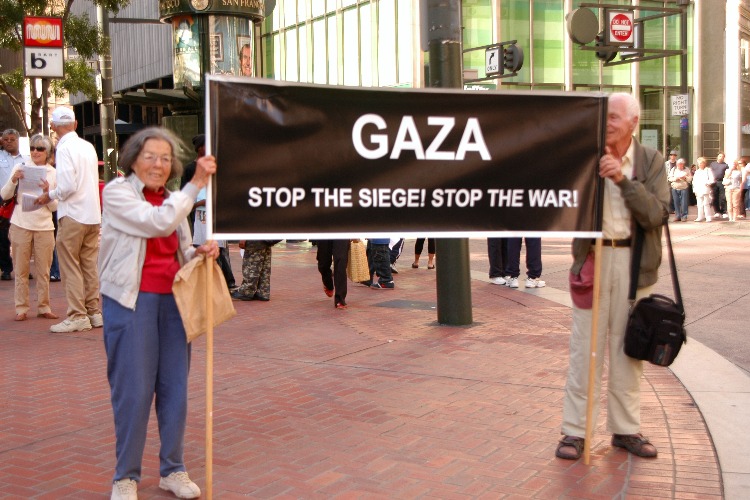 Forty-two unarmed human rights activists from 17 different countries, including Jews from Israel and an 84-year-old Holocaust survivor, have broken the Israeli siege of Gaza by sailing two small boats from Larnaca, Cyprus to Gaza City. They arrived in the early evening on Satuday, 23 August 2008 to the cheers of thousands of jubilant Palestinians who lined Gaza Port. [Xinhua News Agency photo]

Former Palestinian Prime Minister Ismail Haniyeh came to welcome the Free Gaza activists. He said, “We call for more activities to break the unfair siege imposed on our people.”

As the Free Gaza boats approached Gaza Port, Palestinian boats went out to greet them. Jamal al-Khodari, head of the Popular Committee to End the Siege, was on one of the boats. Going out to thank the visitors for breaking the siege of Gaza, he said, “This is a great moment to see people supporting our cause to show solidarity with us and to tell the world a message that the unfair siege imposed on the Gaza Strip should end very soon.”

The international activists had been preparing for this historic voyage for over two years. They sailed in two small Greek-flagged fishing boats in a bold attempt to break through the Israeli naval blockade of Gaza which bars any ships from entering or leaving its ports. The boats were renamed SS Free Gaza and SS Liberty, the latter in memory of the 34 U.S. Navy sailors killed when Israel forces attacked the ship during the Six Day War in June 1967.

In response to Israeli threats to intercept and board the boats, residents of the San Francisco Bay Area demonstrated their support for the Free Gaza activists on Thursday, 21 August 2008. They gathered in front of the office of Senator Diane Feinstein at One Post Street in downtown San Francisco to demand that members of Congress use their power and influence to protect the non-violent human rights activists in the event that the Israeli Navy moves to intercept the boats.

With mounting media coverage in Europe, the Middle East, Asia, and on the global Internet, it has become increasingly clear that any Israeli attempt to deal with the boats military would not go unnoticed around the world. The Internet “chatter” on the subject was a clear demonstration that the Free Gaza boats had attracted worldwide attention, and that the Internet was playing a crucial and revolutionary role in levelling the playing field between common people everywhere and the fourth most powerful military in the world.

In the end, the Israeli government decided to avoid a potentially embarrassing confrontation at sea by allowing the boats through to Gazan waters. It is widely believed that many Western diplomats quietly advised Israel to back down from its threats, while avoiding public comments.

All passengers had been carefully screened to ensure that no firearms of any kind were brought onto the boats. This was not only a challenge of purely non-violent civil disobedience to the Israeli naval blockage of Gaza, but it also provided a way for Israel to back down by ultimately acknowledging that the activists and boats did not pose any threat whatsoever to the security of Israel.

The astonishing success of the Free Gaza project has lifted the hopes of the nearly 1.5 million Gaza residents that the siege of Gaza can and will be lifted, and that this will pave the way for a just and peaceful solution to the 60-year-old conflict.