Hamburg ahoi! A summary of the Anti-racism and Climate Camp in Germany

From 15 to 24th August anti-racists and environmentalists pitched their tents in Hamburg, in a joint camp with shared infrastructure, spaces and time. Both in the camp itself and during actions the attempts were also to stand together and build alliances – the action high points of the camps included the blockade of the deportation airport Fuhlsbüttel, the occupation of the Moorburg coal power plant and destruction in a foreigners office 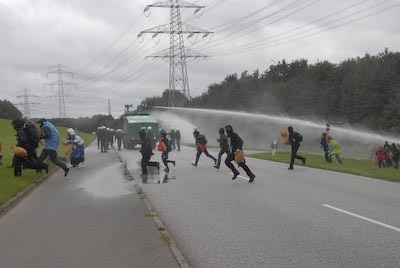 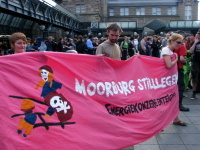 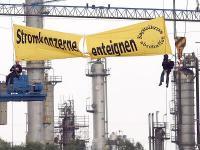 Next to this the week offered time for debates, workshops, presentations and practical solidarity as well as multifaceted protest and lived utopia.

Here is an overview of some actions that took place during the week – theres many more reports still to come.

DAY 1: SATURDAY 16TH: After weeks of hysterical articles in the corporate Hamburg media about the upcoming 'chaos camps' participants of the camps decided on a warm-up demo : photos:

DAY 2 : SUNDAY 17TH: Global pass festval with theatre, anti-racist football tournament and an all too rare burst of sun. Added to this was a critical mass (

DAY 3: MONDAY 18TH: This was a day challenging everyday racism. Actions included a scavenger hunt through the city, a Reclaim your Market action (

DAY 4: TUESDAY 19TH About 300 people travelled to the city of Lübeck, to protest at the national police training academy. There, amongst others, Eurpoean-wide border control agency hold training seminars. The main work of Frontex is to stop unwanted migration to Europe.

DAY 5: WEDNESDAY 20TH: Day 5 was a busy one: it included actions on land and water against the building of the Isilu Dam(

http://de.indymedia.org/2008/08/224945.shtml ), and the first occupation of the construction site at Moorburg coal power plant. About 40 people occupied the site, with 5 people climbing a crane with banners. 200 people from the camp also spontaneously decided to join the occupiers, but were stopped one kilometer away by police deplying batons against them Despite this small groups of people made it through police lines to support the occupiers. It then came to two groups of people surrounded by the police, and a spontaneous demonstration. Except the people on the cranes, everyone on the buildng site was taken into police custody and taken away from the area. Full report and photos:

Action was also happening elsewhere as a group of about 30 masked people in broad daylight smashed up the 'foreigner affairs office' part of the local government office. (this is the government office responisble for deporting people for example). Windows were broken, as well as computers, and a fire extinguisher which had been filled with red painted doused the office walls, technical equipment and furniture.

In the airport an unaccompanied suitcase sparked an evacuation due to bombscare: the bombsquad found a note against deportation inside.

As well as this an interactive anti-racist tour of the city 'its raining caviar' was violently attacked by police. 4 people were without warning brutally arrested, one person beaten unconscious then removed still unconscious out of the ambulance and into a police car.
This tour had been addressing subjects such as everyday racism of police and residents of the area, gentrification, police harassment against transsexual streetworkers, and videosurveillance of the Reeperbahn and bordering streets, and was just ending as the police operation arrived in force and attacked.

DAY 6: THURSDAY 26THt: Day 6 seemed a bit quiter in comparision but continued a series of successful actions: About 40 people occupied the French consulate in Hamburg, demanding the release of 3 anarchist prisoners and in solidairty with illegalised people.

There was also demonstrations against deportation outside the foriegners office, hamburg international airport and Lufthansa.

DAY 7: FRIDAY 22ND: chaos at Hamburg airport. This was both an anti-deportation and anti-climate change action. Estimated is at least 2,000 people were making actions in the area, many of whom were underway in smaller groups throughout the airport complex. Toilets were flooded, various actions inside the terminals, demonstrations and barricades were built on roads into the airport. The police allege an officer was beaten so that his ribs broke.
Video from corporate media:

DAY 8: SATURDAY 23RD: despite constant rain about 800 people marched to the police lines infront of Moorburg coal power plant. Although Moorburg had been successfully occupied earily in the week, police were now prepared. Water cannons, pepperspray, and batons were all used in full force against demonstrators. A 'five finger tactic' did manage to get through police lines at times, as well as through forests and fences, but demonstators found each fence concealed yet another line of police and fences. Finally it was decided to regroup and move as a block back to the camp. People were also being picked of out of the demonstation by police snatch squads at this time.
report and photos: