State Department PowerPoint on Animal Rights Activism
A PowerPoint presentation, leaked from a division of the State Department, reveals that the government is briefing corporations about animal rights activists and offering “countermeasures” to protect corporate profits. 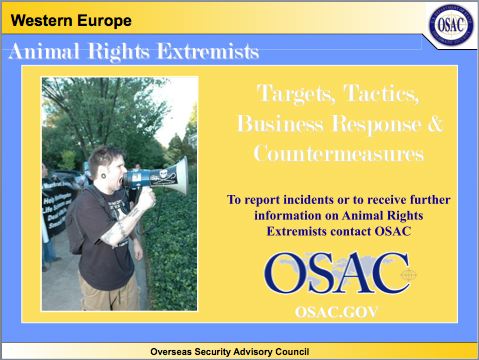 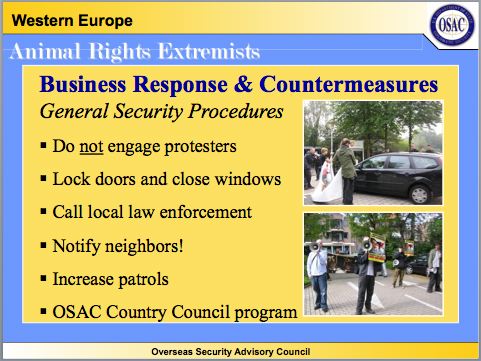 For years, the government has relentlessly pushed to label animal rights and environmental activists as “eco-terrorists” and domestic terrorists. The FBI even labels these groups the “number one domestic terrorism threat.” But this State Department PowerPoint puts the “Green Scare,” as many activists are calling it, in much different perspective.

It spells out, with startling candor, that animal rights and environmental activists are less a threat to national security than to corporate financial security. And it shows that the targets of this “War on Terrorism” aren’t just people burning SUVs: the targets are people using their First Amendment rights.

It’s a harrowing glimpse at what this country has become: the dissolution of all lines between corporate interests and government interests, between “terrorism” and free—albeit controversial—speech.

The presentation, “Animal Rights Extremists: Targets, Tactics Business Response & Countermeasures,” is by the Overseas Security Advisory Council, a division of the U.S. State Department. It was leaked to me by someone who attended the briefing, and I have made it available for download at GreenIsTheNewRed.com.

The notes section of the PowerPoint shows the comments of State Department officials, including a listing of illegal activist tactics by groups like the Animal Liberation Front, from arson to the beheading of a snowman (seriously). [If that seems unbelievable, check out the memo from DHS about “eco-terrorism” like tying up company phone lines.

But what’s most disturbing is how this presentation on “extremism” and “eco-terrorism” includes so much First Amendment activity. The first slide on “major tactics” lists four “extremism” examples: one has only happened in the UK (“physical assaults”) and the other three are legal (posting personal information, videotaping, and demonstrations at executives’ homes).

The State Department admits as much, noting that activists “push the envelope right up to the line where another step would mean they are breaking the law.” In other words, most of these “terrorists” aren’t committing any crimes.

But that hasn’t stopped the government from surveilling, harassing and demonizing legal activists. In fact, this State Department briefing includes a flier for the Animal Rights 2006 National Conference, a mainstream event with hundreds of attendees where I spoke about the Animal Enterprise Terrorism Act. This year, among the “terrorists” in attendance was Heather Mills.

“Although many legitimate activists attend these events,” the presentation notes, “the conference holds workshops on successful tactics used against your companies…”

So what gives? Why are these activists such a threat?

The first reason: money. These activists are directly targeting corporate profits. “Although incidents related to terrorism are most likely to make the front page news, Animal Rights Extremism is what’s most likely to affect your day-to-day business operations…”

These activists don’t just want reforms, they want to force corporations like Huntingdon Life Sciences out of business. And they’re “calculating, persistent and often effective.”

The second reason: activists aren’t afraid. Despite the “eco-terrorism” rhetoric, despite the FBI attempting to infiltrate vegan potlucks, despite Joint Terrorism Task Forces arresting activists for wearing masks, and on and on and on, activists aren’t backing down and they aren’t caving in to fear. That, after all, is the entire point of all the “eco-terrorism” scare-mongering: to instill fear in everyday people and make them afraid of using their rights. If this chilling effect doesn’t occur, well, the government and corporations have quite a problem on their hands.

“Never confront the protesters,” the State Department warns corporations. “These individuals are clever. Most of them know what their rights are…”

That, it seems, is the greatest threat of all.