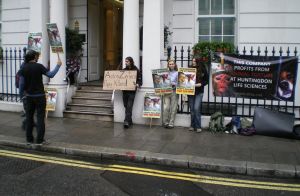 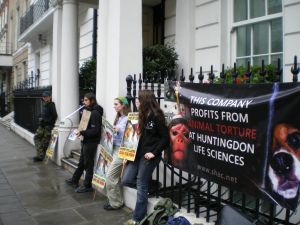 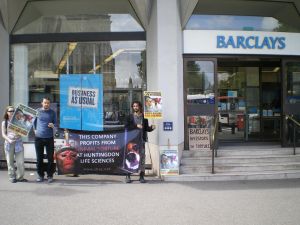 SHAC do early mornings, as AstraZeneca well know, and we were outside their office before 8am this Monday morning. There were 7 of us holding placards and handing out leaflets to the arriving staff. We leafleted all of their entrances. The management of this disgusting pharma giant rely on keeping the details of the animal torture they are involved in away from their lower-level members of staff, just in case they disapprove and quit (or worse: disclose information on them). The security were grumpy as always, and called the police as they always do. The police turned up a while later and saw absolutely nothing wrong with our demonstration, so we continued there until about 9:30am.

A couple of hours later we arrived at the Barclays at 2 Victoria Street (very near the Houses of Parliament). This was Barclays' 6th demo in London in the last week. As with the AZ demo, all we were doing was holding placards and a banner and handing out leaflets. It was a very good place for a demonstration, with very busy streets and a lot of support from the public. A couple of people even talked about moving their accounts elsewhere. This demonstration was said by the coppers, and then by Inspector Watson, to be illegal under the Serious Organised Crime and Police Act (SOCPA) and we were ordered to stop the demonstration or get arrested. By this point we had actually demonstrated for about an hour and three quarters, so we packed-up and left. But what a disgusting country this is now! Handing out leaflets and holding banners without police permission and you're apparently involved in "serious organised crime." I hope these brainless police officers know that they are creating a terrible police state for their own sons and daughters where you have to get permission for everything you do.

In a civilised 'democratic' country you should not have to seek permission to demonstrate against anyone. There are already very many laws in place preventing and punishing disorder, but this is simply designed to quash freedom of protest. Why, also, should people in the kilometer around parliament get more "protection" than anywhere else in the country? It is a very worrying thought, but why would they start these draconian laws in central London if they didn't eventually wish to extend them to the whole country? Repeal SOCPA! Defy a police state!