But now they've decided to do something about it by arresting the writer of those lyrics and front man of the four piece band and they want to sending him to jail for four years because he is a "danger" to Cuban society. 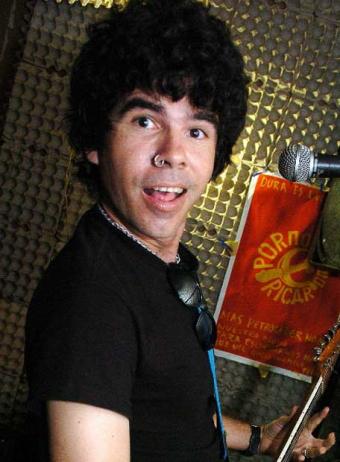 he doesn't even have proper punk hairstyle.

An interview with the band was published on IMC UK in June with the introduction "* The Cuban Libertarian Movement (MLC) interviewed via internet a punk musical group active in Havana for over 10 years who are today a significant reference in a counter cultural scene that merits recognition and solidarity."

But now they are notable.

& with certain irony for a pop group it's just about now that their website has instead of offering us clips, promos, gig listings and the hope of a t-shirt or signed photograph has instead offered nothing more than a "403 Permission Denied" message.

This isn't the first time that lead singer Gorki has had trouble with Cuban plod. In 2003 he was arrested after a gig under drug charges, which his supporters maintain were false. For him his is a voice which almost uniquely "has the bollox" to criticise the Cuban regime.

Gorki Aguila is 39 years of age & has been visited by his father according to Elizardo Sánchez of the Cuban council for Human Rights and National Reconciliation (CCDHRN) a group which has in turn argued that there is no legal basis for the charges and reiterated their hope that popular support will see those charges dropped. Accordingly an open letter from a cross section of 150 Cuban artists and musicians has been published and a petition has begun on line. The group CCDHRN are already pressurising for the release of an estimated 300 political prisoners.

It is hoped that members of the diplomatic and international community will attend the court hearings which will be in public. This possibility is heightened by renewed interest at least in Europe for the opening up market commidities to Cuban youth such as mobiles and the recent lifting of EU sanctions on the island.

Already the story of Gorki is provoking consternation in the Latin American press, the concept of an arrested punk musician whose lyrics might not have earned him a wikipedia page but are deemed dangerous to the Cuban state might interest people in the English speaking world who are bored of the Daily Mail's "don't grow up like Amy Whitehouse" campaign.

read the interview with them from June :-

& this story will be updated.