Two US B2 stealth bombers arrived at RAF Fairford at midnight on Monday 11th August and left on Friday 15th August. 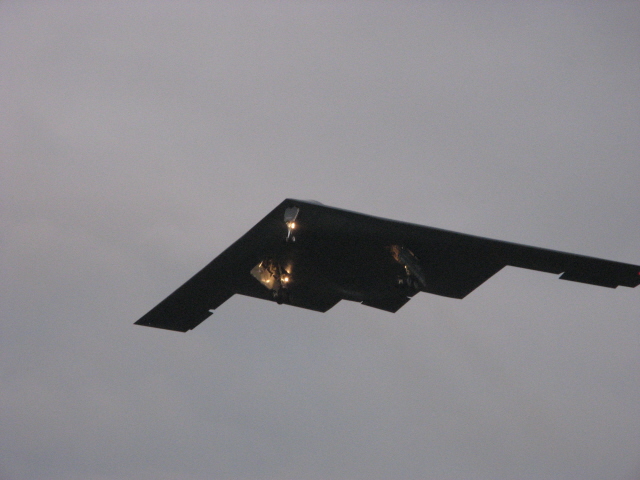 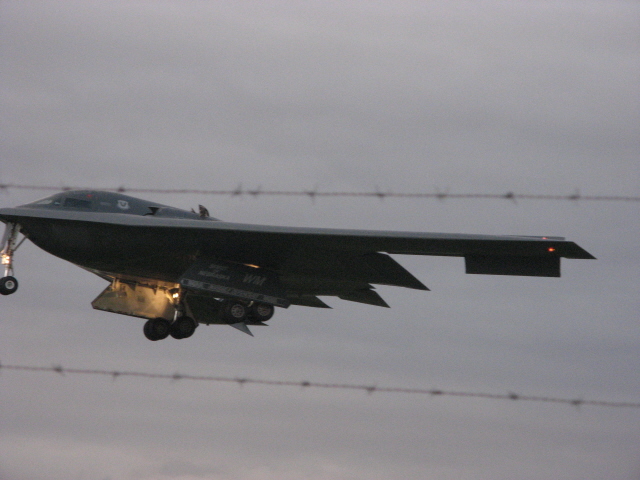 Following a call this evening (Wednesday 13th) from Jennie Chesterton of Faringdon Peace Group, who had heard from a local person that a B2 Stealth bomber was on the runway at RAF Fairford, Glos., we drove from Oxford to check out the situation.

A dozen or so plane spotters were gathered near the entrance to the bomb store on the road between Whelford and Kempsford. This is directly opposite the double B2 hanger on the base, and gives a very good view of the main runway and taxiways.

At approximately 8.00pm we saw the lights of a B2 stealth bomber slowly and quietly approaching from the East (Lechlade) and the plane flew low over the perimeter wire, above the runway and then pulled up into another circuit and returned, this time to land, halt, and then use the taxiway to return slowly past the hanger, and come to a halt, with engines slowly running. After about 20 minutes the engines stopped and a trailer pushed the bomber back into the hanger, with the doors closing afterwards.

There were also two US military planes, derivatives of Boeing 707s, parked near the hangers - we couldn't see whether they were the KC tanker aircraft or had some other support function. The B2 was followed in on the taxiway by a large yellow vehicle which went back into the fire station (two red fire engines also parked there).

The plane spotters had been around since Monday night when the B2s arrived from Whiteman US Air Force Base, Missouri, and had at last seen two B2s emerge, one from each hanger this morning. They also told us the follwing:

The first plane flew off for a practise bombing run to a North Sea bombing range, and returned with a bomb jammed in the bomb bay doors. It went along the taxiway on the opposiote (North) side of the base and police prevented the plane spotters from photographing it from that side.

It then taxied across to the large inflated rubberised and humidity controlled B2 hanger near the control tower and has been inside since then. This single hanger can be seen best from the Kempsford end of the base.

The second B2 emerged at 1.30 pm, started it's engines in preparation for take-off, but seemed to have a fault, and returned to the hanger. It eventually took off about 5.00pm and it was this plane that we saw return at 8.00pm..

The spotters said that they thought the planes would leave on Friday.

MOD police were patrolling inside and outside the base, and Gloucestershire Police had also been patrolling the outside roads. There had been an unmarked police car around in the day. Our group was photoed from a silver people carrier inside the base.

There were no escort fighters with the B2 this evening. Normally a B2 is accompanied by two fighter aircraft to confuse it's infra red signature and to assist radar identification.
The plane also spent some time circling in daylight, and lingering outside the hanger. Usually it operates in darkness and as discretely as possible, and we did wonder if this unusual action was deliberate, to assist satellite identification and to be rather obvious in these troubled times. On the other hand, it might all be a long planned normal practise bombing mission.

The planes left on Friday 15th.