Obama's Choice of Biden: "The Devil Made Me Do It."

Flip Wilson's comedic character "Geraldine" knew who to blame for her own indiscretions: "The Devil made me do it." The same goes for Barack Obama who, his
supporters are quick to explain, is blameless for his political sins and betrayals. The "white folks" made him do it, or "the polls" made him do it - but never the candidate, himself. However, it will be hard to find a devil to blame for Obama's choice of Sen. Joe Biden - "as much a war monger as George Bush" - as his running mate. The fact is, Obama "was never a progressive - he just briefly played one to win points in an Illinois
Democratic primary election six years ago." Let the Devil be. 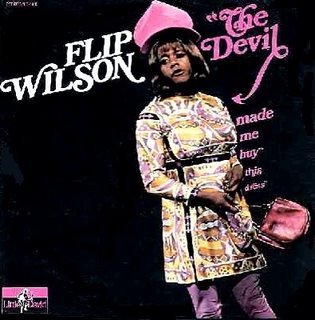 "Obama and Biden are quite compatible."

If I didn't know that Barack Obama has no African American blood relatives,
I'd swear he was related to Flip Wilson
[

http://en.wikipedia.org/wiki/Flip_Wilson]. The late, great comedian
(1933-1998) from Jersey City, New Jersey, invented the hilarious character
"Geraldine," whose signature excuse for wrongdoing was, "The Devil made me
do it." Of course, the devil had nothing to do with it; Geraldine just did
what came naturally, which was most often something devilish.

Apologists for Barack Obama - especially Black apologists - constantly
invoke the Geraldine Excuse to justify Obama's many sins against progressive
politics. Obama repudiates his longtime friend and pastor, Rev. Jeremiah
Wright, the liberation theologian. "He had to do it," Obama's boosters
declare. "The white folks demanded it!" - which is, in some Black circles,
the same as saying, "The Devil made him do it."

Apparently, the Devil then caused Obama to denounce his former friend, the
radical Chicago priest Father Michael Phlegler, for mocking Obama's then
opponent in the Democratic primaries, Hillary Clinton. Hillary Clinton must
be an acolyte of the Devil, herself, since she had earlier forced Obama to
denounce Min. Louis Farrakhan.

The Devil just won't leave poor Obama alone. Old Lucifer sets Obama's head
to spinning around and spewing out war threats against Iran and Pakistan,
and promising a much hotter war in Afghanistan. He vows by everything unholy
to deliver billions more dollars and nearly a hundred thousand more bodies
to the U.S. military, so as to ensure America's ability to fight several
wars, simultaneously. (The Devil loves it when he does that.)

"Old Lucifer sets Obama's head to spinning around and spewing out war
threats."

But now the Devil's gone too far - if it really was the Devil at work. Obama
has chosen Delaware Sen. Joe Biden as his running mate, a politician who, as
champion loudmouth and chairman of the Senate Foreign Relations Committee,
was calling for an invasion of Iraq in 1998, two years before there was a
President George W. Bush. In 2002, when Bush demanded Congress give him
powers to wage war against Iraq, Chairman Biden was Bush's biggest
Democratic ally. Biden depicted Bush as a man of peace, declaring, "at each
pivotal moment, he has chosen a course of moderation and deliberation." That
course led to a war that is now deep into its fifth year - but that should
not worry Joe Biden, who said, back in 2002, that the U.S. was "committing
to Iraq for the long haul; not just the day after, but the decade after...."

No sooner had the Iraqi resistance bogged down the Americans, than the
blow-hard Biden proposed the country be divided in three parts: Sunni, Shia
and Kurdish - a fundamental violation of international law, as was the
unilateral, unprovoked invasion, itself.

Joe Biden is as much a war monger as George Bush. And the Devil had nothing
to do with Obama choosing Biden as his running mate. Obama, like Flip
Wilson's Geraldine, is doing what comes naturally. He was never a
progressive - he just briefly played one to win points in an Illinois
Democratic primary election six years ago. Ever since, Obama has been
searching for his comfort zone, and moving steadily to the Right. Obama and
Biden are quite compatible. To the Devil with both of them.

BAR executive editor Glen Ford can be contacted at