Two Pakistan senators, one man and one woman, both close to the dreaded Inter Services Intelligence try to give a bad name to the Baluch nation fighting for independence from Pakistan. A request has been made to the Interpol to arrest the Senator Mir Israrullah Zehri for alleged killings. 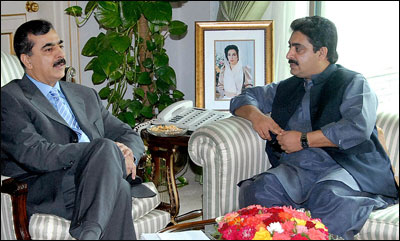 WASHINGTON DC: A demand has been made of the Interpol to arrest a key Pakistani senator who, along with his elder brother, is believed to have killed scores of their political opponents with the blessings of Pakistan's dreaded Inter Services Intelligence.

The senator in question, Mir Israrullah Zehri, a close buddy of ISI and Military Intelligence officials in Baluchistan, on an issue raised by a woman senator, said killing of women was part of Baluch tribal tradition.

The woman senator Yasmin Shah, who is also very close to the ISI, was earlier accused of sleeping with Pakistan's former dictator Gen. (Retd.) Pervez Musharraf.

The claim by the senator came on the same day The Guardian newspaper published a report that Pakistan's Military Intelligence was burning alive Baluch tribal activists opposing the loot and plunder of Baluchistan resources.

International human rights activist Peter Tatchell had exposed Pakistan Military Intelligence killing of four people in The Guardian newspaper on Friday in London. In Islamabad, Yasmin Shah raised the issue of killing of the girls upon which Senator Israrullah Zehri said such killings were part of the Baluch tribal traditions.

Many, even here in the U.S., saw through the Pakistani intelligence game.

"The fact that this 'news' originated from a 'Senator' who may be manipulated by powers other than those people who he is supposed to represent makes this entire 'news story' suspect," said Karl Stuart Kline, poet and author of two books dealing with human tragedy.

"To acknowledge this as a criminal act performed by individuals who operated outside law and custom is one thing.
To put up a weak pretense that this is a cultural norm makes it reflect on all Baloch and makes it an attack on the credibility of people who are seeking their own freedom by claiming that they won't allow freedom to others," Kline commented on a Yahoo group dicussion board called Balochi_Culture.

The Zehri brothers and their bodyguards are said to have executed not only their brother but hundreds of their political opponents with the blessings of Pakistan's ISI.

A key U.S. group the American Friends of Baluchistan strongly condemned Israrullah Zehri's statement that killing women who marry by choice is a Baluch tradition.

"This woman senator, Yasmin Shah, who raised the issue in the Senate, and her husband Syed Ali Baksh Shah alias Pappu Shah, always had very strong I.S.I. links. She has opposed any move to put the I.S.I. under civilian control," the AFB said.

Yasmin Shah vehemently opposed putting the ISI under civilian control. The move came on the eve of Pakistan prime minister Yousaf Raza Gillani's official visit to the U.S. but was thwarted within hours by Pakistan's powerful military.

"It was for this reason the home of Yasmin and Pappu Shah was burned down in Badin town in Sindh in the mass revolt that followed the assassination of twice-premier Benazir Bhutto," the AFB said.

The DC-based group demanded of international law enforcement agencies, including the Interpol, to look into the criminal background of Zehri and his two brothers Sardar Sanaullah Zehri and Mir Zafaraullah Zehri, both of who are provincial ministers, to see the number of poor people these three brothers might have killed in Baluchistan.

The AFB accused the Zehri brothers of selling Baluch tribal lands to the Punjabi-Mohajirs soldiers to build cantonments in Khuzdar. The hands of these 'touts,' who have been in the I.S.I.'s good books for many years now, are drenched with the blood of innocent Baluch civilians, both men and women.

"It's a shame that the Zehris, who have been in the good books of Pakistan's Inter Services Intelligence against the Baluch nationalist struggle, have tried to defend the burying alive of women in the Pakistan Senate," the AFB statement said.

The AFB said the shameful defense of a feudal and decadent practice "in the name of honor" is indefensible and must be condemned in the strongest possible terms.

The practise of killing women who marry by choice is occurring not only in Baluchistan, but also Sindh, Pashtunistan and feudal belts of the Punjab, Pakistan's interior minister Rahman Malik told the senate Monday. Embedded in the feudal tradition of denying women their due right in family inheritance, this decadent practice has been protected by the Pakistani occupation forces in Baluchistan.

"The reports of burying alive of women in Naseerabad by feudal lords close to the ruling Pakistan People's Party have been coupled by the burning alive of four Baluch by the Military Intelligence in Dera Bugti," the AFB said. "These two cases must be examined by the Interpol."

The AFB said that the continuation of this practice of killing of women in Baluchistan largely owes itself to the denial of basic human rights to the Baluch people by the occupation authorities of Pakistan army, who have stunted the social development of Baluchistan.

Baluchistan was an independent nation but has been kept in the chains of slavery by Pakistan since its occupation in March 1948. Today, the Baluch are not the masters of their own destiny.

"The days of burying alive women and burning alive of men in hot coal tar are numbered as Baluchistan will emerge as a free and liberal country on the world map soon. The Free World needs Baluchistan to be free in the real sense of the word," the AFB said.

The AFB requested the world media to have their facts straight and do their home work before going for sensationalism. "The five Ws--what, where, when,how many, etc-- must be satisfactorily answered before falling into the I.S.I.'s propaganda blitz against the Baluch people. The reports so far do not address the five Ws to the highest level of professionalism," the AFB said, urging Western corespondents to go deep into Baluchistan to dig out the real stories of gross human rights violations.

Just like its bid of tarnishing the image of Baluchistan, the I.S.I. is trying to give the entire West a bad name by its secret war against the International Security Force in Afghanistan and its defense of Aafia Siddiqui at the state level.