Late Thursday evening, Shell To Sea flotilla attempted to block the winch boat which has just arrived at Glengad. 11 small craft were launched from the Solidarity Camp. They strongly resisted the Gardaí and Navy boats who attempted to ram the Shell To Sea dinghies and knock the occupants into the sea. The resistance lasted for 2 hours and was cheered on by a huge local crowd who had gathered in support along the cliffs and beach. 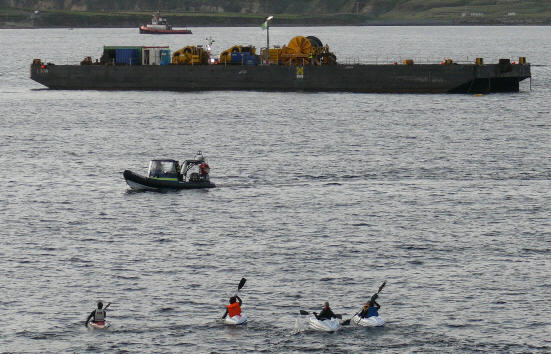 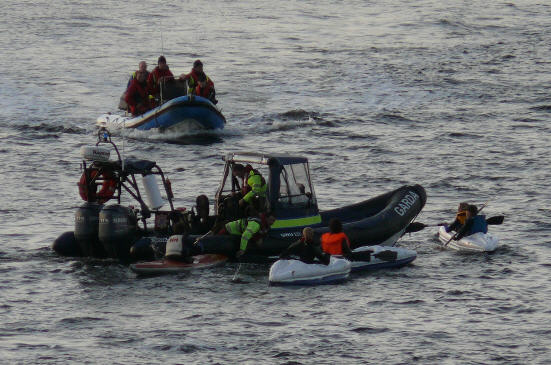 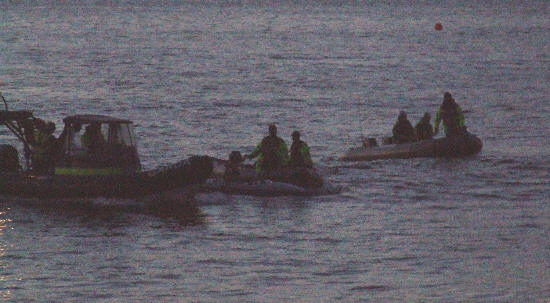 Yesterday evening at Glengad, eight Shell to Sea protestors were arrested for opposing the latest work being carried out by Shell. At approximately 7pm a barge began work pulling a winching cable into the landfall area at Glengad. This is one of the most crucial stages in the offshore pipeline that can be disrupted.

Three squadrons of Shell to Sea vessels took to the water to stop the work. They were opposed by fifteen Shell, Navy and Gardaí boats. Despite this the winching work was delayed for one and a half hours while Gardaí and Navy personnel worked with Shell security in arresting seven people from the water. Subsequently an eighth Shell to Sea protestor was arrested outside the gates of the compound under the Public Order Act. All have been released without charge.

During this action all of the S2S Fleet were rammed by Garda or Shell boats, with the exception of the S2S safety boat which was threatened with ramming by the Gardaí boats before she withdrew. All of Shell's 'safety' boats had Garda personnel on board and the Gardai, Navy and Shell worked togther throughout.

One of those arrested Mary Campbell stated "Despite being opposed by 9 Garda and Navy boats, we were still able to stop work for one and a half hours. Our community is taking on the might of both Shell and the State but the battle is far from over. We will continue to resist this project. There is no consent."

The Shell to Sea vessels seized by the Gardaí and Navy during the protest were The Niamh Cinn Óir, The Maedbh, The Michael Davitt, The Luke Kelly, The Ronnie Drew, The Robin Hood and The Hypatia.

At present, the winching operation is only part completed. It can't be predicted exactly when they will attempt to complete the work due to stormy weather conditions. Gales are forecast for the next few days. However, the work WILL happen as soon as the weather is fine. There is still time to get to Mayo! Check out www.coribsos.com for more info and www.rossportsolidaritycamp.110mb.com/ for travel and accomodation info