The BNP’s ‘RWB’ - Fascists Hide Behind Cops YET AGAIN!

From the forthcoming issue of the Antifa newsletter 'No Pasaran!' 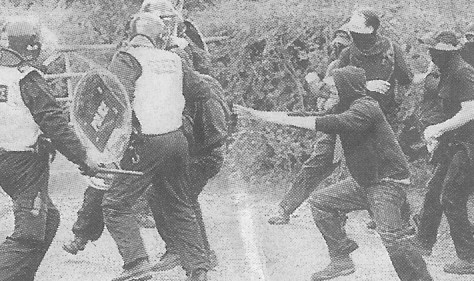 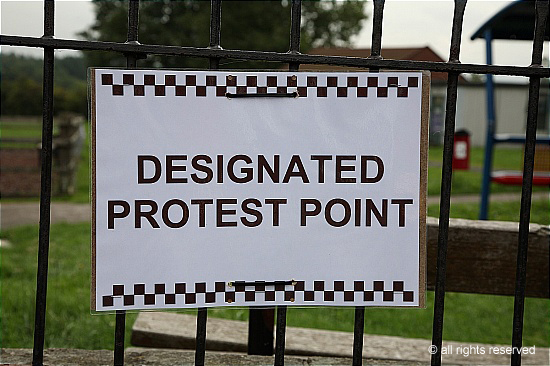 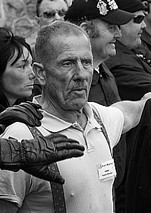 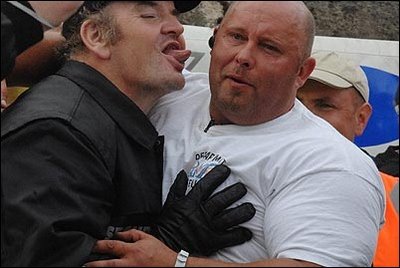 The British National Party’s annual ‘Red, White & Blue’ scumfest has seen very little opposition in the past. However, this year, the threat of militant antifascist opposition caused the BNP to be denied a music and drinks license for the event, and it only took place at all because of a huge police presence reminiscent of the National Front’s heyday in the 1970’s.

alan.warner@w3z.co.uk) Also, as previously, it was organised by David Shapcott, who lives far enough away at 6 The Spinney, Burnley, Lancashire, BB12 OPB (07871 029681) to be well out of earshot of the Nazi drinking songs and the drunken boorish antics, which, along with hardline fascist politics, are a stock feature of the RWB.

Local residents are not so lucky as Shapcott, and after last year’s event, when they were forced to put up with neo-Nazi thugs sieg-heiling their way around the village, screaming and shouting all night, and urinating in their gardens - even for weeks after the RWB was officially over - many locals vehemently opposed a repeat event. Unfortunately, their voices carried little clout with their BNP neighbour.

Antifa had been planning to oppose the RWB since last year, announcing our mobilisation in April, the first national antifascist organisation to do so. The threat of militant opposition, together with local protest, was the chief factor in the BNP having their music and drinks license for the event rejected.

Local protest to the RWB was co-ordinated under the umbrella of the nominally independent ‘Notts Stop The BNP’ group. Unfortunately, as the RWB loomed the usual suspects sold out any promise of taking a militant stance, irrespective of the agreements democratically made by the group’s membership.

Nationally, ‘Unite Against Fascism’, a front-group for the SWP, ignored the RWB, even in the face of calls for a mobilisation from some of their grassroots members, not least those within Notts Stop The BNP. Faced with Antifa’s call for a militant mobilisation and the growing likelihood of a well-attended demonstration which was out of their control however, the UAF leadership eventually moved to take charge of any liberal anti-racist opposition by calling for a demo 2 hours later than the one promoted by Notts Stop The BNP and the local residents.

While the two groups of Trots and liberals (and the undoubtedly well-meaning antifascists still suckered by the likes of the UAF) squabbled over the details of their tame protest/paper-selling opportunity, the cops and the BNP must have been laughing their socks off. Neither entity was laughing at the prospect of militant opposition to the RWB though. While the liberals cow-towed to the cops every request, which eventually resulted in a heavily restricted and ineffectual protest well out of ear-shot of the RWB, Antifa (of course) did not even bother to return the increasingly frantic calls from Derbyshire Police.

Soon after the BNP had their music and alcohol license rejected, scumbag Warner woke up to find his front gates chained and padlocked, and the entrance to his farm daubed with anti-BNP graffiti. This wasn’t the first visit to the farm by antifascists, on one occasion they had even ripped the England flag from the flag-pole in his front garden. Nor would it be the last visit, he was eventually reduced to begging the police for a ‘panic button’.

For the moment at least, Warner had little need to worry. Derbyshire police mobilised a huge police presence to protect the fascist scumfest, with numbers and expenditure unprecedented since the days when their forbears protected the equally cowardly National Front.

On Saturday 16th August, while the UAF/SWP sold papers to the antifascists they’d assisted the cops in penning-in, and while the UAF’s Weyman Bennett arrogantly pushed aside local anti-racists to hand pick the pitifully small contingent being allowed to march past the RWB site, militant antifascists went into the field. Barricades were built across roads leading to the RWB site, and despite brutal opposition from riot cops protecting the BNP, militant antifascists tried again and again to break through their lines to engage the fascists.

The BNP may now be trying to pretend that it was ‘business as usual’ at the RWB, and that they sat behind police lines feeling safe and secure, but that is far from the truth. The cops got so sick of hearing BNP ‘security’ chief Martin Reynold’s quavering voice, that they told him to stop calling them, and attendance at the RWB was undoubtedly down with only 75 cars in the site car-park. The massive publicity caused by the militant antifascist mobilisation has led to widespread calls for an end to the RWB, at least at the same site.

Despite this year’s events, and despite an increase in local opposition, Alan Warner is vehement that the event will go ahead on his land again next year. Whatever happens in the future, whether this fascist gathering is forced to move or not, the BNP can be sure that Antifa will be there to oppose them. And Warner, if you’re reading this, we suggest you keep on clutching your panic