BNP Training Kids in Weapons Use

A report in a national paper reveals that the BNP has been teaching kids as young as 12 how to shoot, use knives and make other weapons at its Hitler Youth camps. They are also taught how to deal with "Marxist teachers" like National Union of Teachers members. 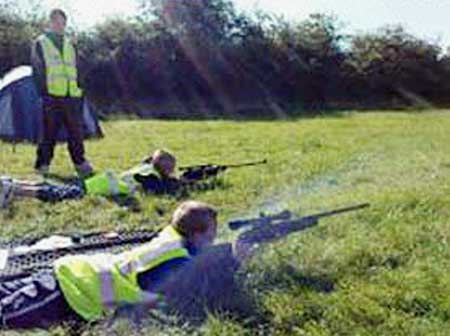 The Mirror reports that the first such camp was held at the controversial Red, White and Blue festival in Derbyshire last month. Mixed in with the race war training were sessions on "heritage and culture" and "nationalist politics" to make a complete fascist brainwashing package.

The lucky little hate-filled ones are then fast tracked into the party.

Now we know what the BNP mean by the RWB being a "family event". Training the SS of the future.

This article is so pathetic as to be laughable. You lot need to get out of bed, grow up, and face reality. Losers all.

Typical plod hypocrisy exposed here by the fact that the BNP boast that Young BNP members carry knives for making 'dutch arrows' (offensive weapons), but we hear nothing about them being confiscated, while knives being used for food preparation, construction of rafts, etc were removed from the Climate Camp and surrounding area...

I'm as antifascist as the next anarchist, but the way this piece is written is awful, and I don't think it's worthy of being reposted on Indymedia either. It's just typical Daily Mirror crap - so why bother!?

I mean, we learned how to shoot, use knives and construct makeshift weapons (how to sharpen a stick for hunting, how to make a snare trap and so on) when I was in the Scouts! We also did plenty of other stuff that our Scout leaders didn't know about - blowing things up on the campfire, various bouts of pyromania, beating the shit out of each other, you name it. All kinds of stuff that would probably ring major alarm bells and have the child psychologists crapping themselves these days, but was basically just kids running riot in the great outdoors, and doing the usual dangerous / irresponsible / mean things that some kids do.

Luckily, most people grow out of it as they get older, and live to regret the stupid things they did as a kid.

Now, while the Scouts obviously isn't the same as the BNP, there are plenty of other far more serious things we can condemn the fash for other than that they trained some kids to shoot and use knives on a campsite.

Presumably their intentions aren't good (eg. perhaps the idea is that the kids will one day shoot and stab "reds" and foreigners), but for all the really nasty shit that the fash get up to, reporting on stuff like this does indeed seem laughable and rather desperate.

So please, let's criticise them for being a bunch of racist, fascist, violent bastards, and dismantle their twisted worldview piece by piece, rather than stooping to lame tabloid sensationalism or pandering to whatever the yoof are being demonised for this week!

No sensationalism, pandering or embelishment is required - the reality of fascists and their politics is sufficiently bad enough!

Presumably this is the original article:

the fact they are training & are nazis also is important, well done to mirror &

to reposter for putting this on here, thanks hadnt seen this. Please ignore the moaning,cheers.
This is what we need papers to be doing, nothing wrong with abit of factual sensationalism, .22 air rifles highly sprung can kill large animals & people. Maybe they should be in the hands of a well regulated & trained true peoples volunteer army-"police" force to maintain cooperative mutual aid & order against all forms of terrorism & threats to a truelly endangered planet.
That said also most of British army isnt racist or fascist, especially compared to US marines, many soldiers wont murder on site & just want to do what good soldiering is about, defence!!!!!!
thats why "special" units like SS are given better weapons,privileges, rations by nazi governments& some oil companies still when the profit margin insists,scum!
We dont need nazis,marxist politburo dictatorships, corporate politburo dictatorshipsor violence,
We need peace,
If robots evolve they may try to easily kill us if we are nazi idiots, same said if "aliens" get here, thats if the idiots havent destroyed the planet by then.
PEACE

Green Syndicalist - what is that nonsense about volunteer? In a sensible Democracy you lose the vote if you are not armed and skilled in the use. There is then a reality to politics, your vote is backed by a bullet and the politicians prudently put their decisions to referendum. The country where they do that best has prospered and lived in peace for centuries,

Traitorous vermin in the form of Social Democrats want to put a stop to that and integrate their country into that fascist institution the European Union where the taxes on the thieving Rich are eased by the vicious unavoidable VAT that impoverishes the poorest.

In the nearest City to me, a senior Labour Politician is in cahoots with the assorted anti-fascists who make a great stink about the BNP. The resulting smoke screen entirely hides from the anti fascists that New Labour are building Global Fascism, They are all out trying to bash the BNP. None have bashed New Labour class traitors.

It is on the cards that the BNP is funded from the same source as the Gang of Four that split Labour to let Thatcher in. It would be funded as a distracting smokescreen for those who have sold out to Big Money to build Global Fascism.

About the Boy Scouts - It seems that Baden Powell was a socialist, what that meant in those days would probably be acceptable to most Indymedia readers,. Were the Scouts one of the first British organisations practicing race equality?

"I have never seen anything so irresponsible. Teaching young children to use knives and guns is reprehensible but it is what you expect from such a sick and twisted party."

- labour politician on the BNP.

I agree, but coming from Labour? talk about jumping on the anti-BNP bandwagon to come across as respectable. What about indoctrinating school kids into joining the army at a young age? - a Labour initiative, what about the Army Cadets Force - where kids as young as 12 learn to shoot guns. Fuckin hypocrites.