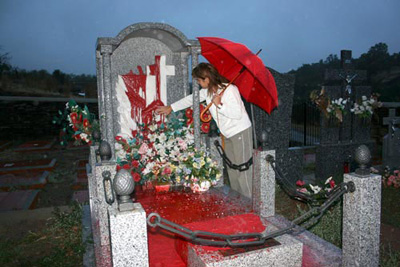 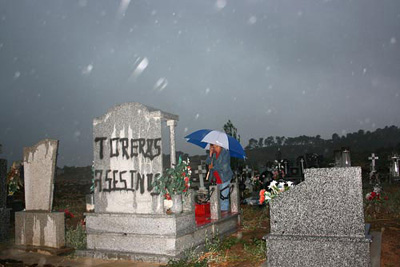 "Inspired by the recent liberations in Utah and British Columbia; we released between 100 and 150 mink from S&N Fur Farm (40499 Oupor Drive) in Scio, Oregon. Though thousands more mink remain imprisoned on this farm, crammed sometimes 6 and 7 at a time into filthy feces encrusted cages, at least some will have a chance at a free natural life. Also in the sheds of torture were the cages of furious foxes, yearning to be free, rattling their own cages with vengeance. This is our path through this chaotic and frustrating world. Our wisdom will appear to you long before we will. Till the last cage is empty, till all beings are free. ALF
Note** There is no security at this farm. Only the blaring sounds of 80's love ballads and country music over a loud speaker. Don't let that deter you."

"On the night of Thursday to Friday, September 5, in Ahigal de los Aceiteros (Salamanca), we entered the cemetery with care and respect for all except the tomb of an old serial murderer, Julio Robles.

During his lifetime Julio Robles was responsible for the slaughter of hundreds of brave bulls, who were humiliated, tortured and murdered without remorse. Despite this shameful past, he is remembered with honors with a statue at the entrance to the bullring in Salamanca.

Our intention was to dig up his corpse, but that proved impossible. Instead we took a 20kg bronze bust of the bull killer. It will be returned when the slaughter of bulls is ended. We also decorated his grave with red ink and several litres of paint of the same color, to remember the victims. Finally we wrote, 'bullfighters are murderers' on a large commemorative plaque.

We know that this small action will be met with harsh criticism. We find it paradoxical that attacking soil and a piece of marble triggers the wrath of many while the torture and murder of living beings that continues to take place in Spain is accepted as normal and respectable."

When night arrives and the rain falls the f.l.a. do what it is they most like to do, 'to cause headaches and economic damage to exploiters,' as well as to save the lives of animals.

We do not believe in special days to fight, for us every day is a day against McDonalds, a day for 'laboratory animals,' a 'day against bullfighting,' or a day against meat...

Last night, September 3, we attacked a branch of the filthy restaurant chain, 'Mesón Taurino' [The Bullfighting Tavern]; this chain, in addition to becoming rich from the corpses of animals, openly supports bullfighting. We poured a lot of red paint on its light-colored walls, on the door of the restaurant, on the signs advertising it, and on the photograph of a bullfighting murderer. We also painted the phrase, 'meat is murder' and symbols of the f.l.a…

Later that evening, in a spontaneous action, we sabotaged a meat industry truck. We poured enough red paint on the entire front part of this foul white-colored truck and we punctured a tire.

Actions speak for themselves.

"A trip to the White Crag Plantation on Rombalds moor, led to the discovery of a fully functional pheasant pen. The three small water distributors were sawn up, along with the connecting pipes. The main connector was placed out of commission and the large water butts were sliced into.
The pheasant feeders had their springs removed and the feed was spread around. The fencing had holes cut into it, and was then brought down around the perimeter. Pheasant feeders in the vicinity had their lids removed, and much of the feed was emptied out. Two large containers with feed inside had the bags opened and the feed was scattered. Two set fen traps were also found, released, and then disposed of.

This action is dedicated to the withdrawal of shooting rights on Ilkley moor, do the right thing and give the moor back to the people and to the wildlife that lives there.

"For many years cockfighting has been a tradition in Mexico, a tradition that demonstrates the complete domination of the human animal over the non-human animal, in clandestine places (which are not legal according to Mexican law) they make roosters fight until one is more or less dead, lying on the floor dying in a puddle of blood; before this humiliating and painful death they lived a life in jail, imprisoned in small cages watching life pass between bars and dirt.

These crimes against animals could not be left without a response. On September 2 radical activists for animal liberation visited the home of a breeder of roosters leaving a message on his property, 'stop killing animals!' and ALF, paint was spilled on his sign which read 'fighting cocks for rent;' now the sign is stained the color of blood and its entrance splattered, but this bastard not only profits from cockfighting but also has a restaurant where they cook chickens and rabbits, so its windows, walls and floors were also covered with paint.

"Portsmouth Greyhound track had it's locks glued
For the animals
ALF"