The Solitaire arrives in Broadhaven Bay

The world's largest pipe-laying vessel, The Solitaire, arrived off the coast of Mayo, Ireland, this evening. The Solitaire is installing the offshore section of the Corrib Gas pipeline for Shell. The ship is supported by a number of Shell support craft, the Irish Police Water Unit and part of the Irish Navy.Stiff opposition is expected, with a local school teacher already on hunger strike. Hundreds of police officers are in the area, and the main road to the beach has been closed. 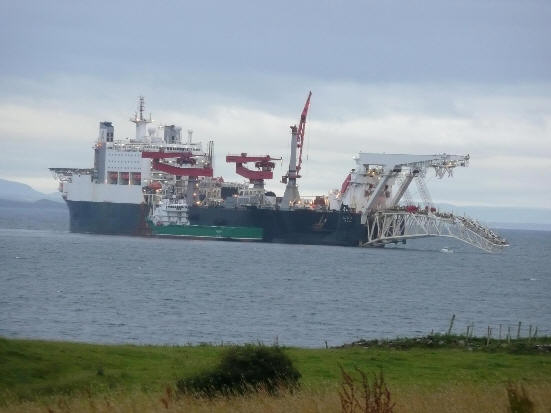 Local people have been alarmed to see so many police officers, and sinister figures in green rainjackets, who may be police (although the Irish Police, the Garda Siochána, usually wear blue) or could be Shell security or even members of the Irish Army.

Internet access in the area near the Shell compound has been cut off, and the main road to the beach has been blocked.

Opposition to the pipe laying operation consists of a number off environmental and political activists based in the Solidarity Camp, local fishermen who are worried about contamination of the waters they depend on, and many local people who are concerned that the offshore section of the Shell scheme is being put in place while no planning permission exists for the onshore section.

A local school principal has vowed to refuse food until the ship leaves the area. She has parked her car in front of the Shell compound. A fisherman from nearby Porturlin who refused to move his crab gear from the path of the Solitaire has been arrested.

In 2005 a number of local people were jailed for 94 days for opposing the Shell project as it was then configured.

Since then, the project has been dogged by controversy, with many arrests, court cases, injuries, complaints to the Garda Complaints Board and Ombudsman, and political activity both in and outside the Dáil.

In recent weeks there have been 29 separate arrests in thee area around Glengad beach, where the pipe is due to make landfall.

Shell spokespeople have claimed that the project has not been affected by the protests. They say that recent delays to the project have been caused by severe weather.

Some newspapers have claimed that the project, which is being carried out by a consortium of companies including Statoil from Norway and Marathon Oil from Texas in the United States, will benefit the country, even though all of the natural gas will belong to the Corrib partners and no royalty will be charged. There is no contractual obligation for Shell, the scheme's major shareholder and operator, to sell any of the gas to Bord Gáis Éireann, and so the resource will be sold to the highest bidder.

The will be no financial benefit to Irish consumers from the Corrib gas field.

Environmentalists have warned that the onshore section of the scheme, which includes a huge refinery being constructed nine kilometers inland at Bellanaboy, will be expanded and used to process gas from other fields off the west coast in the the future. They also say that Shell will use the precedent of an onshore refinery to strong arm their way into installing similar schemes in other places around the world.

The Irish government, including Green Party Ministers of the Environment and Natural Resources, has backed Shell's scheme. Last month the Garda released figures showing that 11 million euro had been spent policing the project since 2006, more than half the amount the force spent on fighting organised crime.

Activists on the ground in Mayo have asked for assistance. Those not in a position to travel to Mayo can hold solidarity protests (this article could be used as the basis for leaflets) at the Irish embassy or Shell petrol stations. Green Party politicians in Britain may have some influence over their counterparts in the Irish Green Party.