Dave Mahoney was cycling to the grocery store with his girlfriend in Minneapolis on September 4th 2008, when an un-marked van pulled up, and two men wearing FBI shirts inexplicably bundled him into the back, and drove off.

Dave was part of the protesters assembled at the Republican National Convention in the City that week, and was there to peacefully remind America and the rest of the world of some of the atrocities, and in-justices millions of people endure everyday across the globe - many of which link directly to the actions & policy of the Republican party.

Instead, Dave's become one of the victims... facing trumped up charges of Assault, and Conspiracy to Riot with a Furtherance of Terrorism; if convicted he could get up to 12 years in jail AND a $24,000 dollar fine... 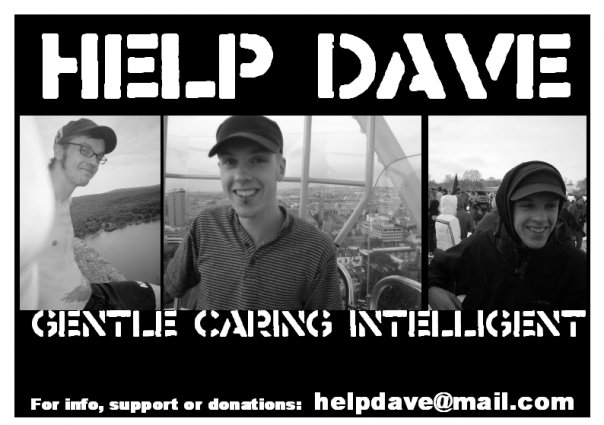 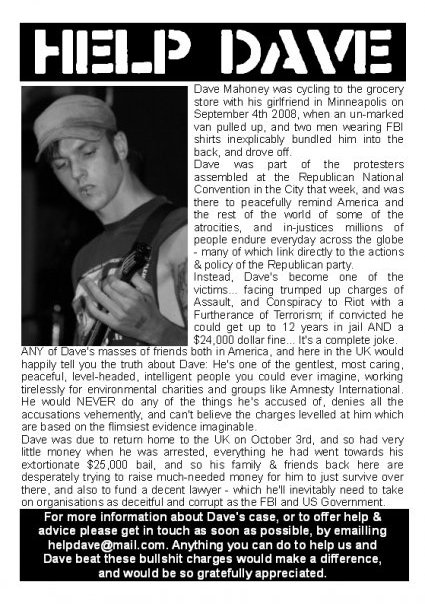 ANY of Dave's masses of friends both in America, and here in the UK would happily tell you the truth about Dave: He's one of the gentlest, most caring, peaceful, level-headed, intelligent people you could ever imagine, working tirelessly for environmental charities and groups like Amnesty International. He would NEVER do any of the things he's accused of, denies all the accusations vehemently, and can't believe the charges levelled at him which are based on the flimsiest evidence imaginable.

Dave was due to return home to the UK on October 3rd, and so had very little money when he was arrested, everything he had went towards his extortionate $25,000 bail, and so his family & friends back here are desperately trying to raise much-needed money for him to just survive over there, and also to fund a decent lawyer - which he'll inevitably need to take on organisations as deceitful and corrupt as the FBI and US Government.

For more information about Dave's case, or to offer help (financial or otherwise) & advice please get in touch as soon as possible, by emailling

helpdave@mail.com. Anything you can do to help us and Dave beat these bullshit charges would make a difference, and would be so gratefully appreciated.