On Mon 8th Sep the monthly picket of arms dealers Heckler & Koch took place at the entrance to Easter Park, Lenton. Locals wearing Heckle H&K T-shirts were joined by supporters from Brighton's Smash EDO campaign and enjoyed a great selection of tunes on the mobile sound system, as well as refreshments by Veggies.

The picket was the first since revelations that H&K weapons had found their way to Georgian special forces in South Ossetia, even though the country was at war. This was in spite of a German embargo on arms deals to Georgia.

Not many Nottingham residents are aware of it, but the city is home to a major multinational arms company. Heckler & Koch is the world's second-largest manufacturer of guns and grenade-launchers and they are based in Lenton NG7, not far from the University and QMC.

The arms trade fuels conflict and saps funds that should be spent on healthcare and education. In many countries, armed conflict prevents development and causes destruction, suffering and poverty. Small arms - the type of weapons made by H&K - are the true weapons of mass destruction: Each year, half a million people are killed by small arms, and another 1.5 million are wounded. Millions more have to flee their homes and become refugees to escape from small arms conflict.

The arms trade is inherently unethical: Legal loopholes, brokers and gunrunners make it easy to evade arms embargoes, and older weapons are often resold to countries with poor human rights. This is how Heckler & Koch weapons have come to be used by repressive regimes, terrorists, armed gangs and child soldiers around the world.

The campaign aims to spread awareness about what is going on behind H&K's closed doors and put pressure on the company to close its business. There are pickets of H&K's Easter Park site every 2nd Monday of the month at 4pm. See the campaign website for up to date information.

Unsurprisingly, given that H&K supply them with guns, the police have a very cosy relationship with the arms dealers. Since the campaign began, the company's site has been given very special protection. The regular pickets have been harassed by Metropolitan police Forward Intelligence Team photographers and Notts police evidence gatherers. People who rang H&K's (unmarked) doorbell were met by rapid response armed police and threatened with arrest under anti-terror legislation.

The police have been attempting to undermine the campaign from behind the scenes as well, at the request of H&K staff. When local mainstream media outlets have contacted H&K for comment on stories relating to the campaign, shortly after they have received contact from Nottinghamshire police telling them that it would be "irresponsible" to publicise the location of H&K's Nottingham premises. Those media outlets have often backed down from upsetting the police.

Given the numerous high profile murders with guns that have taken place in Nottingham over the past few years, you would imagine that there would be many community campaigns that might have an interest in shutting down dealers like H&K. However, the major organisations fighting gun crime get their funding from the police and are unlikely to bite the hand that feeds. It seems likely, though, that there are many Nottingham residents who would be allies in the fight against guns in the city, if only they knew what was happening on their doorsteps.

There are community-based anti-militarist campaigns in local cities that are linking up with the H&K campaign. In Derby, attention has focused on Rolls Royce's Raynesway factory, where the nuclear reactors for Britain's Trident submarines are made. Also, there is news of a Thales factory in Leicester, where unmanned drones are manufactured. These are surveillance aircraft, but there are plans to weaponise them in future. 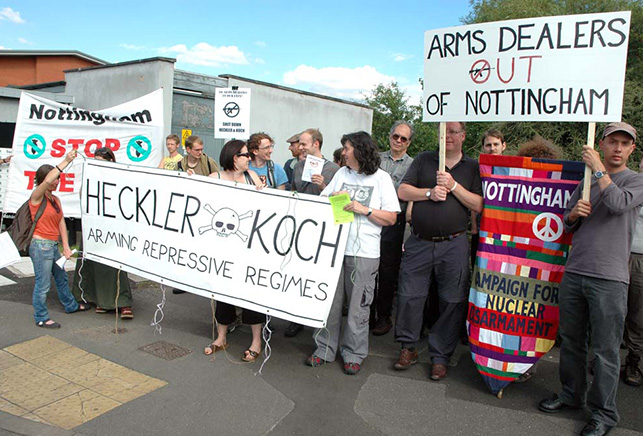 Join the demos to keep up the pressure against gun crime. All are welcome. Join us, and let’s shut down the arms dealers!

In the new year additional demonstrations or leafleting sessions will be held in the Market Square on 4th Thursday monthly, 12.30-2pm, from Thurs 22nd Jan.