We congratulate the Governing Body and the Head Teacher at Harborne Hill School for stopping Absolute Return for Kids (ARK), the controversial sponsors of the proposed Harborne Academy, from taking over their school. 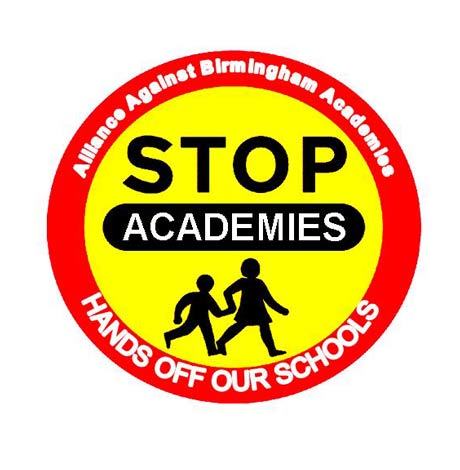 The Governing Body unanimously voted to stop ARK after it emerged that they were intent on destroying vital educational ties with local partnerships and organisations built up by the school over years. They were also shocked to find out that, despite Birmingham City Council saying that staff terms and conditions were ‘sacrosanct’, ARK refused to give any meaningful guarantees to their prospective employees.

The Alliance Against Birmingham Academies

Great news that Harborne Hill have put their foot down and said no to the march of the private profiteers! Education that is purely about minds and not money has to be fought for tooth and nail - as the Labour government has shown how desperately keen it is to let corporate goatsuckers into the playground and the classroom. Well done to the hard working, principled and determined campaigners who have stood in the way. Still time for St Albans to join them, and this decision will only help to make that more likely!

Congratulations! See this link for more information on ARK and their assocations