A small group of demonstrators handed out leaflets and held a picnic outside the Ministry of Justice in Westminster on Thursday 11 September 2008. This was the first of a planned series of monthly protests about civil liberties. Photographs (C) 2008, Peter Marshall, all rights reserved. 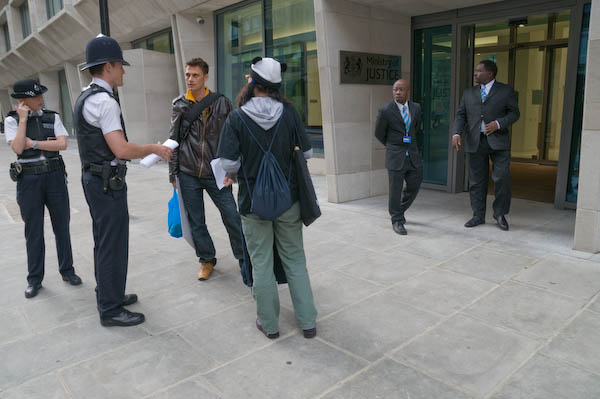 At the entrance to the Ministry of Justice 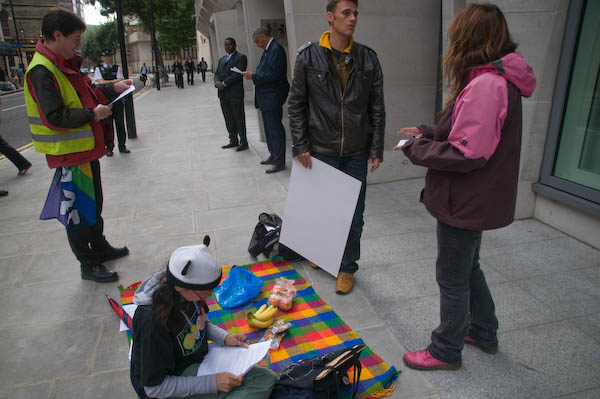 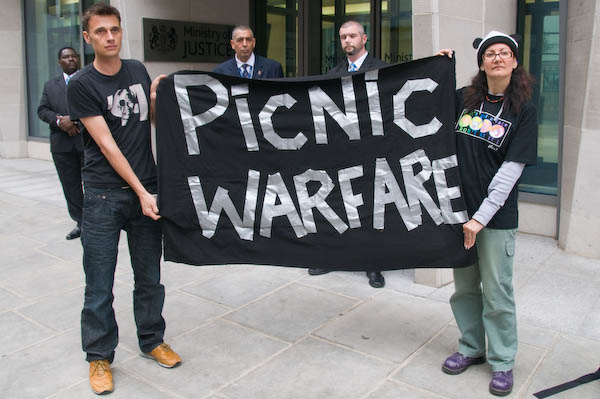 Picnic Warfare banner and security men at Ministry of Justice 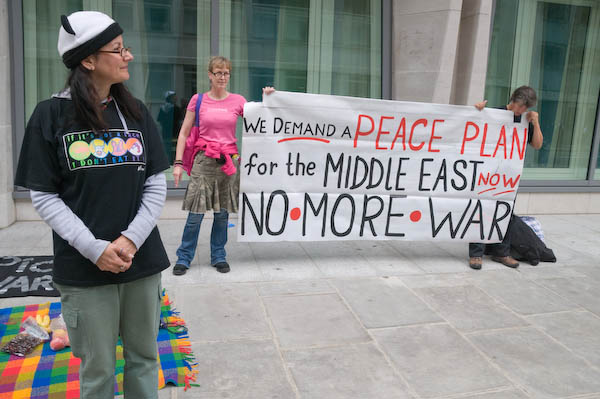 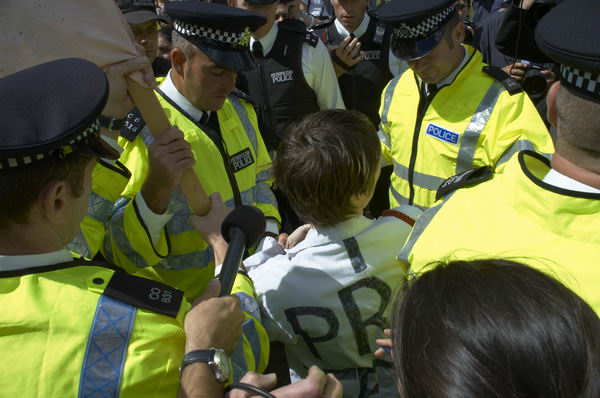 People in Common started in Aug 2005: Against SOCPA, Parliament Sq 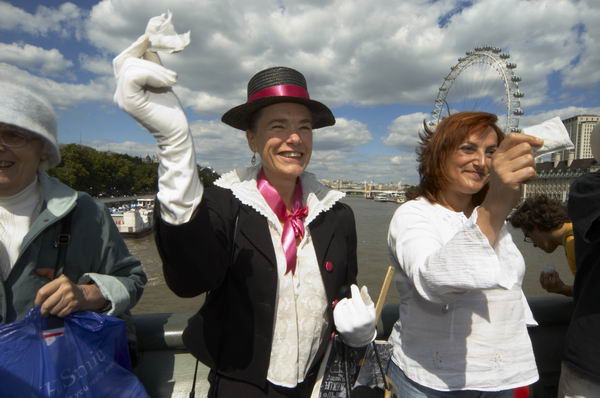 The Westminster Tea Party in August 2005 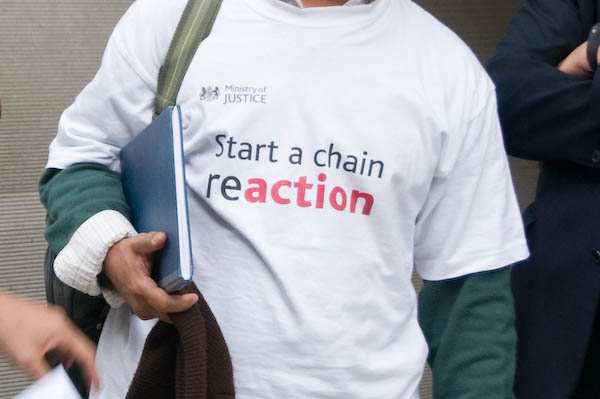 The protest, organised by Mark Barrett of 'People in Common' (

http://www.peopleincommon.org) called on the government and those working for the Ministry of Justice to end the abuse of power which is increasingly curtailing our freedom.

In particular the leaflet demanded the scrapping of plans for ID cards and a database state and an end to abuses of power such as the use of anti-terror law against peaceful protesters. It called for a repeal of the sections of SOCPA that outlaw peaceful demonstration, an end to the powers that enable local councils and other bodies to snoop on individuals and for an end to the Counter Terror Bill which will greatly increase powers to collect information on peoples' lives.

The protesters called for a new approach to civil liberties and human rights that will allow democracy to flourish, encouraging rather than treating those engaged in peaceful protest as dangerous terrorists.

The first response of the security guards at the Ministry was to tell the press photographers present that they were not allowed to take photographs! After some short discussions, the protest continued on the wide pavement outside the Ministry with both security and police taking a sensibly relaxed attitude for the hour or so I was there.

‘People in Common’ began on 7 August 2005, when some of the hundred or so protesters who met in Parliament Square to defy SOCPA and risk arrest continued onto Westminster Bridge to throw tea bags into the Thames in a further illegal protest, a 'Westminster Tea Party' against the untaxed international speculation in currencies.

People in Common intend to organise further protests calling for civil liberties on the 11th of each month. October 11 will be part of an international event - look out for details on Indymedia.

The following leaflet referred to in Peter's article above was distributed to a number of employees and passers-by at the Ministry of Justice and at the Home Office yesterday. It was also sent to Jack Straw and, thanks to his taking a fag break outside the HO, handed directly to Tom McNultyy. The call out for action on October 11th is at

Officers of the security state and others who support or profit
financially from the security economy, be on notice:

The UK, US & EU governments are intent on turning society into an
authoritarian police state-in-the-making. Not only is this morally
wrong and an abuse of power, it also directly prevents the very
openess and democratic processes necessary to build a good society. As
non-violent activists we feel this keenly, for we who campaign for a
just world now find ourselves forced to defend our essential political
freedom.

The restrictions on assembly, freedom to protest, rising surveillance
and encouragement of a 'snoop' culture, the removal of hard won rights
like habeus corpus and many other rights; these are totally
unacceptable in a democratic society. And those who support these
laws, whether as legislators, enforcers or apologists for the status
quo are collectively guilty of abuse of power and should be
prosecuted. Are you aware that our ancestors died for these
principles? We will not allow you to give them away!

We therefore hold you and all other relevant government bodies
responsible, including the Home Office, the Cabinet, police force and
local councils who crave ever-greater means of surveillance and
control over the populace. And we hold guilty those companies that
directly benefit from the selling of surveillance equipment or who are
inappropriately shielded from our democratic protest at their cruel
and dangerous activities. And we denounce the state that colludes with
these corporations.

We call upon you, good people within these organisations to end your
blind acceptance of these laws and the various wrong-headed doctrines
that support their enactment, including the war on terror. All
doctrines that encourage the notion we need a civil liberties
crackdown are false doctrines!

We demand that you
1 .Scrap ID cards & the proposed database state
2 Bring about strict punishment for abuse of power (like arresting
peaceful protesters under anti-terror law)
3) End council powers to snoop on its residents
4) Repeal SOCPA s132, 128, 145
5) Abort the Counter Terror Bill

And this is just the beginning! Stop the persecution of dissidents,
for these are the lifeblood of any democratic society. Recognise that
dissident actions, whether against state or other co-called
anti-social behaviour; these are usually born of necessity. They are
symptomatic: of perpetuated injustices, of the failure of economic and
political power structures to include everyone, of the need for a wide
debate, deliberation and inclusive legislative process about the
direction of society. Without justice, no peace! Protests and
anti-social behaviour reflect our collective failure to create a good
and authentically democratic society. Do you not see that we
dissidents are good , because we want a society in which all can have
their freedom to self-determination in solidarity with one another,
and not just a few? And the irony that we cannot possibly achieve this
by being demonized? Without a whole-scale reappraisal of how our
society operates, justice cannot be secured. But this is now
impossible under our vote and closed media/celebrity culture system
because those with power will not let the necessary, and serious ideas
into the mainstream. We are peaceful, but we can see why the terrorist
blows up a plane to get on the agenda, even if we disagree with means
and ends.

We demand the government adopts a new approach to dissidents. If not,
levels of terror, protest and general civil unrest will only grow.
Reinstate civil liberties and human rights for all, but at the same
time you must enlarge them. Open up the public sphere for peaceful
activists! We need a full debate in the mainstream media, so that the
views of non-violent, non-sectarian dissidents (those many radicals
now excluded from the coverage their causes deserve) can be heard, and
their ideas openly debated. For only then will demoracy have the
chance of fulfillment and the challenge of our times addressed. We
need open and ongoing, daily debate about how to use our freedom well,
about the way we organise society; about how our culture can bloom.
Facilitation of THESE things are what we need from public servants –
not Robocop! For it is through these means, and not through
authoritarian measures that peace will be possible. We will not let
the logic of the surveillance state continue!!