Letter of goodbye to Van Walsum

The ingenuous franqueza and the assumption relief of political conscience of the ex- personal representative of the Secretary General of Nations United for the Western Séhara, Peter Van Walsum 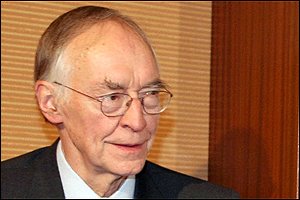 The ingenuous franqueza and the assumption relief of political conscience of the ex- personal representative of the Secretary General of Nations United for the Western Séhara, Peter Van Walsum, although affluent month it has been for Morocco, position that despué s of three years to hold the position decided to take because, according to é l, “if the Council (of Security) been had arranged to impose a solution (…)“, their anélisis had been different, it has taken to him to express as subjective opinions as contradictory that we have been ourselves forced to respond to the time that to ask, because it is so the tangle and the nonsense that one gets to think if its true intention I will not have been the one to confuse to which it does not know, to deceive which trusted their work and to still discredit month if it fits to the UN, criticizing the passivity to him of this organization when not applying to their own referring resolutions to the inalienable right of the town saharaui to their self-determination.

And it is that at this point of its life, and despu é s of to have discredited to itself and to have mancillado its prestige publicly with an own incoherence of a fécilmente manipulable novice, cannot justify its work swimming in turbulent waters while it recognizes that the legality is from the POLISARIO, that is to say, of the town saharaui, but that Morocco is implacable month and it is faldero dog of some permanent member in the Security Council.

By qué do not say you them things as they are? By qué it does not separate all that straw from its speech and it is centered in the certain thing? It is simple, Mr. Walsum, is enough with being centered in the main idea, in not unbalancing the truth, showing value to recognize what is of justice and, if no, in resigning with honor before being sold to the best postor. That, Mr. Walsum, is obtained with few words, with no need of explanations inopportunely; and by all means, with coherence and absolute clarity.

The “problem of the Séhara”, is not complex Mr. Walsum, although yes long, mainly for the town saharaui, that in these 33 years of exile has seen die to many of its children, to be born to others in earth that are not hers and are tired to listen people like you who say to them that “nothing I will change”. Because the things change, only coarse that one wants and the town saharaui wants. It wants to return to its home, it wants to return and to grow in the Earth of its ancestors, wants to live in freedom with a sovereign State and democrético, it wants to decide its future and that their rights like human beings and town with national identity are respected. And when a town wants, and it is known straight in its legitimate one, Mr. Walsum, I assure to him that nothing I will make him back down, reason why is an offense and a contempt to our town to insinuate that “if the POLISARIO resigned to total independence it would count on a great international support ". Qué part of everything what it has seen in these three years has understood? Because to date the countries are month of eighty that recognize the RASD (Arab Republic Saharaui Democrética), hundreds of associations in Spain and other so many in the rest of the world. The town saharaui, and therefore the POLISARIO, counts on a great international support in its pacific fight by total independence. No country of the world has allowed to admit the sovereignty of Morocco on the Western Séhara.

The conflict of the Séhara is not insoluble Mr. Walsum, which happens is that it is necessary value to admit that Morocco the International, of the Resolutions of the UN makes fun of of the Community, and that its proposal of autonomy, ademés of inadmissible, is not month that a cover in order to turn aside the attention of the serious violation of the human rights that the town saharaui in the Occupied Territories takes suffering from the Moroccan invasion and by which the Campings of Refugees exist and thousand of displaced ones saharauis in the world.

If the international instances lack executive force, as you declare, for the application of its resolutions, it is a problem added that affects to the town saharaui and to all the towns of the world; ademés of the extreme gravity that that means, by the defenselessness which we are ourselves exposed and the frustration before the work that would have to develop, that has like aim the préctica of his dictémenes. The weakness of United Nations exhausts, but it is not reason sufficient to waver before the genocida invader and to resign to our right to the free determination.

Morocco know very little of diplomacy and much of political prostitution, or what is the same, “real politique”. If it hopes that the town saharaui renders pleitesía to similar invading and criminal government, it is that the judgment is lost you or already has the retirement assured with the mansion that hopes to him in Ténger, in the same street in which is the one of Mr. Pé rez of Cué to llar.

The Saharaui town already has lost much, to the same has resigned and still it follows its fight with the best arms of those than it is possible to be arranged, the truth, the legality and its unshakeable desire to being an independent town and frees.

Certain that something must change: that the aggressor lets attack, who the invader gives back what he is not his and that the law distributes justice. We will already try that what comes does well.