Three targets, two demands, one noizy protest, all on a sunny London aftternoon in September.

For permission to copy and use, see 'CopyLeft' at the end of the story below the photos.
For links to the other sets of photos/videos, see one of the comments at the foot of this page. 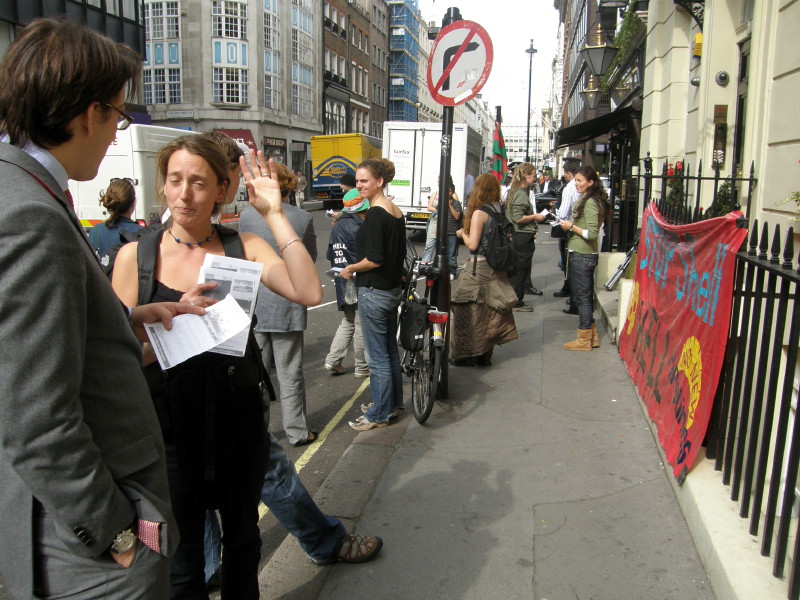 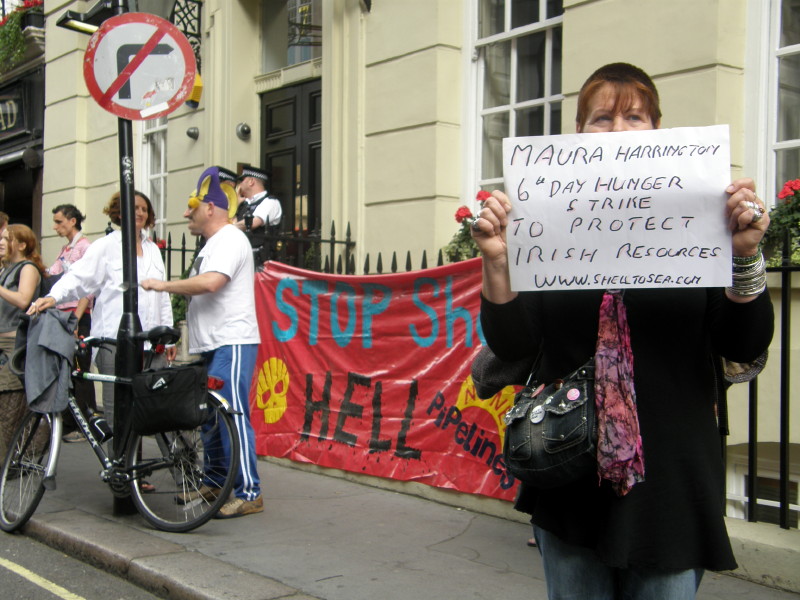 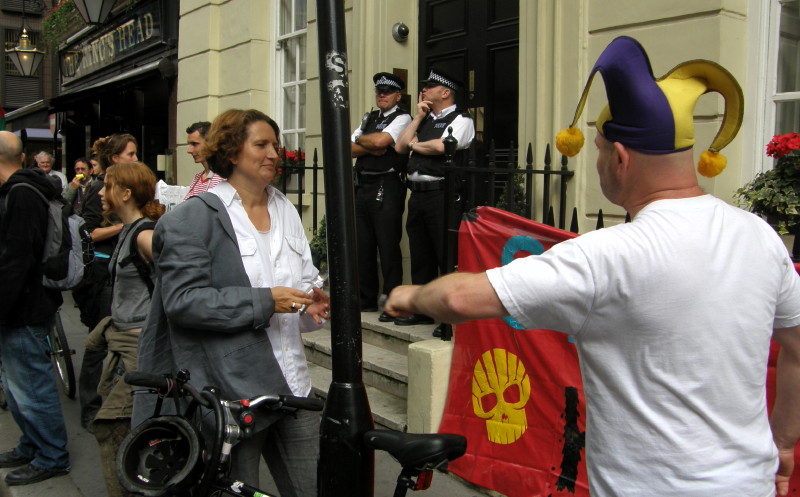 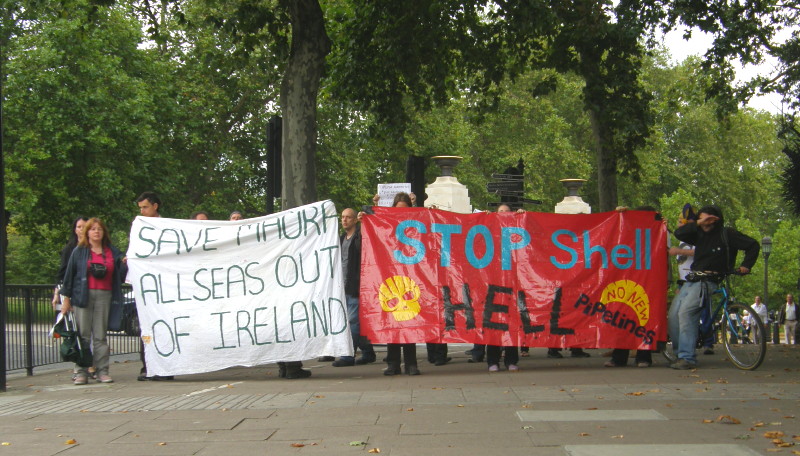 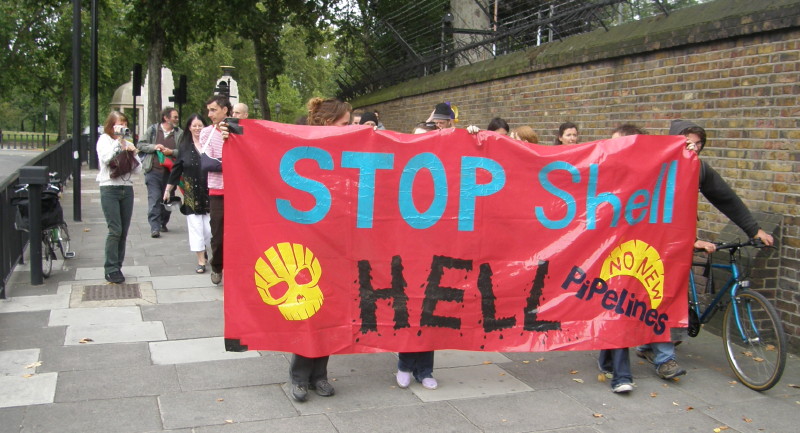 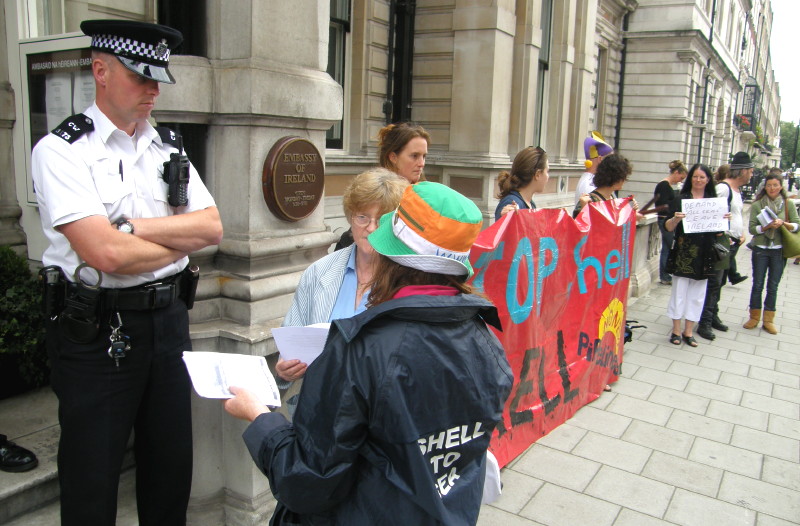 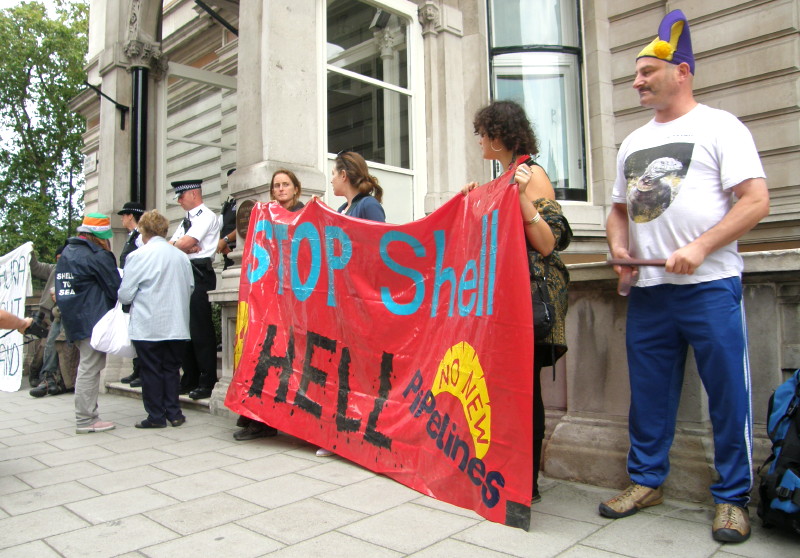 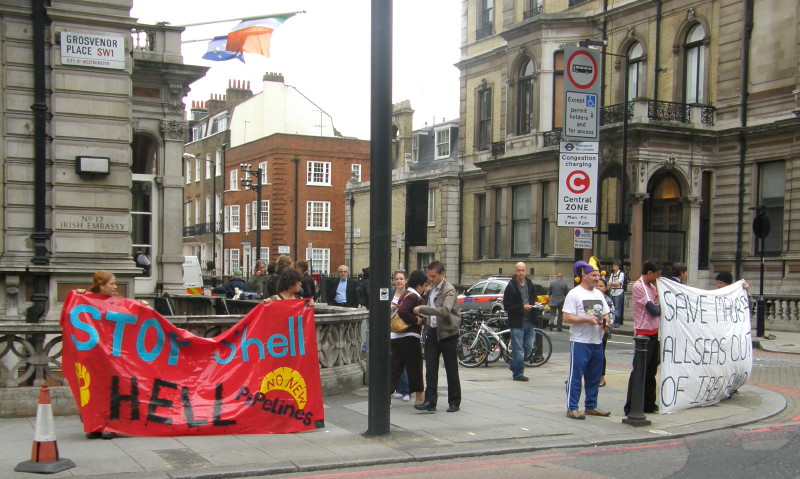 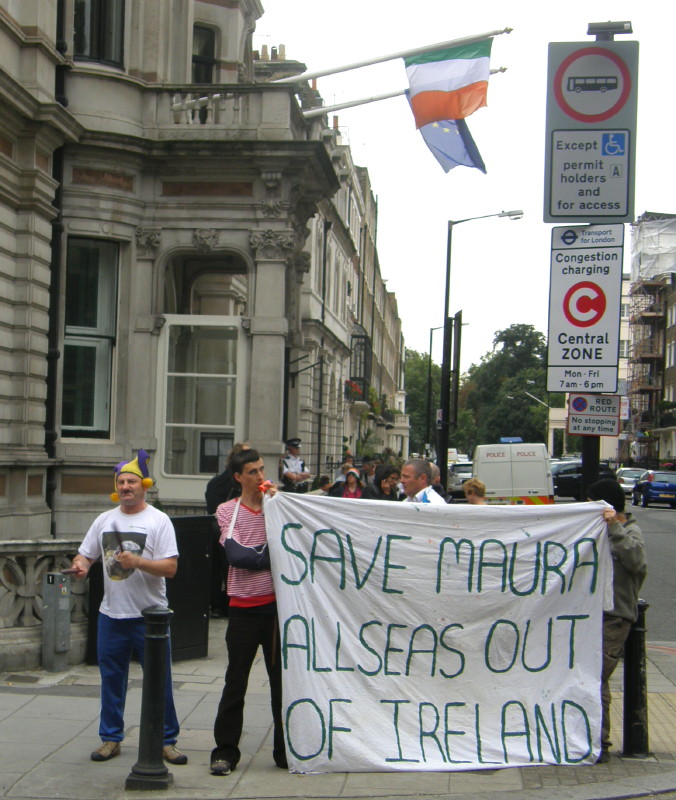 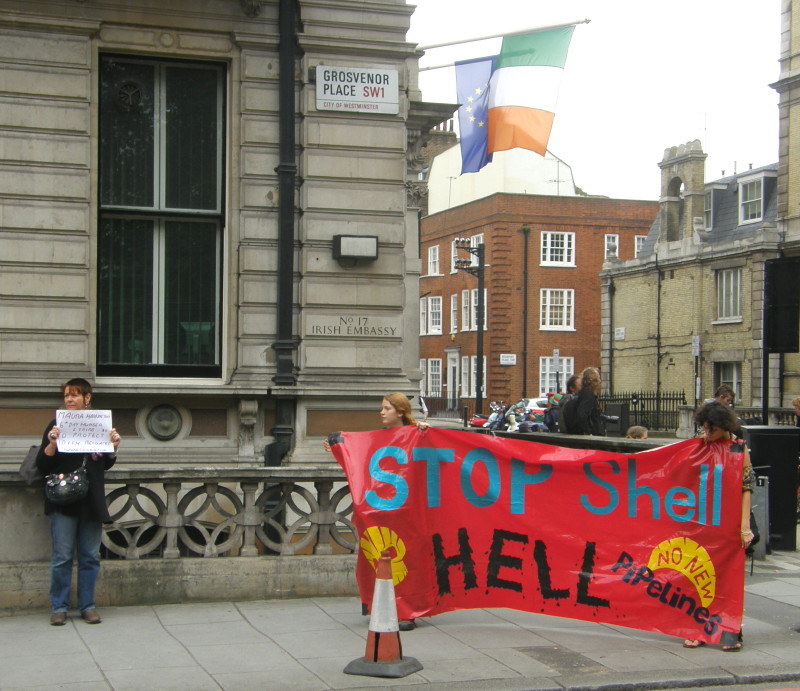 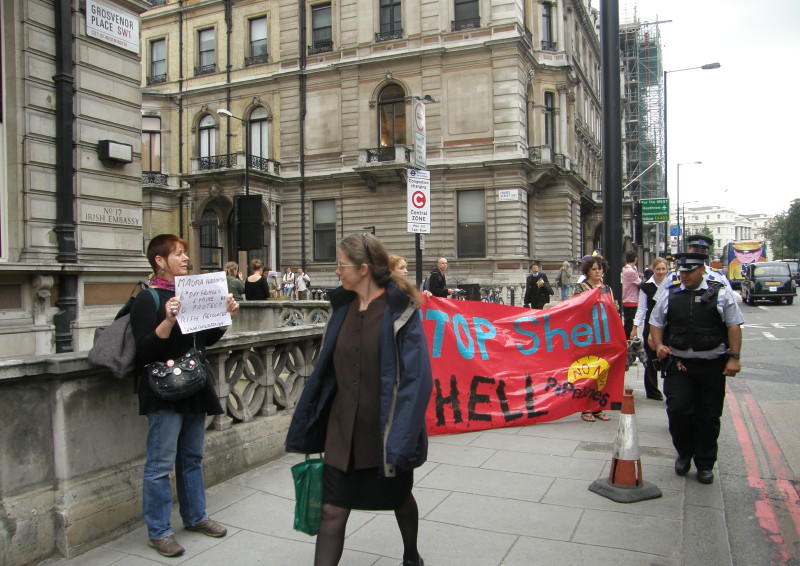 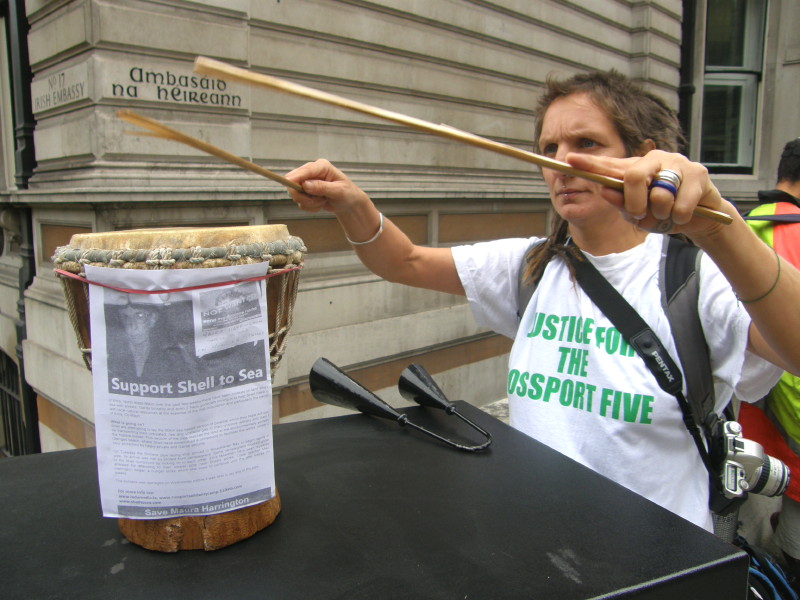 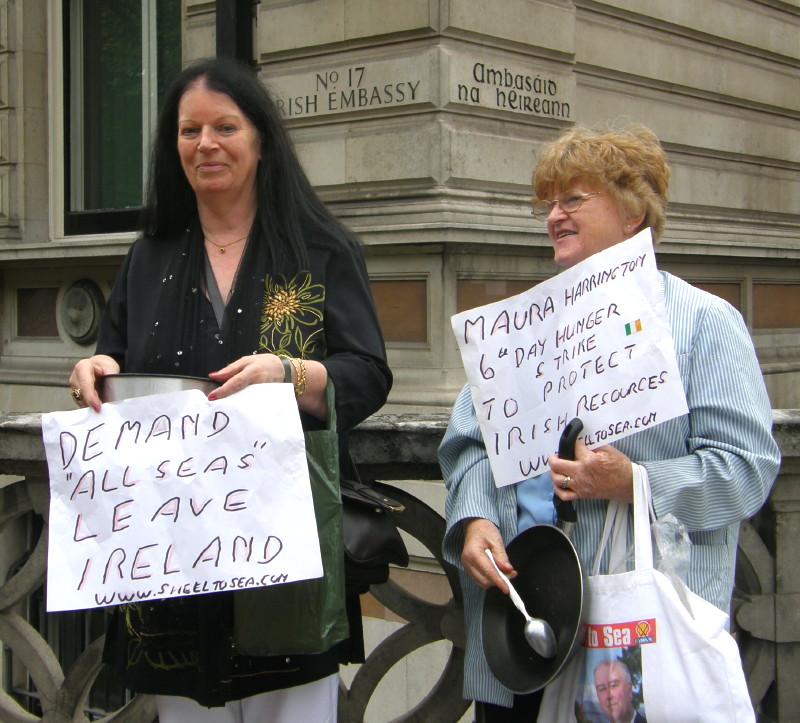 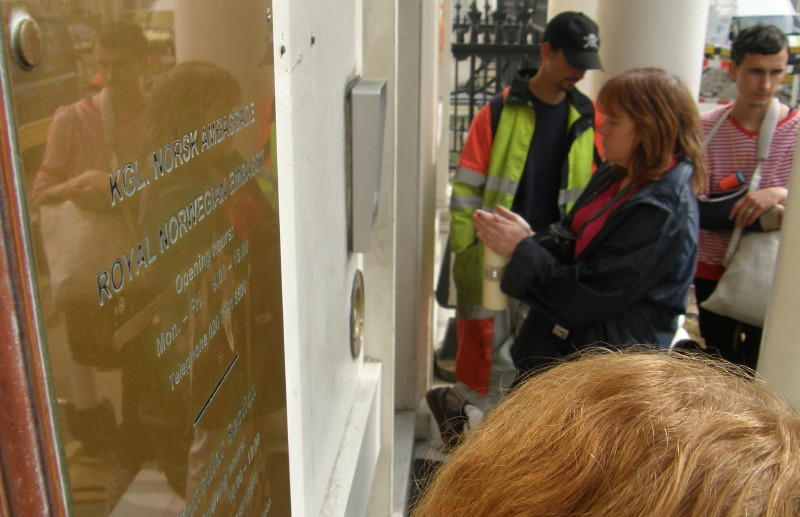 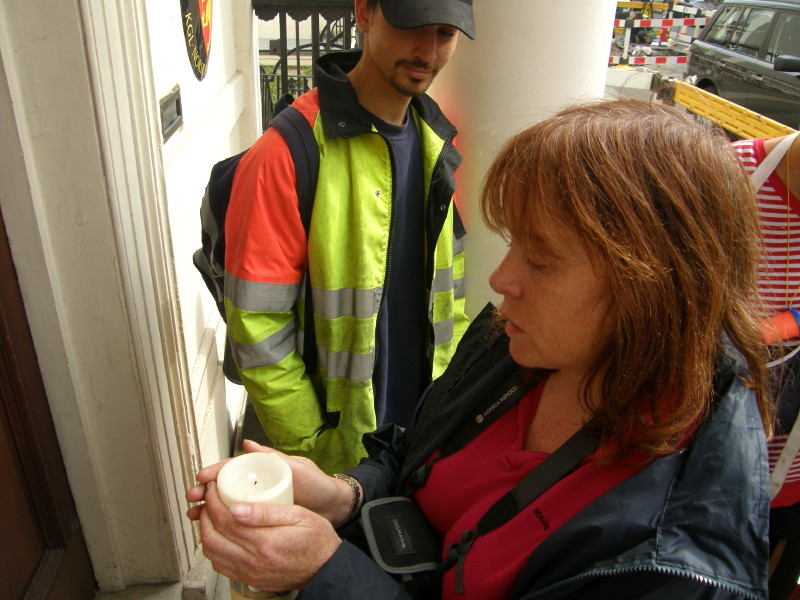 Allseas operate a gangantuan marine pipe-laying vessel called Solitaire, the largest of it's kind in the world (300m long, 420 crew). Big Oil juggernaut Shell have hired the ship to place pipe for 'em at Rossport, Co Mayo, Ireland. But the natives are revolting (tee-hee) - loving the green and pleasant land of Broadhaven Bay so, not wanting its natural beauty jeopardised by either gas pipeline construction, onshore refinery or human-induced global climate chaos, they're telling Shell and Allseas to "Feck Off!" And not only just the locals, or the Co Mayo (red and) green brigade, or the Irish environmental movement - Monday's International Solidarity Action filled the streets of London, UK with the noize [1] of citizens angry that the urgency of our global climate crisis is being ignored by business-as-usual planetary despoilers like Allseas.

And how do the operators of the Soliaire react to the challenge of facing their environmentalist critics on their office doorstep? Why by sending out a low-paid security man to try to persuade us that there was nobody from Allseas in the offive today! Methinks, like our pots-n-pans noize-makers, we had them severely rattled ;-)

When the Solitare entered Irish waters on Tue 09 Sep 08, a 54-year-old mother-of-four school principal drove her car to the compound gates of the Shell compound in Glengad in Erris with a hand-written sign in the window: "Maura Harrington / Shell To Sea / On Hunger Strike" - see

http://en.wikipedia.org/wiki/Maura_Harrington for a picture and more info.

"I'm here, at the end of eight years activism, because this is the place where I began getting interested in the diabolical proposal which Shell has for the place. We are damned if we are going to adopt the 'cop it and lie down' attitude which is expected of us – in other words, 'not to say anything, not to do anything'. What has brought me to this, is that because Broadhaven Bay is such a special place, it is worth fighting for, and, if necessary, it's worth dying for."
Maura Harrington
Hunger Strike Day #3 Interview - Shell to Sea Campaign, Thu 11 Sep 08
Video Source: Climate Camp London (provisional) wiki - Solidarity page -

• Address: 17 Grosvenor Place, London, SW1X 7HR
• Response: The classic 'Wall of Filth' approach - "Sure, haven't the Metropolitan Police got our backs on this, so let's just hide behind the cops till the rabble disperse"

The Irish 'Free' State is up to its teeth in complicty with Big Oil in backing the Corrib Gas Project with intimidation, brutality, and jailings:
• Granting planning permission - originally to Enterprise Oil (subsequently taken over by Shell) to build an onshore gas processing plant and to supply it using a high pressure pipeline
• Commissioning police brutality - by ordering police baton-charges against protesters, causing many injuries and some hospitalisations.
• Criminalising and jailing protesters - prosecuting the Rossport Five and jailing them for 94 days, for refusing to obey a temporary court injunction forbidding them to interfere with work being undertaken by Shell on their land; they were sent to jail on 29 Jun 05, by Justice Finnegan, President of the High Court of the Republic of Ireland.


"The government granted planning permission to Enterprise Oil (subsequently taken over by Shell) to build an onshore gas processing plant and to supply it using a high pressure pipeline which runs as close as seventy metres to the houses of some of these men.

The men were released from Cloverhill Prison on 30 September 2005, after 94 days, when Shell applied to the High Court to have the injunction lifted. This came after intense media and political scrutiny of the case."
Rossport Five -


"The Shell to Sea campaign vehemently opposes the current plans for the project, which it regards as dangerous. The level of opposition to the current configuration of the project has led to the refinery building site at Bellanaboy being the most heavily-guarded in Ireland, with scores of security working around the clock, assisted by sometimes hundreds of Gardaí.

In the autumn of 2006, Shell resumed work, enabled by An Garda Siochana baton-charging protesters. This violence caused many injuries and some hospitalisations. The threat of Garda violence resulted in a scaling-down of the protests."
Corrib gas project -


"We are the Shell to Sea network: concerned citizens from all walks of life who seek to draw attention to the planned Corrib gas project.

Shell to Sea is an international non-violent campaign, rooted in the Erris community. We seek to ensure the proposed Corrib gas terminal and pipeline are constructed offshore, as is best practice. In doing so we seek to highlight the negligent environmental, health, safety, planning and economic consequences of this government-backed plan. We are not the property of any party or movement and we disassociate ourselves from negative campaigning and tactics that many media outlets have attempted to associate us with. We have been campaigning for several years and continue to face intimidation, slander and significant hardship as a result. However, we are growing in strength, numbers and confidence. We will remain peaceful, committed and determined in the coming days, weeks months - and years if necessary!"
Shell To Sea network, website main page -

I suppose we should be grateful that at least the London rozzers didn't assault us with riot weapons! In fact the closest they came to emulating the disgusting, disgraceful behaviour of the Garda Siochana was to shoot us - with the cameras of a Forward Intelligence (sic) Team. Ahh, good old "Police Intelligence" - even more oxymoronic irony than the highly trained mass murderers in the Armed Forces executing "Humanitarian Peacekeeping" missions.


"The shits-in-suits dismissed us as a shower of bog-trotters when they moved in and that disdain will always stay with me. This campaign is ego-less and non-hierarchical. It's just the right side of obsessive. People don't veer away and take up some other issue. There's no dilettantism. My father was an egalitarian and so am I. Strong women are a feature of Erris."
Maura Harrington, Rossport Hunger Striker
Quoted by Justine McCarthy in 'Made in Mayo', www.village.ie, Wed 01 Nov 06 -

Nothing to add to that, really - I guess "Feck Off right now, and stayed Fecked Off Out Of It in perpetuity" would seem to be the gist of what we're getting at in this segment of the presentation ;-)


"We're tough, the Erris people. This is about preserving the integrity of this place that has been preserved for 5,000 years. That's attested to in its place names and its way of life. Those backing the pipeline say this is about progress but, when you're moving in a continuum, you don't move to anywhere other than where you are. That's the defining thing with the whole pipeline."
Maura Harrington, Rossport Hunger Striker
Quoted by Justine McCarthy in 'Made in Mayo', www.village.ie, Wed 01 Nov 06 -

The Norwegian State is wallowing in crude oil, owning as it does the majority of StatoilHydro, who wholly own Statoil Exploration (Ireland) Limited, who are Shell's junior partners (alongside third wheel Marathon International Petroleum Hibernia Limited) in exploiting the Corrib Gas Field.

"Statoil ASA has operations in over 30 countries around the world. Statoil Exploration Limited are wholly owned by Statoil ASA." [Even though Statoil ASA no longer exists, having been subsumed into StatoilHydro in 2007 when it was merged with the oil and gas division of Norsk Hydro - Dalinian]
Statoil in Ireland -

"Statoil ASA was a Norwegian petroleum company established in 1972, now part of StatoilHydro. Statoil was the largest petroleum company in the Nordic countries and Norway's largest company, employing over 25,000 people. While Statoil was listed on both the Oslo Stock Exchange and the New York Stock Exchange, the Norwegian state still held majority ownership, with 64%. The main office located in Norway's oil capital Stavanger. The name Statoil was a truncated form of the State's oil."
Statoil -

"The Norwegian Government, the biggest shareholder in both Statoil and Norsk Hydro, holds 62.5% of the company. Jens Stoltenberg, the Norwegian Prime Minister commented that he views the merger as "the start of a new era. We are creating a global energy company and strengthening Norway's oil and gas industry."
StatoilHydro Merger -

Possibly pooped from three hours of noize-making, agitation, shouting, leafletting, photography and videography, we arrived quietly at the Royal Norwegian Embassy. Our request to hand over a single burning candle, symbolising the life-and-death struggle of Maura Harrington, was met by the emergence of a middle-aged, red-tied, male diplomat - who listened politely, accepted our candle graciously, and paused for the cameras patiently - perhaps because he was hearing of this environmental conflict for the first time.

But on a personal human-to-human level, the contrast to the cowardly, contemptuous and contemptible response from Allseas and the Irish Embassy could not have been more stark. Let's hope that candle's gentle acceptance marks the beginning of a sea change for the Shell To Sea campaign of resistence, the ripples from which will grow to tsunami proportions before overwhelming Allseas, Shell, Statoil, Marathon, and the Irish and Norwegian States.

Maura and I are both old enough to count supporting the UK Miners' Strike 1984-5 as one of our finest achievements in grassroots political campaigning. I can tell her that, in the darkest days of all, when the British State - from all its loyalist bourgeios Labour/SDP/Liberal/Tory politicians via its naked police brutality to all its attack dogs in the press and broadcast media - was desperately trying to defeat organised workers on strike for them future security of their communities, then in the South Yorkshire coal fields at least, news of International Solidarity Actions were everything, the sweetest song that anyone could sing. Well, it's payback time, Maura - with much love, great respect and wholehearted support, from we Londoners to you.

As Dolores Ibárruri Gómez, Ernesto "Che" Guevara, and Gandalf the Grey would say when faced with apparently implacable, indefatigable hostiles ...


So if Maura, her children and comrades are feeling a little lonely, I hope these pix will go some way to reframing Ralf McTell's touching refrain:

"So how can you tell me you're lonely,
And say for you that the sun don't shine?
Let me take you by the hand and lead you through the streets of London
I'll show you something to make you change your mind"
Ralph McTell, Streets of London

http://www.youtube.com/watch?v=gBM-xGc-Vo4&feature=related
Cover version by Oasis (B-side to their 1996 #1 single "Don't Look Back in Anger") -

All these photos are 'CopyLeft'.
This means you are free to copy and distribute any of my photos you find here, under the following license:
> Creative Commons Attribution-Noncommercial-Share Alike 3.0 Unported License
>

I've uploaded six of the video clips I shot over the course of the process, which you can view by clicking on the links below.

Clip #5 – Outside Target #3: Norwegian Embassy – asking to hand in a symbolic candle

Clip #6 – Outside Target #3: Norwegian Embassy – handing over the symbolic candle to a Norwegian Diplomat

Many congratulations, and much love, great respect and wholehearted support, from we Londoners to you.