Bolivia and the Echoes of Allende: Morales Confronts the Insurrection

On September 11, 1973, the Chilean military staged a coup against president Salvador Allende. Like Allende, Bolivia's president Evo Morales is currently facing a powerful economic and political elite aligned with the United States that is bent on reversing the limited reforms he has been able to implement during his nearly three years in power. 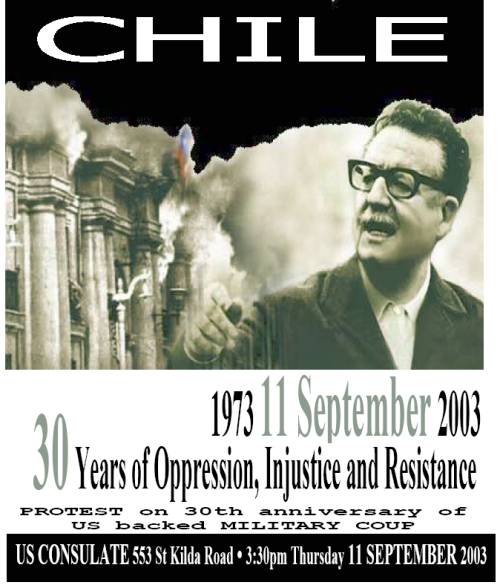 As Bolivia teeters on the brink of civil war, President Evo Morales staunchly maintains his commitment to constructing a popular democracy by working within the state institutions that brought him to power. The show down with the right wing is taking place against the backdrop of the thirty-fifth anniversary of the overthrow of Salvador Allende, the heroic if tragic president of Chile who believed that the formal democratic state he inherited could be peacefully transformed to usher in a socialist society.

Like Allende, Morales faces a powerful economic and political elite aligned with the United States that is bent on reversing the limited reforms he has been able to implement during his nearly three years in power. Early on, Morales--Bolivia’s first indigenous president--moved assertively to exert greater control over the natural gas and oil resources of the country, sharply increasing the hydro-carbon tax, and then using a large portion of this revenue to provide a universal pension to all those over sixty years old, most of whom live in poverty and are indigenous.

The self-proclaimed Civic Committees in Media Luna (Half Moon)--Bolivia’s four eastern departments--have orchestrated a rebellion against these changes, demanding departmental autonomy and control of the hydro-carbon revenues, as well as an end to agrarian reform and even control of the police forces. The Santa Cruz Civic Committee, dominated by agro-industrial interests, is supporting the Cruceño Youth Union (UJC), an affiliated group that acts as a para-military organization, seizing and fire bombing government offices, and attacking Indian and peasant organizations that dare to support the national government.

Morales’ efforts to transform the institutions of the country have focused on the popularly elected Constituent Assembly to draft a new constitution. The assembly was convened in mid 2006 with representatives from Morales’ political party, the Movement Towards Socialism (MAS) holding 54 percent of the seats. In the drafting of the new constitution, the right wing political parties, led by Podemos (We Can), insisted that a two-thirds vote was needed even for the working committees to approve the different sections of the constitution. When they were overruled and a new constitution was close to being approved in November, 2007, members of the assembly, including its indigenous president, Silvia Lazarte, were assaulted in the streets of Sucre, the old nineteenth century capital where the assembly was being held.

Using words that evoked Allende’s last stand in the Chilean presidential palace, Evo Morales declared “dead or alive, I will have a new constitution for the country.” He quartered the assembly in an old castle under military protection where it adopted a constitution that has to be approved in a national referendum. Labeling Morales a “dictator,” the civic committees and the departmental prefects (governors) of Media Luna were able to stall the vote on the referendum, and instead organized departmental referendums for autonomy in May of this year that were ruled unconstitutional by the National Electoral Council.

Taking recourse in democracy rather than force, and searching for a national consensus, Morales then held up the vote on the new constitution, and instead put his presidency on the line in a recall referendum in which his mandate as well as that of the prefects of the departments could be revoked. On August 10, voters went to the polls and Morales won a resounding 67 percent of the vote, receiving a majority of the ballots in 95 of the country’s 112 districts with even the Media Luna department of Pando voting in his favor.

However, the insurgent prefects also had their mandates renewed. Based on the illegal, departmental plebiscites held in May, they moved to take control of Santa Cruz, the richest department. UJC shock troops roamed the streets of the city and surrounding towns, attacking and repressing any opposition by local indigenous movements and MAS-allied forces. Not wanting to provoke an outright rebellion, Evo Morales did not deploy the army or use the local police, leaving the urban area under the effective control of the UJC.

Simultaneously, the right wing--led by the Santa Cruz Civic Committee--began sewing economic instability, seeking to destabilize the Morales government much like the CIA-backed opposition did in Chile against Salvador Allende in the early 1970s. As in Chile, the rural business elites and allied truckers engaged in “strikes,” withholding or refusing to ship produce to the urban markets in the western Andes where the Indian population is concentrated, while selling commodities on the black market at high prices. The Confederation of Private Businesses of Bolivia called for a national producers’ shutdown if the government refused “to change its economic policies.”

The social movements allied with the government have mobilized against this right wing offensive. In the Media Luna, a union coalition of indigenous peoples and peasants campaigned against voting in the autonomy referendums, and have taken on the bands of the UJC as they try to intimidate and terrorize people. In the Andean highlands, the social movements descended on the capital La Paz in demonstrations backing the Morales’ government, including a large mobilization in June that stormed the American embassy because of its support for the right wing. In July, the federation of coca growers in the Chapare, where US anti-drug operations are centered, expelled the US Agency for International Development.

This past week the Civic Committees stepped up their efforts to take control of the Media Luna departments. In Santa Cruz on September 8, crowds of youth lead by the UJC seized government offices, including the land reform office, the tax office, state TV studios, the nationalized telephone company Entel, and set fire to the offices of a non-governmental human rights organization that promotes indigenous rights and provides legal advice. The military police, who had been dispatched to protect many of these offices, were forced to retreat, at times experiencing bloody blows that they were forbidden from responding to due to standing orders from La Paz not to use their weapons. The commanding general of the military police, while angrily denouncing the violent demonstrators, said that the military could take no action unless Evo Morales signed a degree authorizing the use of firearms.

What was in effect occurring was a struggle between Morales and the military over who would assume ultimate responsibility for the fighting and deaths that would ensue with a military intervention in Media Luna. The armed forces do not support the autonomous rebellion because it threatens the geographic integrity of the Bolivian nation. Yet they are reluctant to intervene because under past governments, when they fired on and killed demonstrators in the streets of La Paz, they were blamed for the bloodshed.

On September 10, as violence intensified throughout Media Luna, Evo Morales expelled US ambassador Philip Goldberg for “conspiring against democracy.” The month before, Goldberg had met with the prefect of Santa Cruz, Ruben Costas, who subsequently declared himself “governor” of the autonomous department and ordered the formal take over of government offices--including those collecting tax revenues. Costas is the principal leader of the rebellious prefects, and the main antagonist of Evo Morales.

September 11, the 35th anniversary of the coup against Allende, was the bloodiest day in the escalating conflict. In the Media Luna department of Pando, a para-military band with machine guns attacked the Indian community of El Porvenir, near the departmental capital of El Cobija, resulting in the death of at least 28 people. In a separate action, three policemen were kidnapped. The Red Ponchos, an official militia reserve unit of Indians loyal to Evo Morales, mobilized its forces to help the indigenous communities organize their self defense.

The next day Morales declared a state of siege in Pando and dispatched the army to move on Cobija and to retake its airport that had been occupied by right wing forces. Army units are also being sent to guard the natural gas oleoducts, one of which had been seized by the UJC, cutting the flow of gas to neighboring Brazil and Argentina. General Luis Trigo Antelo, the commander in chief of the Bolivian Armed Forces declared: “We will not tolerate any more actions by radical groups that are provoking a confrontation among Bolivians, causing pain and suffering and threatening the national security.” In signing the order authorizing the use of force in Pando, Morales stated that he felt responsible for the humiliation of the military and the police by radicals and vandals because he had not authorized them to use their weapons. This was the quid pro quo for getting the military high command to act.

After sustained fighting with at least three dead, the army took control of the airport and moved on the city. An order for the arrest of the prefect of Pando was issued for refusing to recognize the state of siege and for being responsible for the massacre in El Porvenir. In Santa Cruz, the police arrested 8 rioters of the UJC. Peasant organizations have announced they will march on the city to retake control of the government offices. The dissident prefects, led by Costas, are still demanding departmental autonomy and refusing to accept a national vote on the referendum for the new constitution.

Evo Morales refuses to back down, declaring in a meeting with supportive union leaders, “we will launch a campaign to approve the new constitution.” He did, however, indicate he may modify the draft to accommodate some of the demands for autonomy by the prefects. Like Allende, Morales continues to search for a democratic solution to the crisis in his country. For the moment, he has the backing of the Bolivian armed forces along with overwhelming popular support, thereby avoiding the ultimate fate of the Chilean president.

* Roger Burbach is Director of the Center for the Study of the Americas (CENSA) based in Berkeley, CA. He has written extensively on Latin America and is the author of “The Pinochet Affair: State Terrorism and Global Justice.”