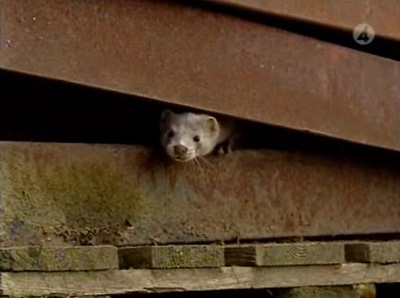 According to media reports, approx. 7000 mink were freed from cages at Lodder’s Mink Farm in Kaysville (Farmington), Utah early on September 21.

"On a cold and cloudy night, we again visited meat markets in Mexico State; this time 25 establishments were glued.

We exist and we are alive so that they won't be forgetten.

That's right we are back to work.
An incendiary device was left under a van in Acton, CA in the first hours of Thursday, Sept. 18th.
Let's hope it worked as well as the one in Irvine.

Let's also hope that the UCLA regents make some good choices so that we don't have to keep doing this. We don't want to have to go further with but be assured that we will if need be. Vivisectors we will be coming for you.

"On the night to September 16, activists from Djurens Befrielsefront (DBF) in Sweden managed to make a new way into Akes fur farm in Skara, an area with many fur farms. A big hole was cut in the main gate and friends of the animals got in there and into the sheds where the mink were held captive, 3 mink in every little cage. The big hole was soon followed with about 100 small holes in the fence. Several hundred breeding cards were stolen.
One of eight sheds were emptied and a total of 1200 mink set free. Only a few minutes after the first cage was opened, the activists witnessed how one mink was already on the other side of the fence, at a nearby river.
The animal lovers followed the mink into the forest and to their freedom where they will continue to follow their natural instincts - to raid Swedens fur farms, one after another. - DBF"

"A pet shop in the UK Midlands selling skunks, rabbits and chinchillas received a midnight lesson in animal freedom....till all are free!
PS: Sorry for writing FUCKIN SHUT BY ORDERS OF ALF in red paint - we should learn to spell ;)
TAAF!"

"During a DHL delivery in the west, the vans back door lock was super glued as a worker sat inside completing paperwork. HLS associates have nowhere to hide - ALF"