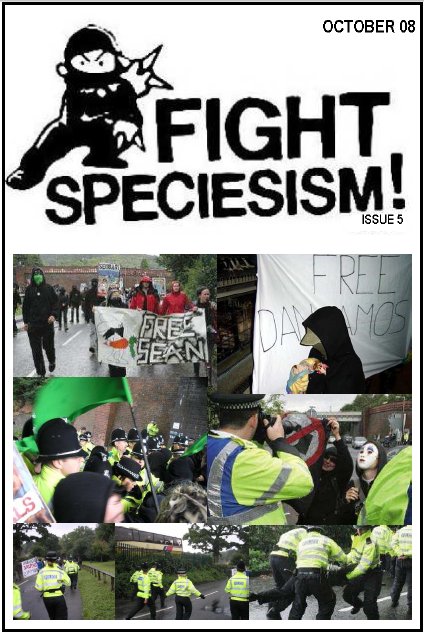 'We are opposed to capitalism and the state, understanding that without both entities, the universal exploitation of animals would not be possible'.

Does this mean that people didn't eat animals or put them to work before the emergence of States or the later capitalism system?

Depends which way you look at it

Without capitalism and the state; slavery, racism, sexism, homophobia and other forms of discrimination wouldn't of been upheld for so long, or even at all!

Given that the ALF and grassroots activists have been working hard since 1976 to eliminate animal abuse, the collective are questioning whether the universal exploitation would still be present today given that state and its capitalist forces didn't repress the succeeding movement and continue to do so.

It's a good question, one that deserves thought and debate. Through this we can realise how much the government and its departments are working to slow down the movement. In this day and age with a lively antispeciesist resistance, I think the answer is an obvious truth.

Steggles, a company which breeds chickens, kills and sells the meat for profit is going down economically in Victoria. Breeding farms are closing down in that state.

The only way that chiken-meat sellers can sell such a revolting taste product is to cover it with spices and artificial flavours. Chicken meat is the most repulsive tasting smelling meat product of all. Vendors of this product should be shown no mercy as they inflict death on creatures that are beneficial to the environment in so many ways.

It is difficult not to vomit when seeing adults and children tearing greasy, bloody, chicken meat to pieces and stuffing it into their gloating gobs. The sooner chicken eaters meet the same fate as their victims the better.

"Given that the ALF and grassroots activists have been working hard since 1976 to eliminate animal abuse, the collective are questioning whether the universal exploitation would still be present today given that state and its capitalist forces didn't repress the succeeding movement and continue to do so."

Which collective?
So the state didn't repress the animal rights movement?
What?
Eh?
In English please.

What Is New Welfarism and What does it really mean?

There is, in my humble opinion, a common misunderstanding of what exactly a "New Welfarist" is and what "New Welfarism" actually constitutes....Could the "collective" share their thoughts on the following articles which comprise a discourse between Martin Balluch and Gary Francione regarding what exactly New Welfarism is:

The "collective" appears to ascribe to a very "Francione" view point regarding "New Welfarism" by "adhering" to Abolitionist Manifesto parts 1-3....However such "New Welfarism" is never clearly identified as "this is 'New Welfarism', this is 'Abolition'"

Balluch makes a good case that humans are social creatures who defy rationale, and therefore more psychological methods are needed to be employed in order to achieve social change leading to Abolition....Yet these methods are often scorned as "New Welfarism" because, as Balluch points out in his Comment to Francione's response, Francione seems to be completely blinkered in his view of the strategies required to achieve abolition as a progressive movement.

Martin Balluch shows these examples of what his group has achieved in 10 years of campaigning using the strategies he proposes....And whilst we cannot still be entirely sure that Balluch and the other imprisonned Austrians are not guilty of certain crimes, (which justified their imprisonment), it certainly appears to be widely accepted that they were imprisonned due to a combination of political corruption and the affect they had on the animal exploitation industries in Austria.

Whether his claims that it "sets a new standard worldwide" are justified or not, clearly many movements in many countries would benefit from also achieving similar advances in a similar time-frame....Or, as Francione claims, Balluch's campaigning is actually simply a damaging form of "New Welfare".

I want to avoid this turning into a thread about the merits of direct action, instead I really feel this issue needs to be addressed......Is the term "New Welfare(ism)" too widely used? What does it really mean?

Is targeting one species, for purely strategic reasons, "New Welfarism"? Or is it an effective form of, no compromise, "Abolition" through creating progressive change?

Is targeting a department store that sells fur, but which also sells meat, leather and all manner of other items produced from the exploitation of animals, "New Welfarist"?

When anyone is pressed for a description of a "New Welfarist" campaign they provide examples such as "Happy Meat" and "'Humane' Slaughter", (such as Compassion in World Farming's "On the hook, not on the hoof" campaign against live exports......but these are simply "old" forms of welfarism, are they not?

For me, these words are used all too often without any serious clarification....and whilst "Abolition" is easy enough to comprehend, nearly every activist I talk to has a different idea of what "New Welfarism" is! The reason I raise this is, by dennouncing a relatively undefined form of action we can easily create inactivity as people stop supporting effective campaigns because THEY consider it to be "New Welfarist".

The final thing that I would like to add to the debate is that Balluch suggests:

"Social entities like compassion, empathy and suffering are very important factors to motivate humans to change their behaviour. In contrast, abstract-rational entities, like personhood or rights, do not."

The goal when promoting activism is to motivate people, as it is when we are trying to change someone's social behaviour.....and I would therefore suggest that the same psychological points are applied, and that impying another, (essentially undefined), form of welfarism should be avoided (despite the fact that it is poorly defined), is demotivating to activists in the same way that mentioning "personhood" would be to an inquisitive member of the public!

Welfarism is Welfarism, so what exactly is the difference between "Old Welfarism" and "New Welfarism"?

"Francione argues purely theoretically. He does not provide any data to support his suggestions, and his definition of abolitionism seems to be deontological and not consequentialist, although it is hard to see how a theory on how to act politically should not be solely concerned about whether the action actually does promote the political aim in its consequences or not. "