E.ON Targeted in Sweden in Solidarity with the Climate Camp

An E.ON facility in the working class district of Mollevangen, Malmo was targated to highlight E.ON's plans to build the UK's first new coal fired power station for 30 years. 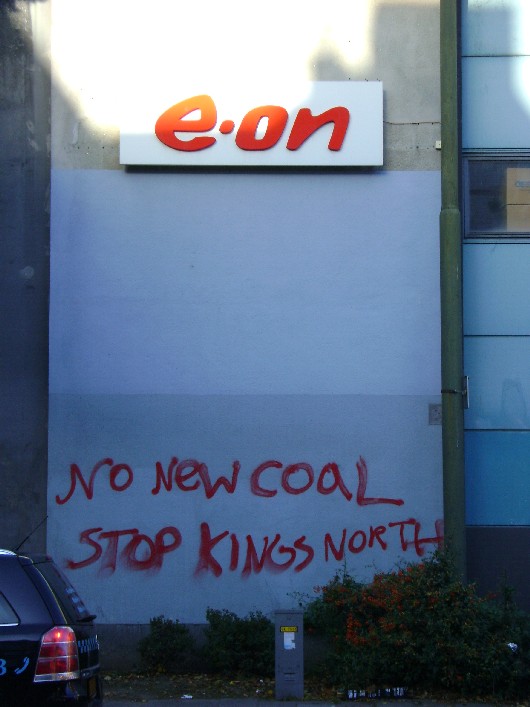 Despite E.ON working extensively on renewables and reducing carbon emissions in Sweden, the company continues to push coal in the UK.

The building of Kingsnorth coal fired power station on the Hoo peninsular in Kent will cause respiratory problems and hazardous wastes in the local area, raise the country's emissions to unsustainable levels, swerve energy supply into non-renewable dirty fossil fuels rather than renewables, and feed a community-fracturing and polluting global coal market which along with the expansion of other fossil fuels threatens the ecosystems of the planet.

The campaign against kingsnorth, like the potential effects of the 8 new coal fired power stations the UK government could sanction this Autumn, is global.

Swedish solidarity steps up to support this campaign in the UK.

The grafitti is at a prominent intersection in the city and will be seen by thousands of people who will question E.ON's green spin and contradiction between its' work in Sweden and its new coal plans for the UK.

For more information about the stop kingsnorth campaign see www.climatecamp.org.uk