POST-ACTION ARRESTS ARE TAKING PLACE - THE LONDON PAPER HAS PRINTED A POLICE APPEAL - KNOW YOUR RIGHTS!
In recent weeks several people have been arrested in connection with the demo against Bush's visit to Downing Street in June, in addition to the 25 people who were arrested on the day of the demo itself. These arrests are continuing - people are still being identified and arrested by the police as we write this on 29th September.

We think it's really important for people who may have been involved to know that this operation is happening and to be prepared. Some of those arrested so far have unexpectedly had their houses raided, and been arrested at home or unexpectedly picked up on unconnected actions or demonstrations. Those arrested are in some cases facing unreasonably serious charges such as 'violent disorder'.

On Thursday 25 September the London Paper printed pictures released by the police of 4 men who they are pursuing in connection with the demo. The article relates people 'thought to be anarchists' trying to 'push through police lines' and makes claims about sharpened sticks being poked into the eyes of police officers.

The police have an operation dedicated to pursuing people from this demo called 'Operation Spring Brook'. The plain clothes police working on this are using footage from several different FIT video cameras which were positioned behind police lines at the demo and also aerial CCTV footage.

This does not mean that everyone who attended the demo is going to be arrested tomorrow. However, we suggest that anyone who was near the front of the demonstration when the police decided to attack protesters with batons should be aware of what is happening and be aware of their rights.

THINGS YOU CAN DO:

1) Tell people you know who might have been on the demo how this situation is developing. Forward them this email including the LEGAL BRIEFING included below, especially if they might not know much about their rights when being arrested. Some people who have already been arrested ended up without solicitors and answering lots of questions they didn't need to answer when they were surprised by the police turning up at their door!

2) If you didn't see the London Paper article with the photos in it and would like to see a copy we can send you one. Email us via

bushdemo@gmail.com and we will email you back. If you are worried about revealing your email address to us you can eg. set up a new email address on Gmail and email us from that.

3) If you have been arrested in connection with this demo and you do not yet have a solicitor contact Bindmans on 020 7833 4433. They are a law firm that sometimes represents activists - explain the situation and see if they are able to represent you.

bushdemo@gmail.com. You can also call up the Stop the War Coalition office as they organised the demonstration - tel 020 7278 6694 or email

office@stopwar.org.uk. They have held one meeting for defendents in recent weeks.

5) Whether or not you were at the demo, if you're interested in doing solidarity work for the people who have been arrested you can also contact us on

6) Contact the London Paper to tell them what you think about their cooperation with this political policing, and the baseless claims in their article. Email

For reports and images from the demonstration, see:
-


YOUR RIGHTS IF YOU ARE ARRESTED

If you are arrested you are entitled to:
- Know what you have been arrested for - ask the police officer who is arresting you
- Access to free legal advice either from a solicitor (some activists use the firm Bindmans - ring them on 020 7833 4433 and explain your situation) or sometimes now via telephone. If you want a solicitor who is sympathetic to activist needs we strongly recommend you don't accept a duty solicitor.
- If you are arrested for a non-imprisonable offence (which maybe isn't very likely in this case) you may have to use telephone advice from CDS Direct or pay for a solicitor's advice.
- Have one phone call made on your behalf informing someone of your arrest.
- Remain Silent - You can answer 'no comment' if interviewed to ALL questions - this may well be to your own benefit (although you can consult your solicitor about this). The police will try to convince you that you have done something wrong, and all their questions will be trying to incriminate you - try to stay strong. You can refuse to take part in an interview or answer any questions until you have spoken to your solicitor. From the moment you are cautioned everything you say is evidence. There is no such thing as a friendly chat. The police are not trying to help you. Do not sign any statements.
- Be offered a translator if English is not your first language.
- Vegan/Vegetarian Food if you want it
- Not give your name, address or date of birth. This may however delay your release, and if you have been charged and refuse to give these details you are unlikely to be given bail (ie. be released until you have to appear in court). The police may well try to ask you lots of other questions - eg. your hair colour, height, place of birth, favourite film etc, and may even present it as just filling in a questionnaire - but you do not have to answer these questions and it should not be a reason not to grant bail. This can be hard to do especially if they are friendly about it - but it is your right to decline to answer and ask them to come up with their own answers to their questionnaire.
- Request a medical examination if you feel unwell.
- Inform the custody officer if you are on prescribed medication. You may be permitted to take it.
- Your photograph, fingerprints and DNA may be taken without your consent.

For more legal information see the website of the Activist Legal Project:

INSIST ON YOUR RIGHTS! (otherwise you won't get them)

If you were at the demo and are worried about being picked up, you might want to know that when the police have raided people's homes, they've been looking for the clothes that protesters were wearing on the day. There've also been several cases of them taking people's mobiles.

Also, they're only allowed to search your home if they have a warrant. If they can't show it to you, don't let them in. 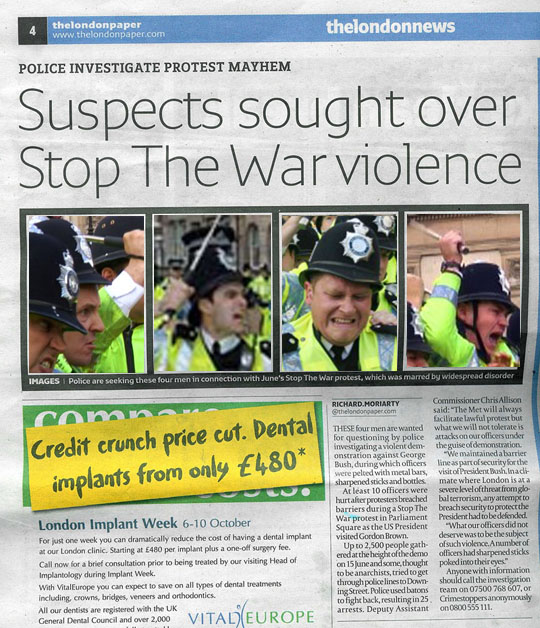 Some later editions of the London Paper contained a revised version of the article.

What are STWC doing about this or at least what is their stance/support?

there appears to be nothing about this on the STWC website. So maybe it's business as usual.

that's on the web