Nuclear protesters in court on same day, so early protest to support comrades

Monday 20/10/08 our comrades are in court. They used lockons outside rolls royce nuclear plant, rayesway, derby. Due in court 20/10/08 - support them and come to early morning protest. 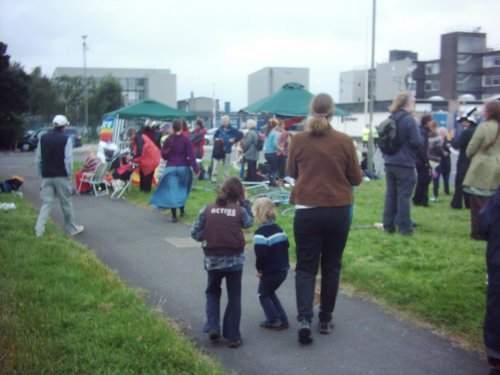 Our comrades are in court for crossing the so called government red lines .they were locked in concrete blocks .it took police 4 hours to free them . on the tarmac outside rolls royce are red lines .the tarmac is provided out of ratepayers money .not r,r .if you cross it it is illegal .when taking a driving test .does the highway code mention red lines? how many people in the street know what they are for? the illegal trident weapons banned by the UN, but as usual not america .are stored uranium .as more close by is b.o.c they store gases in bottles calor oxygen acetylene propane - all lethal to bomb makers .1000 yards away is celanese chemical and acetate plant, so many dangerous chemicals on premises. There is a benzene tank, acetate, acids, stuff I've not heard of .there have been many fires and explosions ,the last one /the benzene tank .,22 fire engines and special units .a 7 hour battle they claimed was a overheated valve yet they sealed Spondon off .this factory was on the i.r.a list and other terror groups .all 3 premises can be got in with ease .security is poor .all are in flood plains and getting worse as new buildings go up, so come along and support the protest on the 20/10/08 /. pickup points derby station & spondon station .safe parking on private land .transport each way /pete 07727226032 /email